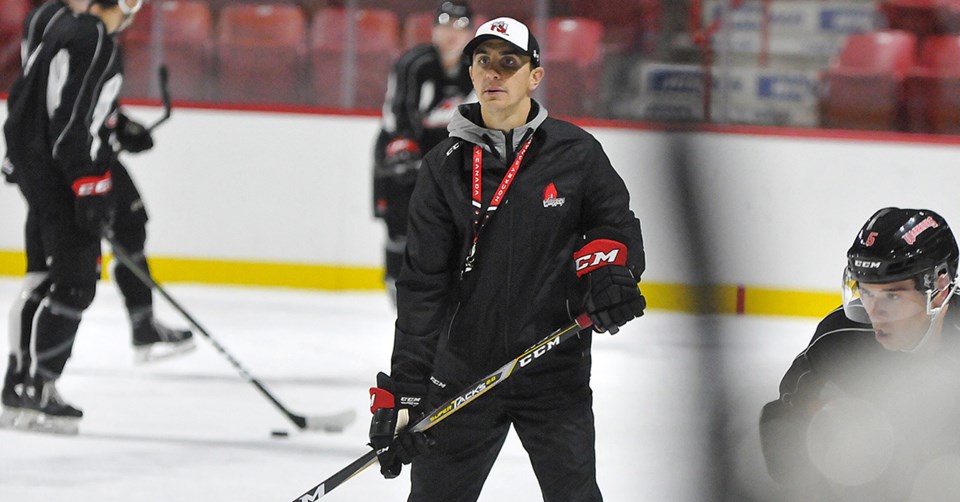 Moose Jaw Warriors head coach Mark O’Leary is looking to see his charges take a step forward this season.
If everything had gone according to plan this season, the Moose Jaw Warriors would right now find themselves contending for a playoff position if not much, much more as the final weeks of the Western Hockey League regular season drew to a close.

It would have all been the product of a tough year spent learning how to play in the Western Hockey League, and a reward for all those nights where things didn’t go their way last season.

Of course, nothing has been normal or usual over the last year, and especially over the last six months when the WHL would have been in high gear.

But that hasn’t changed the expectations for the Warriors in any way when their pandemic-delayed schedule kicks off against the Brandon Wheat Kings on Mar. 12 in the Regina hub.

They want to be better. Much better.

And they’re plenty confident they have the horses to pull it all off.

“I think as coaches we’re all looking forward to seeing the product on the ice,” said Warriors head coach Mark O’Leary. “I know certainly we look at it as a positive that we have so many guys coming back, we got kicked in the teeth a few times last year, but we got back up and dusted ourselves off and I know the players were looking forward to the off-season.

“I’m expecting we’ll see a lot of improvement in terms of where the players are. I know they got another year older but that doesn’t always equate to another year better, so we’ll see how it looks and there will be a lot of competition for playing time this year, for sure.”

The Warriors finished last season with the second-worst record in the WHL at 14-44-4-0. But they were also the youngest team in the Canadian Hockey League, a factor that has led to the entire team returning this season outside of their graduated overagers.

One of those is fourth-year veteran Tate Popple, who spent his rookie year with the Brett Howden-led Scotty Munro Trophy-winning crew that won 52 games in 2017-18. He carried a large presence on the team last season and is one player whose leadership will be crucial this season.

“Tate Popple is huge for us,” O’Leary said. “He was the glue that kind of kept things together in the dressing room last year, going through a tough year, and he was great between the coaches and the players. He’s a mature guy that’s been in the league for a long time and knows what it means to be a Moose Jaw Warrior, so he’ll pick up where he left off in his leadership role.”

But make no mistake, this is Daemon Hunt’s crew to captain. The Minnesota Wild draft pick carries a huge level of confidence in his game and is looking forward to wearing the ‘C’ for the Tribe this year while showing some of the younger players what it takes to reach the next level.

“It’s his team now, he’s an 18-year-old with a lot of influence and between him and (NHL first round Draft prospect) Ryder Korczak, they’re two high-profile players who certainly have a big say in whether we win or lose,” O’Leary said. “Then Calder Anderson and Logan Doust, with their leadership skills, I feel really confident about our leadership in the room.”

Popple, Korczak, Anderson and Doust all serve as assistant captains through the campaign.

Then there are young up-and-comers in the line-up.

NHL Draft prospect Eric Alarie will lead a talented crew of 17-year-olds that includes Moose Jaw Minor Hockey product Atley Calvert alongside the likes of fellow rookie forward Jagger Firkus, 16, and defenceman Denton Mateychuk — all of whom showed flashes of brilliance when they took the ice with the Warriors last season.

“Those are some good young players, and they’ll have a good chance to show what they can do,” O’Leary said. “We want to make sure we’ll have a good product this year and we’re doing things right, but we know there’s a building process towards next season where we could be super competitive.”

It would most certainly be remiss not to also touch on Brayden Yager.

When the Saskatchewan Male AAA Hockey League officially closed down for the season late last week, that freed up the Saskatoon Contacts 15-year-old standout and 2020 WHL Draft third-overall pick to join the team for the full 24-game campaign. A rather ironic turn of events, considering Yager had applied for exceptional player status to play the full 68-game season last year but was turned down.

“Yager, I’ve been watching a lot of video on him here the last little while, he’s special and he’s going to be able to work his way up the line-up as well,” O’Leary said. “With the different stipulations with minor hockey not up and running, he’ll have just as much opportunity as any other player to move up the line-up and battle for ice time.”

Boston Bilous, 19, is the defacto starter in goal for the club while rookie Brett Mirwald, 17, will move up from the Saskatoon AAA Blazers as his backup.

Overall, it’s all a matter of adjusting to the strange circumstances surrounding the Regina hub, staying healthy both on and off the ice and doing everything possible to take another important step forward.

“It’s finding that balance,” O’Leary said. “We have three overage players (Popple and off-season acquisitions Riley Krane and Brad Ginnell) who have put in their time in the league and we certainly want to make sure we’re doing everything we can to give them a season as well, they want to go on to bigger and better things.

“But it shifts a little bit more to the development side and we have to make sure we’re giving these players a chance to improve and take another step toward what our ultimate goal is.”

The one last bit of good news is the Warriors and their fans now know exactly when and who they’ll be playing after the league officially released the East Division schedule on Wednesday morning.

“It’s going to be 24 games in 47 nights, so it’s going to be basically playing twice every three days and an hour of practice allotted for each team in between,” O’Leary said. “It’s a busy schedule, but it’s definitely one we’re looking forward to.”