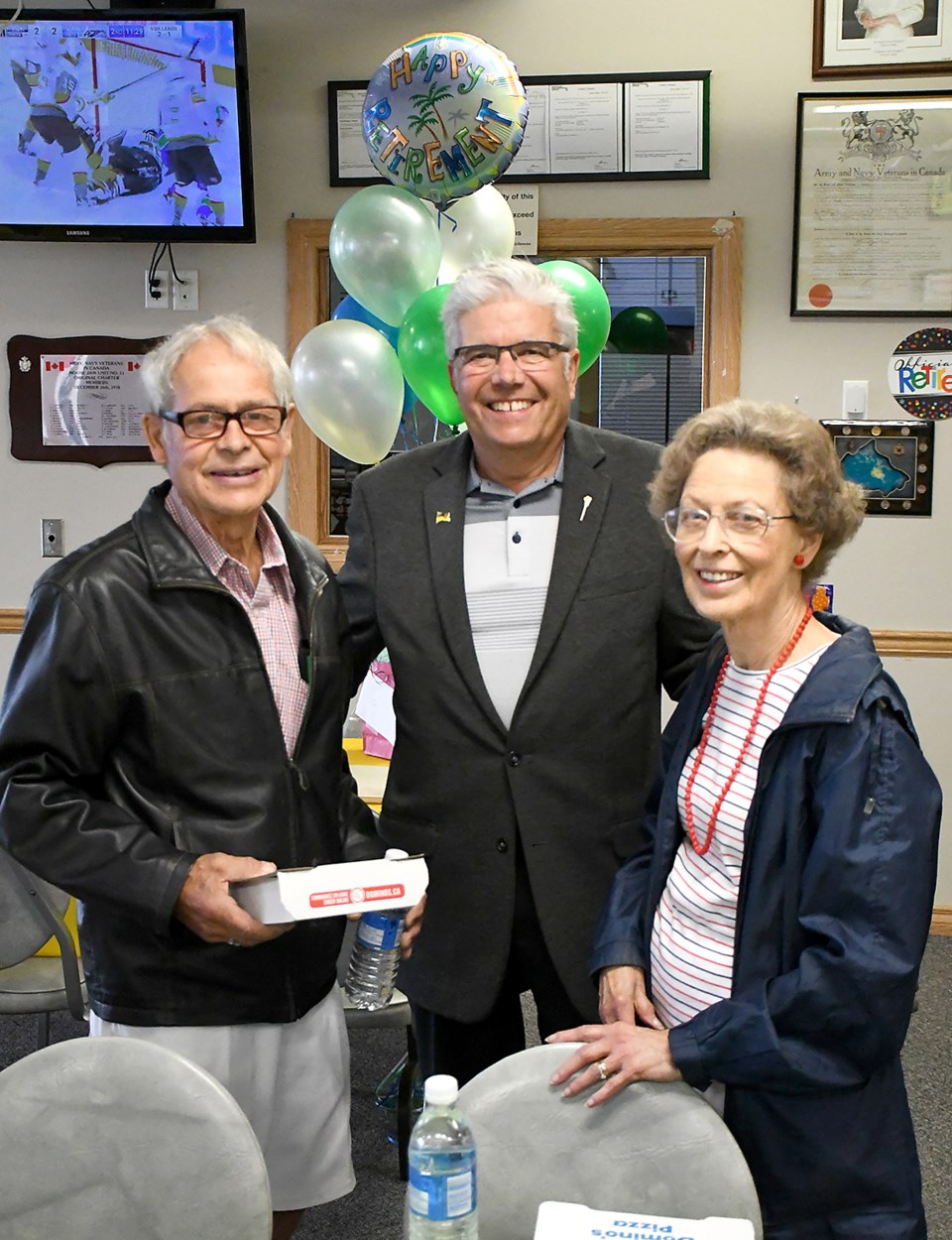 Warren Michelson pauses for a photo with Rudi and Lee Fast during his retirement party on Wednesday night.
When the Government of Saskatchewan brought their three-week sitting of the provincial legislature to an end this past July, it came as a bittersweet moment for Moose Jaw North MLA Warren Michelson.

It would mark the final time the long-time Sask Party representative would be part of the official government process in Regina and mark the home stretch of his 13 years representing his constituents in the community.

On Wednesday night, it all became just a little more real during a retirement party thrown by his office assistants at the Anavets Club.

Of course, it wasn’t the kind of shindig you’d expect for someone who served their community for almost a decade and a half — COVID-19 restrictions kept the gathering small and the many well-wishers rotated through throughout the evening.

But it was a chance to offer thanks to someone who had been a part of the city and a mainstay at local events throughout his entire tenure as MLA.

“It has been very rewarding, and it’s with mixed feelings that I depart because there are some things I’d like to see completed, but that will always be there,” Michelson said as supporters began to gather. “I’ve tried to represent the people and the issues they’ve brought to our attention, whether it was health or social services or whatever it might be. And I appreciate the people who supported me all these years, not all of them can be here tonight but some will be, and it’ll be hard to say goodbye.”

Michelson was first elected in October 2007 and announced in January of 2019 that he would not be seeking a fourth term in office. What happened between those two dates — and the government assistance he helped procure — changed the face of Moose Jaw.

The largest project, of course, is the Dr. F.H. Wigmore Hospital, which was announced in 2011 and officially opened its doors in 2016. Then, of course, you have the Mosaic Place and YaraCentre facilities that have brought many high profile events to the city. And that’s all on top of the many smaller projects that helped build and improve the social fabric of the community.

And through it all, Michelson was there.

It was almost impossible to attend any event with any kind of profile without seeing him, offering his support to charity events and anything of remote importance.

That’s something Michelson says he’s going to miss most once things are officially wrapped in his political career — and something he, unfortunately, had a preview of through the summer of COVID-19.

“I’m going to miss all of that, and in fact with COVID the way it is, with all the events that were cancelled, it was tough,” Michelson said. “Whether it was the Wednesday night Concert in the Park or Motif, obviously the fair and parades, just being at the events that go on in Moose Jaw, and there’s a lot of them, that was always fun… just being in the community and part of it all is definitely something I’ll miss.”

Michelson’s retirement plans haven’t changed much from when he first made his retirement announcement — that ’69 Pontiac still needs work, there are still plenty of projects around the house that have to be completed, and those grandkids still need spoiling.

But don’t be surprised if you still see him out and about, just maybe not in his usual dapper suit and tie.

“Maybe I’ll volunteer at the greenhouse next spring or at the golf course,” Michelson said. “There are lots of opportunities, the Sukanen Ship is out there and the Western Development Museum. There’s always something to do and I’m sure I’ll find something to keep me busy.

“But it’s time to move on, and I’m happy with how things went in my time in government.”