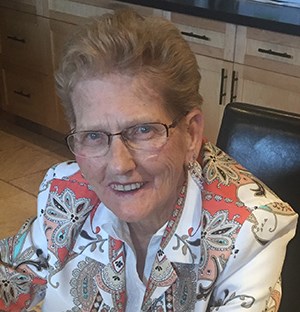 Viola was born in Bengough Saskatchewan on July 6, 1933 and attended school in Big Beaver. Upon graduation she worked as a nurse’s aid at the Coronach Union Hospital during which time she met and married Russell and then commenced the full time job of being a farmer’s wife and raising 5 children. During this time she also worked at various jobs including school bus driver, sales clerk at the Co-op Dry Goods Store, she also served on the Board of Directors of the Coronach Co-op and when the children were grown and starting to move on she trained as a hair stylist and set up shop as a hair dresser in Coronach. Viola and Russell enjoyed camping, travelling in their motor home and square dancing. They sold their farm in 1986 and moved into town. Later they moved to Moose Jaw initially residing in South Hill and later the Mulberry Estates Senior’s Home in north Moose Jaw. Viola lived a full and active life and will be sorely missed by her family and friends.

The Funeral Service for Viola will be held on Friday, September 27, 2019 at 1:00 PM in Moose Jaw Funeral Home. Reverend Doug Shepherd will officiate. Interment will take place in Coronach Cemetery. Flowers are gratefully declined, as an expression of sympathy donations in Viola’s name may be made to The Moose Jaw Health Foundation 55 Diefenbaker Drive,  Moose Jaw, SK S6J 0C2.