Nine-time provincial champion passing on incredible legacy of Scotties success
0
Dec 1, 2019 3:39 PM By: Randy Palmer
Previous Next
Michelle Englot delivers her first stone in the sixth end against Team China during the Saturday afternoon draw.
Expand
When Michelle Englot won her first Scott women’s curling provincial championship as Michelle Schneider way back in 1988, little did she know it would kick off a legendary career that would see her winning titles three decades later.

Different rinks, different teammates and even a different province, but in the end Englot has always seemed to find a way into contention. And that’s led to no less than nine appearances – eight for Saskatchewan, one for Manitoba – at the Scotties Tournament of Hearts over the years.

So when the veteran skip shows up at any kind of a tournament in the province, you can bet there’s a fair amount of interest in seeing her play.

Englot and her Regina Highland foursome were in Moose Jaw this past weekend for the Saskatchewan Women’s Curling Tour stop at the Moose Jaw Ford Curling Centre. They ended up reaching the playoff round before falling to Regina’s Ashley Howard in the quarter-finals.

Maybe not the perfect weekend, but still as positive a result as can be – especially when the focus is just as much on enjoying the game as much as it has been outright winning.

“It’s been fun, a really fun season for me,” Englot said shortly after losing a hard-fought 7-4 decision to China’s Ya Han to close out the round robin. “I really enjoy playing with the girls, they’re great to be around. We haven’t put a lot of pressure ourselves, we’re mainly playing close to home and having fun.”

A major part of that is who she’s playing with. Englot is taking the ice with Sara England, Shelby Brandt and Stasia Wisniewski, a group of youngsters looking to start building their own legacy in the sport. 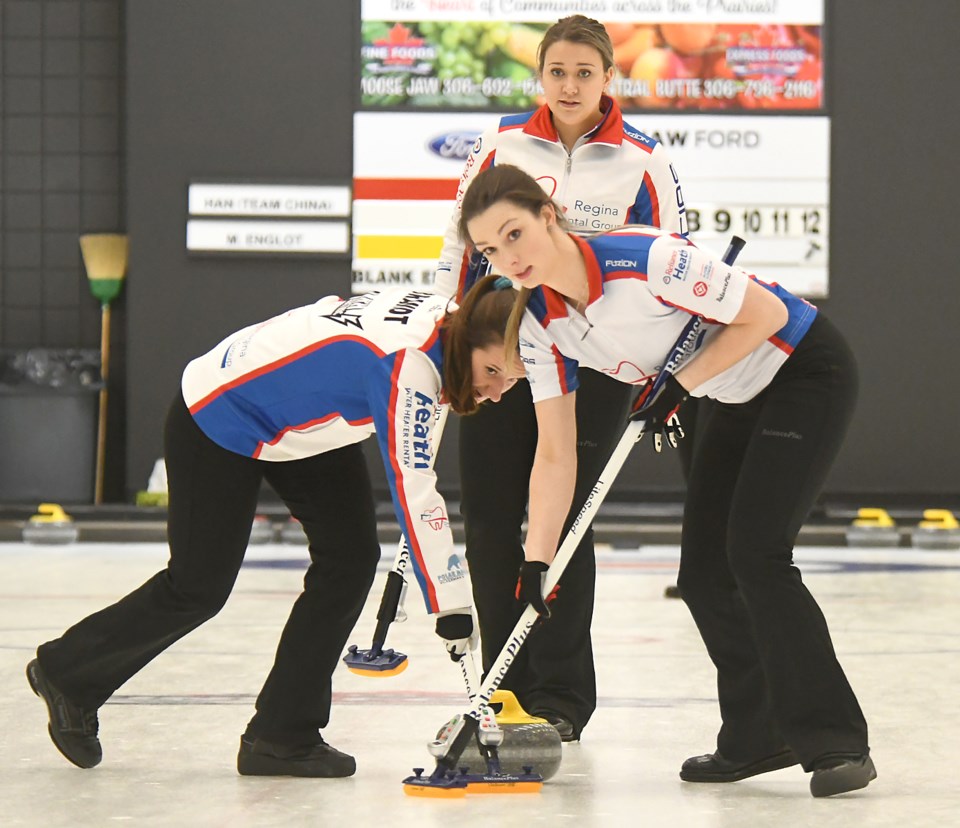 Sara England follows her shot as Shelby Brandt and Stasia Wisniewski sweep.
Even with a crew of kids, they still have Michelle Englot as their skip. That experience at some of the highest levels in the game – both in the Scotties and on the World Curling Tour – has helped through the early part of the season.

“It’s different with every team and with this team we’re still building and learning each other’s habits and stuff like that,” Englot said. “So, basically, when you have a new team you start from scratch, but the experience definitely helps with strategy and everything.”

Making things all the more interesting is who her third is – England is the daughter of Sandra Schmirler, one of Englot’s greatest intra-province rivals alongside Saskatoon’s Sherry Anderson.

Schmirler, of course, is the legendary Scotties and Olympic champion who passed away in 2000 after a long battle with cancer. The 2020 Scotties Tournament of Hearts in Moose Jaw will mark the 20th anniversary of her death.

Englot has been sure to pass on all sorts of tales of the days of yore when she and Schmirler were duelling almost annually for Saskatchewan supremacy.

“Definitely, stories like that have come up and I think Sara is a sponge for stuff like that since she never really got to know her mom,” Englot said. Sara was three when her mom passed. “I think it’s good for her to hear some of the stories from the old days, and we definitely have a lot of them.”

Those wars were part of a whole ‘steel sharpening steel’ thing that was happening in the province at the time, where the competitive level had risen so high that extraordinary measures were needed just to stay in touch with the opposition.

“I think it was a combination [of making each other better] and we made curling better across Canada,” Englot said. “It was our teams that first started to practice hard and start to put the time in off the ice, I think it was both for sure.”

The duo never fully joined forces, but they did come close.

“I went to the ‘87 Scotties as their fifth,” Englot said, pausing before adding with a laugh, “well before my teammates were born.”

One thing all that experience brings – having played in Scotties national tournaments over four decades – is an eye for how things have changed over the years.

“But it’s always a lot of fun and a great experience.”

The 2020 Scotties runs from Feb. 14-23 at Mosaic Place. Ticket packages are available and can be found at https://www.curling.ca/2020scotties