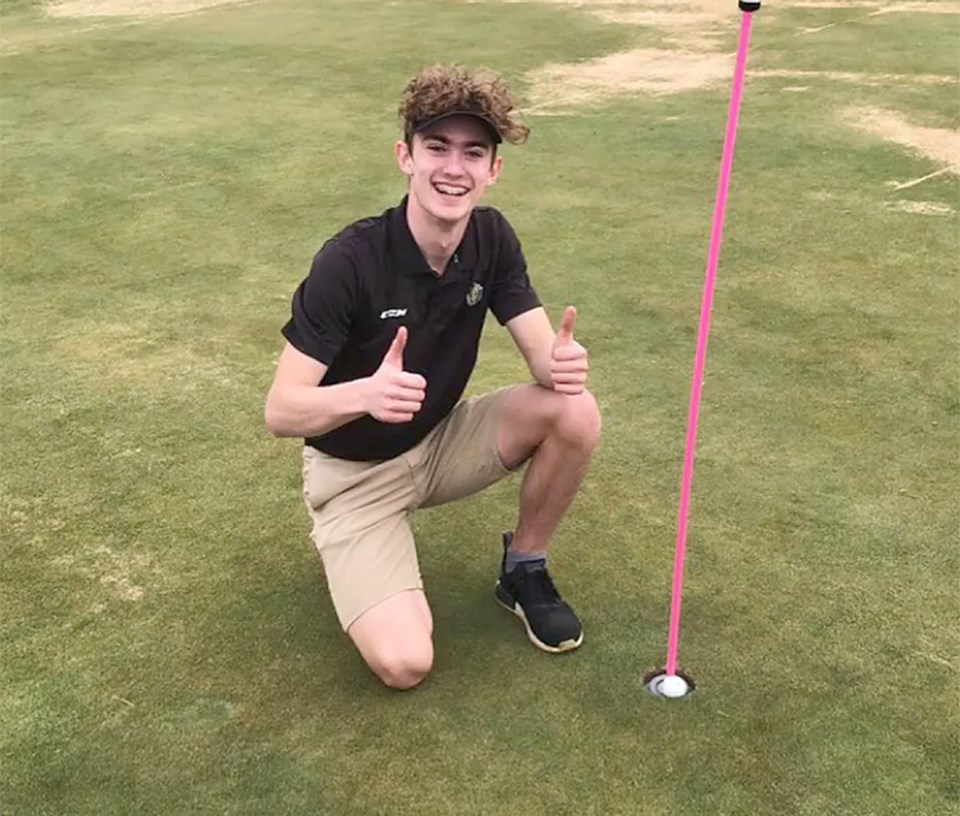 Ben Peterson celebrates after finding that yes, his ball did stay in the hole after his tee shot on the fifth hole at the Lynbrook Golf Course.
With the way things are set up for golf throughout the province due to COVID-19 restrictions, it stands to reason that dropping a hole-in-one is going to be a little more difficult.

The chief issue being with the way cups are raised up in holes, it’s all but impossible for the ball to drop if it’s carrying any kind of speed.

Throw in windy and cool conditions on top of it all, like this past Sunday at the Lynbrook Golf Course, and things become almost impossible.

But for 17-year-old Ben Peterson, it was all just a minor inconvenience.

Peterson became the first player to hit an ace at the Lynbrook this season on May 17, knocking in a seven-iron from 169 yards out on the par-three fifth hole.

When his shot hit the green, Peterson didn’t think there was much of a chance of it dropping.

“I hit the ball and it went past the hole, but it’s just in front of a little hill,” he told MooseJawToday.com/Moose Jaw Express in describing the shot. “So it hit there and started rolling and just went perfectly into the hole… I didn’t think I’d ever get it, because with the cups being raised it would have to go so slow just to get in there.”

That kicked off a mad dash off the tee box for Peterson and playing partners Carter Benallick and Sheadon Prebushewski to verify what they had just saw. Shaun Jordan, meanwhile, was on the next tee box and saw the whole thing, giving the proceedings another witness.

And when they got to the green?

“It was just barely sitting in the hole,” Peterson said. “Oh man, me and my friends were ecstatic. And the funny thing is, on that tee box we were literally talking about how cool it would be to get a hole-in-one. Then I was the first to tee off, and we were just so shocked that it had gone in.”

Interestingly enough, Peterson — who had actually purchased a membership that day and has played three rounds already this season — only has two years of golf under his belt.

Other than the cup situation, COVID-19 restrictions haven’t played much of a factor into how things have gone on the course so far this season. In fact, one of the largest areas of contention, 12-minute staggers between tee times, might have played into Peterson’s shot.

“I really like having that time, there’s no one really in front of you or behind you, so it kind of works out perfectly,” Peterson said. “You’re playing your own game and you can play at your pace, it makes it a lot of fun.”