Warriors take one on chin from Tigers

Medicine Hat puts up 51 shots in 6-0 win at Mosaic Place
Nov 30, 2019 5:43 PM By: Randy Palmer
Previous Next
Medicine Hat’s Brett Kemp attempts to slip a backhand pass between Warriors goaltender Adam Evanoff and defenceman Cole Jordan.
Expand
When you’re a rebuilding team, there are going to be nights like this.

The Moose Jaw Warriors looked every bit like a squad with a line-up made up of  mostly 17-year-olds taking on a team looking to make a decent playoff run on Friday night at Mosaic Place as they dropped a 6-0 decision to the Medicine Hat Tigers.

It was one of those game where the scoreboard told the tale, too.

The Warriors were outshot 20-2 in the first period and saw the Tigers take a 3-0 lead out of the frame. That’s right, the dreaded ‘the other team could have played without a goalie and still had the lead’ scenario.

Things weren’t much better in the second, as Medicine Hat would hold a 34-8 edge on the shot clock before the Warriors managed a bit of a pushback in the third. It wouldn’t be enough to break through, though, and Tigers goaltender Mads Sogaard would need only 15 saves on the night to earn the clean sheet.

“I thought our third period was good but I was definitely disappointed in our effort for the first two periods,” said Warriors newly minted captain Owen Hardy. “It was just not what we wanted as a group, but there’s a lot of things we can take from it. We’re an extremely young team, everything is a learning curve, so I think we can just learn from it and get better, that’s all we can do for now.”

Hardy was quick to point out that even with the youth in the line-up, it was the overall team effort that led to the loss.

“I don’t know if there’s much to be said, it’s not just the young guys, we’re a team and we can’t just put the blame on them, myself included,” Hardy said. “It’s everybody, not a few individuals, the whole team as a group.” 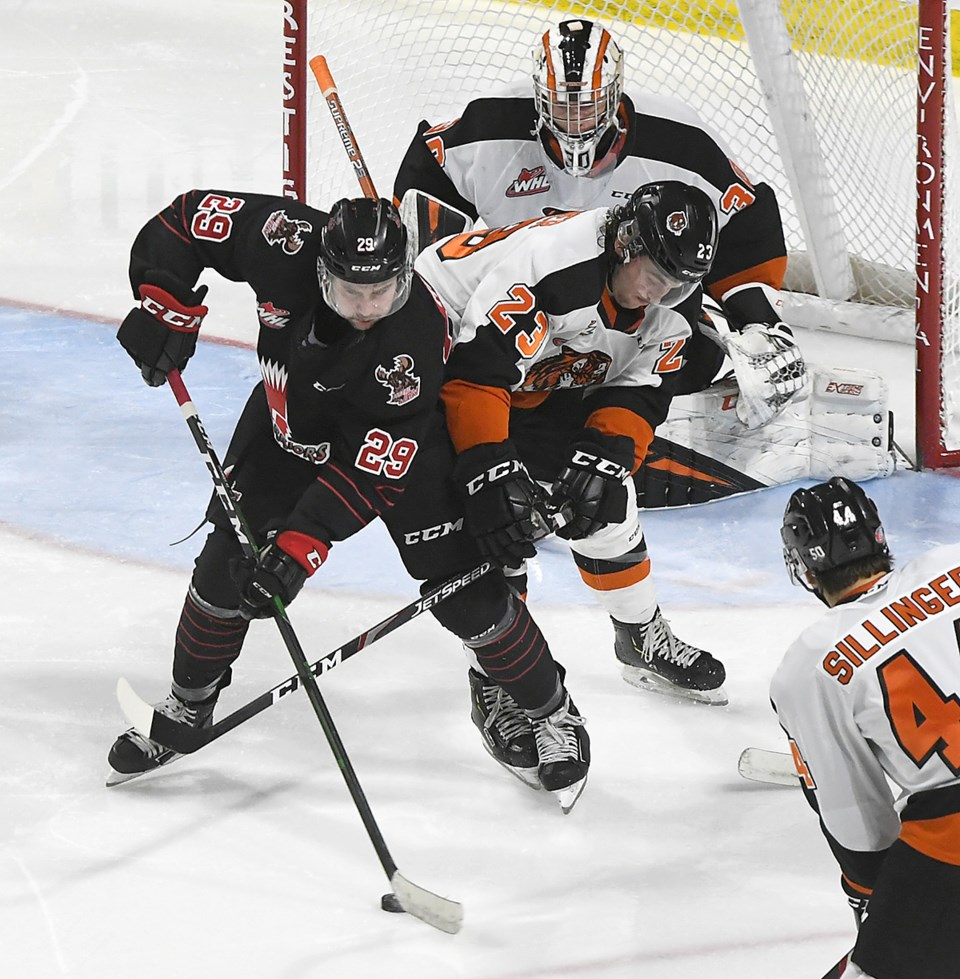 The Warriors’ Kobe Mohr battles for the puck in front of the net with Medicine Hat’s Bryan Lockner.

The lack of scoring opportunities was naturally a concern for Warriors head coach Tim Hunter, who would have also would have liked to have seen a better showing in competitive spirit and work ethic.

“We weren’t shooting the puck enough in the beginning of the game, we turned down shooting opportunities and that changes things when you shoot the puck a bit more for how teams defend,” Hunter said. “But compete and work is the base of everything and I don’t think we were good in either department tonight. I know it’s a lot and we have to teach how hard you have to compete, and that’s on us as coaches. But the work is simple and it doesn’t take any skill or brains to work hard, so I’m disappointed in that.”

Hunter pointed to one example where a better decision could have been made.

“A young guy comes down the wing on a two-on-one and he’s on his off wing, so it’s a perfect time to shoot the puck,” Hunter explained “He makes a rink-wide pass on his backhand, and as a 17-year-old you don’t have a very good backhand, so why even do that instead of putting the puck on the net. And then we have to be willing to get to the front of the net as well.

“They’re a better team than we are, but you don’t allow the other team to have opportunities by your failures, make them beat you with hard work and skill and they didn’t have to do that tonight.” 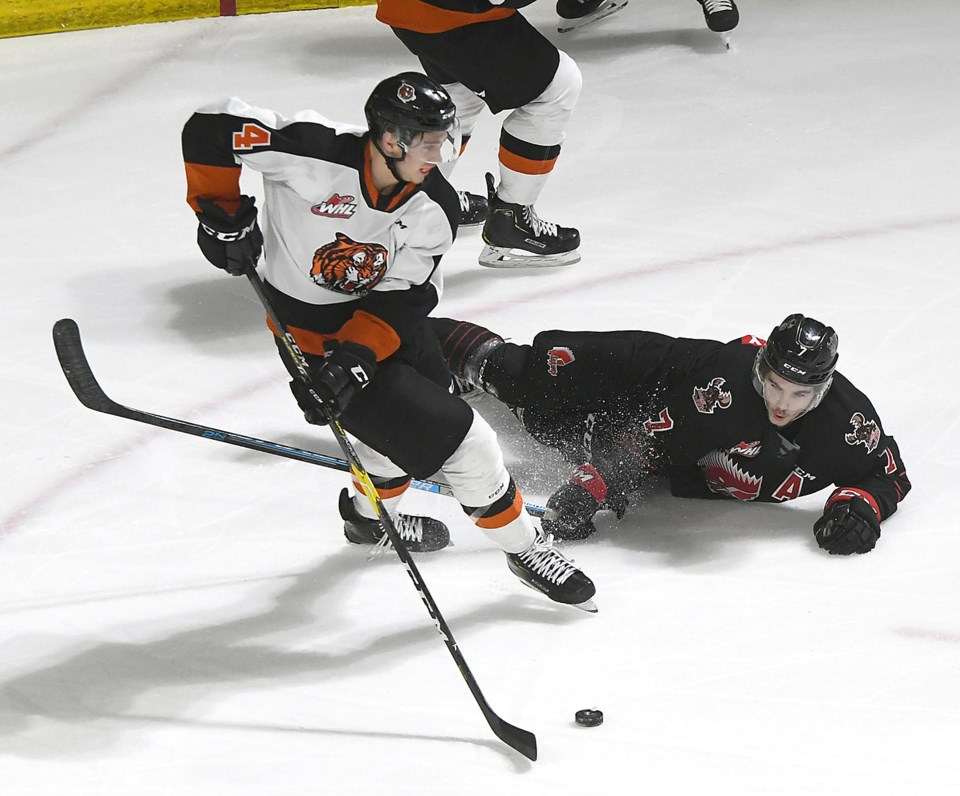 Warriors forward Brayden Tracey attempts to knock the puck away from the Tigers’ Daniel Baker after being tripped up at the side of the net.

The loss was the fifth-straight for the Warriors, who haven’t score more than one goal in a game in their last four outings and haven’t had more than three going back nine games to Nov. 1 and their 5-1 win over Red Deer.

Adam Evanoff faced 51 shots total on the night and was named the game’s third star.

The Warriors’ schedule picks up this week, as they play four games in five night with stops in Edmonton and Red Deer on Tuesday and Wednesday before hosting the Rebels and Prince Albert Raiders Friday and Saturday. Both games are at 7 p.m. at Mosaic Place.