General manager to close out time with Tribe during upcoming schedule of games, take over as Director of Player Personnel for Program of Excellence
Feb 23, 2021 5:13 PM By: Randy Palmer 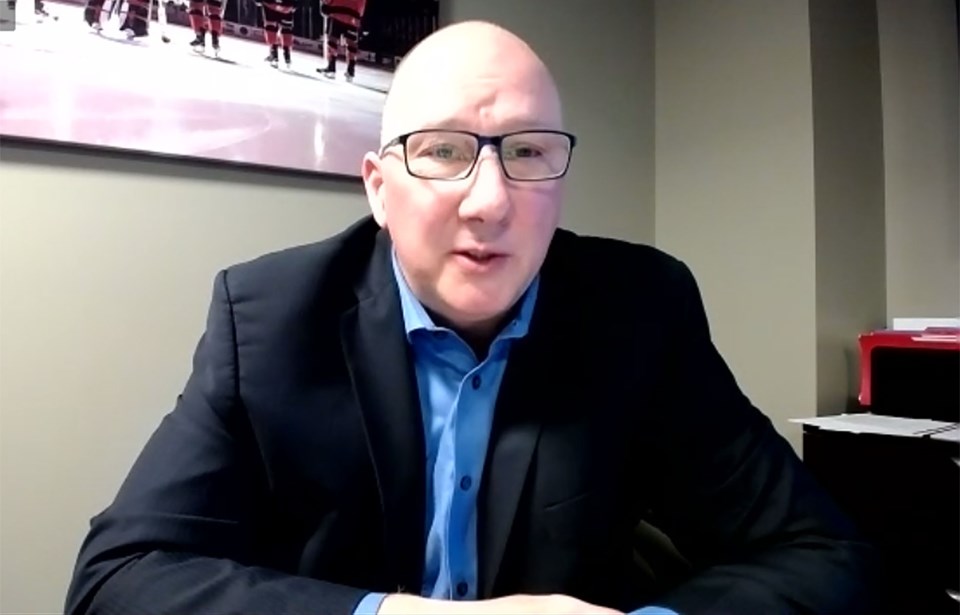 From the overall strength of the front office, to the solidity of the franchise financially and right into the overall player culture and ‘feel’ around the team, the Warriors are a much, much different crew than they were when Millar took over in 2010.

So when Millar and the Warriors announced Monday afternoon that he’d be leaving the team to join Hockey Canada as the Director of Player Personnel for the Program of Excellence, well, it was met with plenty of mixed emotions.

“Alan and I got to know each other right off the start, I was on the hiring committee back in those days and picked him up at the Regina airport,” Warriors president Chad Taylor said. “And I remember how confident Al was in that interview and we knew right then he was going to be our next general manager.

“For the last 10 years, Al has grown this organization, he’s brought a number of cultural changes to the Moose Jaw Warriors. You look at how we play today versus the years before (Al arriving), his big focus was speed, skill and player IQ and I think he delivered. Then transitioning to Mosaic Place from the Civic Centre, there are a lot of great memories of where we were and to what we’ve grown into.

The ‘grown into’ part is one of the true success stories in the WHL over the last decade. Once a team that occasionally found itself in tough times on the balance sheet, the Warriors now regularly turn a profit, to the point the league considers the team a ‘mid-market’ franchise on par with teams from much larger centres.

And while that’s all a source of pride for Millar, you wouldn’t know it from the Zoom conference. No, it was all about all the help he received along the way, from the board to the community to the staff and players. In fact, he’d likely still be thanking folks if it wasn’t for the presser time constraints.

“What can I say, the last 10 years have flown by,” Millar said. “It’s been a great experience both personally and professionally. When I look at the great people that I’ve met here in Moose Jaw and the Western Hockey League and I’ll certainly move on here with lifelong friendships that I look forward to continuing for years to come.

“I’ve been involved with the Canadian Hockey League for a long time, between my time as a manager in the OHL and tenure in Moose Jaw. I’ve really enjoyed my time in this league, and as Chad knows over the years, there has been the odd phone call about other opportunities, but it was only going to take something I felt was a special opportunity to have me wanting to think about leaving the Moose Jaw Warriors, and I was presented that opportunity by Hockey Canada.”

The reason it was going to take something special to pry Millar away from Moose Jaw is a good one.

“What can I say, the last 10 years have flown by. It’s been a great experience both personally and professionally. When I look at the great people that I’ve met here in Moose Jaw and the Western Hockey League and I’ll certainly move on here with lifelong friendships that I look forward to continuing for years to come."

“I think this is one of the best franchises in the CHL,” he said. “I know it’s in a smaller market but when you consider the support and the passion of our fan base, the dedication of our corporate partners… like any manager in sports, I’m sure the fans didn’t always agree with the moves we made, but I know we always did it with the best interest in mind to win a championship, and good or bad they always supported the team and that sure was important.”

The team’s evolution into what it is today didn’t happen overnight, of course. It took time, building on a desire to win from year to year and creating a situation where players who stepped into the Warriors’ dressing room knew they were entering an environment focused on positive results.

“We really challenged each other, the professionalism of the organization and how we treated people, the continuity within the staff and having long-tenured people here, whether it was on the coaching side or in the front office, doing things the right way was real important,” Millar said. “I feel good that we’ve accomplished a lot of that, and it wasn’t just me, I’ve worked with a lot of great people and had a lot of great support from our board.”

So, just what does the Director of Player Personnel for the Hockey Canada Program of Excellence do?

A whole heck of a lot.

Millar will be one of the people in charge of player personnel, player evaluations, camp rosters and team rosters for every team under 20 in the national organizing body’s umbrella of work.

That includes the National Junior Team, U18 World Championship team, Hlinka Gretzky U18 team and the U17 World Challenge program — essentially, if you’re an up-and-coming player looking to play for your country, Millar will have set eyes on you at some point.

“It’s a unique position, where it’s not only a lot of scouting and managing on the player personnel side, but an opportunity to lead programs and manage teams in the Program of Excellence,” Millar said.

“I’ve had the honour even back in my time in the OHL of being on (general manager) committees putting Canada-Russia rosters together, joining the Hockey Canada management group and learning how they do things… It’ll be a lot of travel, tracking the players and working with the staff in Calgary, it’s all something I’m looking forward to as well.”

For now, Millar will continue to work with the Warriors through the upcoming 24-game hub schedule in Regina but will also be in contact with Hockey Canada. He and wife Kelly will be moving to Calgary in the off-season, likely sometime in July.

The Next General Manager

Fortunately for the Warriors, Millar’s decision leaves the team on a decent footing even while opening a tremendous hole. With more than seven months until the 2021-22 season, vetting candidates and choosing the best fit for the job can take place at an unpanicked pace.

One of the first candidates, naturally, will be current assistant general manager Jason Ripplinger, who has held his position since the 2018-19 season and has over two decades as a scout and director of player personnel in the WHL.

“The board has a decision to make, but we have time on our hands,” Taylor said. “We can get through this hub and the 24 games and then look at this organization and see where everything fits. The bigger question is if Mr. Ripplinger is ready to take on the new role, I’m looking forward to sitting down with Jason and see what his thoughts are, and I’m sure he’ll be interested in the job. We’ll follow our due diligence and my job is to make sure we bring the best person forward before making a decision.”

One thing that’s for certain, Millar won’t be leaving the Warriors in his rearview mirror.

No, when you’ve invested as much time and effort as he has in the team and trying to build a winner, you’re going to be very interested in how your project looks going forward, even if you’re not at the helm.

That’s especially true for the current crew of Warriors, who are in year two of a rebuild that could see plenty of positive results in the near future.

“I’m excited about where the team is at, after the 2018 run we put a plan in place to get our house back in order,” Millar said, referring to major trades that sent all-star defenceman Jett Woo to Calgary and NHL first round draft pick Brayden Tracey to Victoria.

“As we’ve always done here with this management group, we didn’t want to just get by, we tried to make tough decisions and there were some peaks and valleys, but we wanted to put groups together to try and win a championship… I wanted to win here so bad, and 2018 will haunt me a bit in terms of how close we were, but in terms of moving forward, there’s a lot of very good young players here, lots of picks.”

That’s why Millar will be keeping close tabs on the Mark O’Leary-led crew the next few seasons, at least.