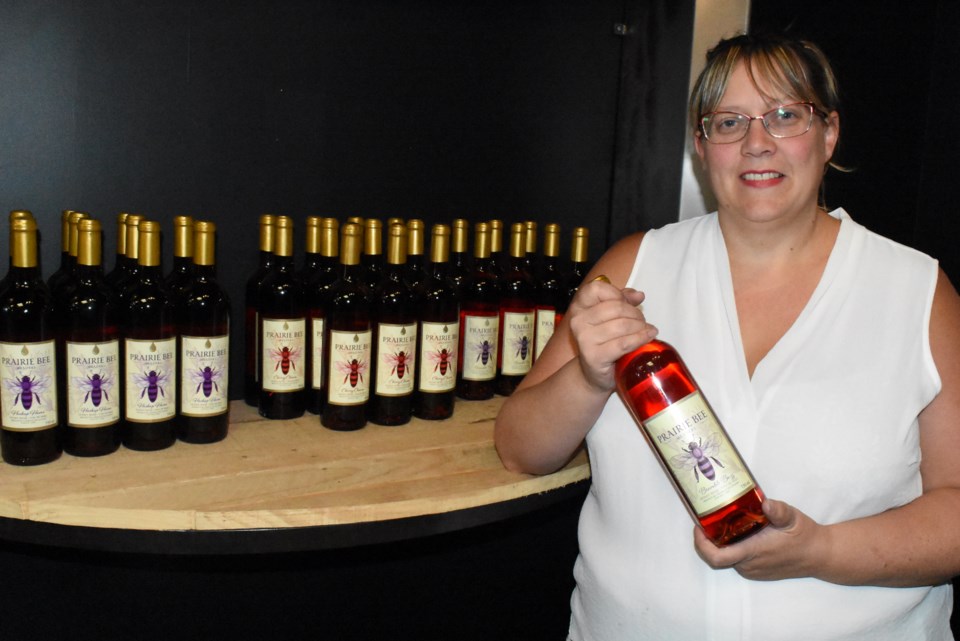 Crystal Milburn, co-owner of Prairie Bee Meadery, shows off the latest type of mead — Bramble Buzz — that the business recently brewed up. The company has received a federal grant of $100,000 to help purchase equipment to make a new type of mead that is similar to champagne. Photo by Jason G. Antonio

Moose Jaw’s Prairie Bee Meadery has received a $100,000 grant from the federal government to help purchase equipment so it can offer a new type of sparkling wine.

“We’re really, really excited,” said Crystal Milburn, co-owner of Prairie Bee Meadery. “It’s a fairly sizeable project we’re taking on, one we’re hard at work on and have been for the past several months.”

Regina-Wascana MP Ralph Goodale made the announcement in Regina on July 25. Prairie Bee Meadery was one of 11 Saskatchewan businesses to receive a federal grant under the Women Entrepreneurship Strategy (WES) program. The grant program received 3,000 applications from across the country.

About $2 billion has been pledged through the WES program to attempt to meet the federal government’s goal to double the number of female-owned or female-led businesses in Canada by 2025.

“It’s going to be useful in helping us introduce a new product, one that we wouldn’t have been able to do without the assistance — at least, not this soon,” said Milburn, who operates the business with her mother, step-father and husband.

The goal is to develop a sparkling mead along the lines of a bubbly champagne. Milburn explained that this new type of mead requires a different type of tank in which to make it. Such a tank will allow them to carbonate the wine and give it its bubbly texture.

The hope is to have this new sparkling mead available by Christmas so people can enjoy it on New Year’s Eve or for weddings in 2020.

Milburn heard about the grant during a Saskatoon-hosted business teleconference. She looked over the grant parameters and realized her company had a suitable project but no capital to pursue it. She applied for the grant funding at the last minute and submitted her application just under the wire.

One of the goals of the program, she continued, is to encourage female business owners to take advantage of recent free trade deals signed with other countries. Milburn’s company recently received an inquiry about selling the mead overseas. It did not have the equipment to meet that demand — until now.

Selling internationally is not something Prairie Bee Meadery has done before, so it will be interesting and exciting to figure out, Milburn said. She has been in contact with the Saskatchewan Trade and Export Partnership (STEP) about finding buyers overseas for her products.

Milburn thinks “it’s a really nice step in the right direction” that the federal government is directing funding to women entrepreneurs. She pointed out that during the announcement, statistics were presented about how far behind women-led businesses are in accessing capital investment funding and bank loans.

Prairie Bee Meadery opened in 2016 and things have been going well since then, Milburn added. The Saskatchewan Liquor and Gaming Authority (SLGA) has been a great partner and has provided good advice, while the business has also taken advantage of the “shop local” trend by tapping into residents’ desires to purchase goods in Moose Jaw.