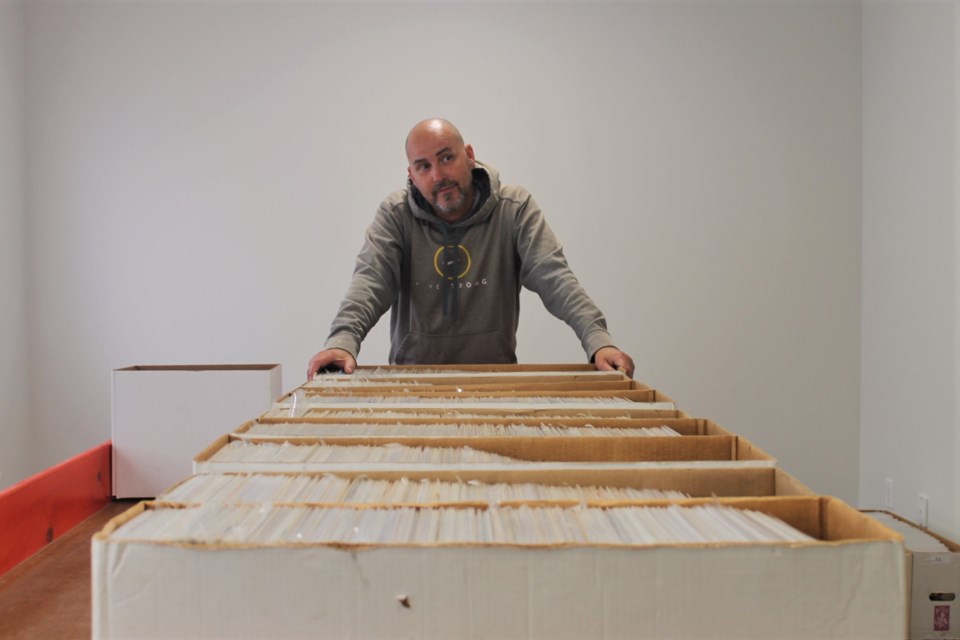 Long-time comic book collector Rob Hoskins is opening a store in Moose Jaw dedicated to all things “nerdy” and nostalgic.

Rob Hoskins has been a comic book guy since he was a kid, but now he’s about to become The Comic Book Guy here in Moose Jaw once his new comics and pop culture store opens next month.

The Comic Book Guy Pop Culture Shop, opening on Oct.1 at 264 River St. West, is a new passion project for Hoskins who has been a fan of comics for years.

“I grew up with comics, Spider-Man was my favourite,” admitted Hoskins. “I’ve been collecting stuff since then, and I actually have comics that I have had when I was a kid, from the sixties.”

His vision for the new shop is to be a place full of back issues of comic books, pop culture collectibles, and other toys.

“It will mostly be a comic book store, but we’ll also carry some pop culture items and things people loved when they were little,” said Hoskins. “I’m hoping it eventually becomes a place where people can come see what they can find and remember their past, what they loved as kids.”

Hoskins previously owned and operated a comic shop about a decade ago, which he closed after choosing to pursue a full-time career in photography. After moving online to continue buying and selling within his own personal collection — which he estimates has around 7,000 issues in it — Hoskins decided to get out of his garage and back into a brick-and-mortar storefront as a side business.

“This is like storage, with a bonus,” he joked. “But really, I think more than anything, it will be a place where we can get a few people in the shop, to talk about and share their favourites and that kind of stuff.”

Hoskins’ collection will be supplying the stock for his shop’s grand opening — and it's a collection that’s been in the works for a while.

The element of nostalgia is what Hoskins loves about comic book hunting, and it's what he hopes to bring out in people when they visit the new shop and browse through its collection.

“A lot of the shops [in bigger cities] have lots of really new stuff, but I want to focus on the past, on old comics and on stuff people had as kids,” said Hoskins. “That’s the most fun part, for me, is if I pick up an old comic that I read or I remember playing with this toy when I was a kid, and I want people to experience that too.”

Even once his doors are open, Hoskins will continually be on the prowl for new and interesting items. The shop will be set up for buying, selling and trading with customers and Hoskins will also be willing to help track down requests from customers if he can.

“The most fun part is flea markets and garage sales, or even you advertise you’re buying and people bring a box of cool stuff over,” said Hoskins. “It’s like a treasure hunt, looking for things I can put on my shelves.”

Hoskins’ shop will be the only comic book store in Moose Jaw, and he’s excited for people to stop by and share their excitement about the world of comics and toys.

Things are still coming together inside the shop, located at 264 River Street West in a lofty upstairs unit, but Hoskins is envisioning a room full of comics, framed issues and posters everywhere, and even a countertop plastered with old comic book covers.

He’s even paired up with Moose Jaw Families for Change to help with a project: covering a feature wall in the shop with a collage of clipped-out panels from old comic books.

And if after all that, there’s still room for a display shelf to show off his own personal collection of Spider-Man issues, then Hoskins will be even happier.

But ultimately, comics are something easy for kids and adults alike to enjoy, said Hoskins, and he’s hoping to keep the spark of excitement alive by bringing people together at his shop.

He’s already got lots of ideas for the future, if everything goes well — including potentially finding a distributor to supply newer issues of comics, adding gaming items to his inventory and even hosting game events and tournaments for the community.

For now, fellow comic book enthusiasts can keep an eye on The Comic Book Guy while he sets up shop by checking out the Facebook page.

The grand opening of the Comic Book Guy Pop Culture Shop, located at 264 River St. West, will be on Oct. 1, with MJFFC hosting a barbeque fundraiser outside, and Hoskins promises there will be some familiar costumed favourites making an appearance later in the afternoon.