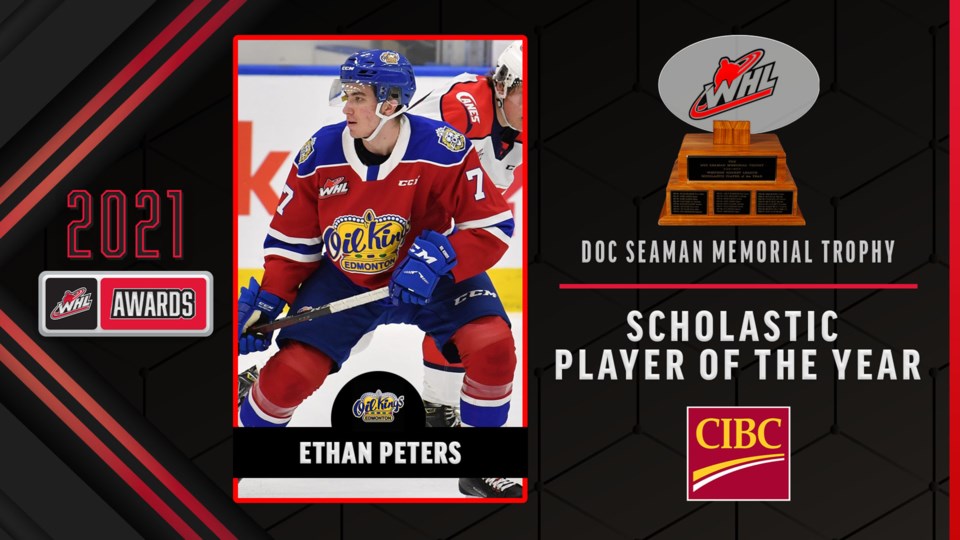 Moose Jaw’s Ethan Peters was announced as the Western Hockey League Scholastic Player of the Year on Tuesday. WHL.com
When the new year began, Moose Jaw Minor Hockey product Ethan Peters appeared to have seen his season come to an end.

The Saskatchewan Male AAA Hockey League had shut down due to the pandemic, he was unsigned by the team that held his Western Hockey League rights and like so many players his age, the 18-year-old defenceman was essentially in limbo.

Fast forward five months, and Peters is now a top-four rearguard with the WHL’s Edmonton Oil Kings, ranked by Central Scouting for the 2021 National Hockey League entry draft and, on Tuesday, picked up the biggest honour of his hockey career.

Peters was named the winner of the Daryl K. (Doc) Seaman Memorial Trophy as the WHL’s Scholastic Player of the Year after picking up the Oil Kings team and Central Division awards earlier this year.

“It’s a really special achievement and it was a pretty exciting day for me and my family,” said Peters, who received the call letting him know of the award on Monday. “A lot of great people have won it over the years and just to join that company I’m pretty humbled and honoured.

I’m really blessed to have a chance to receive it this year and it’s a testament to the fantastic people I’ve had the pleasure of working with over the last couple years.”

Peters took courses both at Moose Jaw’s Vanier Collegiate and through the Regina Catholic Learning Online Program through a partnership between the two school divisions. He achieved a core average of 94.67 per cent in his completed Grade 12 courses, including a 98 per cent grade in Math 30 Pre Calculus and 97 per cent in English 30 B.

“It is truly remarkable for a student to achieve such high grades this year with no in-class instruction,” said Sharon Sereda, Education Advisor for the Oil Kings, in announcing the award. “The discipline and motivation he has exhibited is outstanding.”

Peters pointed to Sereda as one of the major reasons he was able to perform so well academically.

“Sharon has been unbelievable helping me out along the way,” Peters said. “Just balancing hockey and school is definitely challenging, but you get that great support from our teachers at Vanier and with the Oil Kings. Being with that fantastic high-class organization, it makes a big difference for us.”

The award was the latest step in what has been an incredible six months for a player who wasn’t even sure if he’d play again this season when the calendar turned over.

“It’s been a pretty big rollercoaster these last six months since January,” Peters said. “The first couple games, it was just getting into the league and adjusting to the pace and the play, but I thought things just kept getting better as the season went on.

“I was really fortunate to be on a successful team with a lot of veteran guys who helped out us younger guys and helped show us the way, so that made the adjustment a lot easier and we had a pretty successful year to be proud of.”

Peters would play all 23 games for Edmonton, scoring the first goal of his career against the Red Deer Rebels on April 2 and finishing the season with a goal and five points.

His steady play eventually landed him a spot in the top four defensive pairings alongside overage rearguard Ethan Cap, and with Edmonton on its way to a league-best 20-2-0-1 record, scouts began to take notice.

And when the final Central Scouting Bureau rankings came out prior to July’s 2021 NHL Entry Draft, there was Peters ranked at 198th among North American skaters.

From playing for the Moose Jaw AAA Warriors in November to a potential NHL Draft pick in only five months… a rollercoaster indeed.

“To be ranked on that Central Scouting list was a pretty big honour and an exciting day, but I was just humbled being on the list,” Peters said. “Being with a first-class organization with great coaches and teammates helped a lot, now I’m just taking it one day at a time and I’m excited to see what happens in the years to come.”