It is official…Mac the Moose is on a journey to reclaim its title as the “World’s Tallest Moose.” The news was made at an official press conference on Monday, January 21 at the Tourism Centre. An official statement was made on behalf of Mac the Moose, read by Mayor Fraser Tolmie.

Mac the Moose, with support from Tourism Moose Jaw and the City of Moose Jaw, has decided that it wants to restore its pride and national dignity by reclaiming its title from rivals Norway, who took the title four years ago.

In the statement, Mac the Moose said, “The world needs to know – I am not ashamed of my size, nor should anyone else be. But this is not a size issue – it’s a pride issue.”

“I bear no grudge against my shiny, cloven hoof counterpart Storelglen. But much like my natural enemy the bear, his Norwegian creators stalked me with predatory purpose, horning in on my territory. So, I Mac the Moose, hereby give permission for my Tourism Moose Jaw caretakers to take me to new, record-breaking heights… one way or another I will soon reclaim my status as the “World’s Tallest Moose,” the statement said. 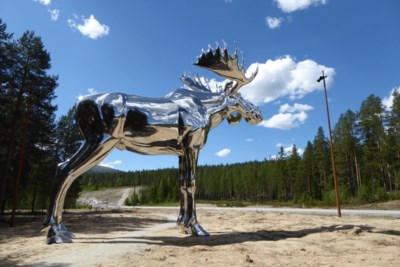 Norway's Storelgen has stolen the title of 'World's Tallest Moose.'

Speaking with the media, Mayor Fraser Tolmie said the city will rally together to make Mac the “World’s Tallest Moose” once more.

“This is a happy day for the City of Moose Jaw. It is the start of something new. Obviously, we have a challenge in front of us and that is to restore Mac’s pride — the City of Moose Jaw’s, Saskatchewan’s and the nation of Canada’s pride. There’s going to be a lot of hard work in front of us to get Mac back as the world’s tallest moose, but we’ve got a community and a province that is willing to do that so, we’re very encouraged and grateful to all those who are supporting us.”

Tolmie said Mac the Moose is a national treasure that needs to reclaim its rightful status.

“Mac is a national treasure — we’re humble people but the challenge was laid down with us by the people of Norway and they purposefully built their moose to be bigger than ours and we’re answering the call,” he said. “I don’t see the connection between moose and Norway…but there’s a connection between moose and Canada and I think the rightful crown belongs in the City of Moose Jaw. We’re a polite people but there are things you just don’t do to Canadians,” Tolmie says of the friendly row with Norway. “So, we’re answering the call and we know there has been global support for this and we’re happy about the publicity we’re getting.”

Tolmie also addressed some public concerns that were raised as the friendly rivalry continues to gain momentum.

“There are no tax dollars going towards this. There is a GoFundMe page and there have been numerous businesses that are stepping up to the plate and we’re grateful to our community for that. The issue regarding tax dollars is a rumour,” he said. “This is not a petty thing…it’s a pride thing and we’re reclaiming our national pride.”

A word to Norway

“We’ve had some communication with Norway. They said that they would also answer the challenge but my words to the people of Norway is, we have the resources and we will bring it,” added Tolmie.

“We are willing to do whatever it takes to put our Mac back on top! We will start with some structural investigation. So, if any engineers would like to help us, please let me know,” she said. “This is more than just a good-natured competition to us. This puts our Mac in the spotlight, putting Moose Jaw on the radar of millions of potential visitors to our wonderful city. Our organization in a non-profit, and we know that this community will support us in this endeavour. The requests for involvement have been more than we could imagine. We thank everyone for their offers of help.”

The friendly rivalry started two weeks ago when social media lit up with excitement after popular social media personalities Justin and Greg pointed out that Moose Jaw has been dethroned from the title which it held for 31 years, until 2015.

The title for the ‘World’s Tallest Moose’ went to rivals Norway, after the country built a Storelgen, meaning “the Big Elk,” that stands just over 32 feet tall (10 meters). According to their website, Norway boasted that their moose, “beats out its fiberglass Canadian rival 'Mac the Moose' in Moose Jaw by about 12 inches (30 centimetres).” The moose statue towers above the highway between Oslo and Trondheim in Norway.

Since then, Moose Jaw has been in the global spotlight as some dubbed the competition an “International Moose Beef” on some social media platforms and mainstream media.

To support the initiative to make Mac the Moose, the “World’s Tallest Moose” again, you can donate to the GoFundMe page which aims to raise $50,000.

Public health launching rapid testing pilot program to increase testing capacities
Dec 1, 2020 4:41 PM
Comments
We welcome your feedback and encourage you to share your thoughts. We ask that you be respectful of others and their points of view, refrain from personal attacks and stay on topic. To learn about our commenting policies and how we moderate, please read our Community Guidelines.