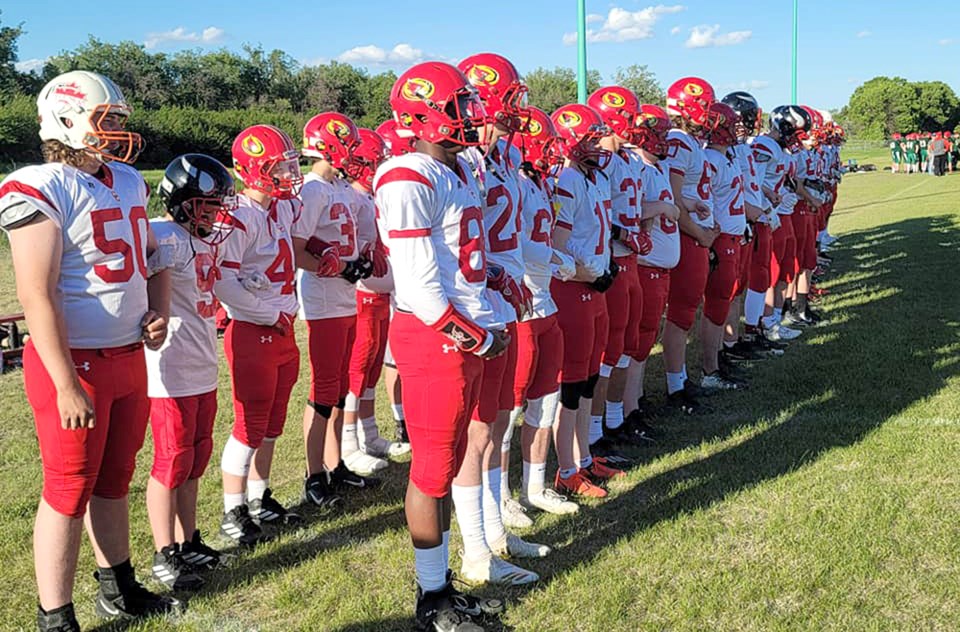 And the Moose Jaw Marauders couldn’t have asked for a better start.

The Marauders — the local entry in the one-off league designed to give high school players some semblance of a season during the pandemic era — put together a second-half surge and rolled to a 42-7 victory in Weyburn on Wednesday night.

“It was all just awesome, win or lose,” said Kinsmen Moose Jaw Minor Football president Bryan Boys, one of the architects behind the Spring League. “You could see the excitement in their faces, there were so many happy kids who were just excited to be back out playing football and it was just great to see.”

It wasn't perfect for the Marauders right off the hop, however. The team — which features players from Central, Peacock, Vanier and Cornerstone — found themselves tied 7-7 at the half before starting to connect after the break.

“For our first game in a year and a half, I thought the kids played really well once they got their nerves out,” Boys said. “Weyburn played us real tough, they had a lot of their players going both ways and we were able to wear them down as the game went on. They’d already played a game, too, so they had some experience under their belt where we had to get some kinks out.”

Boys pointed to a handful of touchdown catches by Dylan Boughen and a solid game on the ground from Ryan Vincent as two of their offensive keys, while Devin Baumann and Kael Nichols helped provide a shutdown defensive performance, as Weyburn’s only touchdown came on an offensive turnover.

Seeing the team come together so quickly despite featuring such a conglomerate of players from different schools was another positive in Boys’ eyes.

“It’s really cool, you see all the different team helmets out there, but there was still that team atmosphere,” he explained. “It wasn’t just each school, it was the Moose Jaw Marauders and they were all about it. They all came together over the last two weeks and it was just amazing how well they played right off the start.”

That also extends to their coaching staff. Central Cyclones bench boss Colin Belsher is working as the team’s head coach, but assistants from all over the city are also lending a hand.

The Marauders are back on the field on Saturday, June 19 when they host Yorkton, with game time 6:30 p.m. at Gutheridge Field. Unfortunately, crowd capacity will be limited due to ongoing health restrictions.

A junior varsity team for Grade 9s and 10s has also been formed and will face Weyburn’s JV team on Wednesday, June 23.

The season will run through to Saturday, July 10, with the JV Jamboree at 3 p.m. and Varsity Championship Game at 6 p.m. at Gutheridge Field.