The Moose Jaw Plant Fairies have been spreading blossoms of joy by delivering plant-related gifts to total strangers through social media
May 31, 2021 5:00 PM By: Larissa Kurz

Even though many of them are total strangers, members of a local Facebook group in Moose Jaw are bonding over surprising each other with anonymous gifts of flowers and gardening accessories with only one intent: to spread some sunshine in people’s lives.

Tammy Kohl is the current organizer of the Moose Jaw Plant Fairies group, which is in its second year of operation as a completely community-based idea.

She took over from the group’s original organizer Jenny Chartier, who was one of a few architects who came up with the idea last year after the trend of “wine ninjas” really took off — where people would anonymously deliver care packages filled with alcohol and treats to friends, with the goal of not being seen.

“The general idea (of our group) is to choose an address you want to gift somebody, either a plant or a flower, and then put your name on the list so eventually someone else in the group will come and drop off a gift for you,” explained Kohl.

In the same type of spirit, this group decided to focus on blooms instead of booze, and the Moose Jaw Plant Fairies were born.

“It’s really just a way to share a flower or gift with a stranger,” said Kohl. “And it’s been really fun to see what people have been gifted.”

Deliveries have been really great so far, she continued, with group members getting really creative about their gifts.

Plants of all types have been exchanged so far, from blooming flower arrangements to personally propagated house plants, as well as gifts like gardening care packages and even a hanging planter made from a bra.

“We’ve seen beautiful perennials, baskets of flowers, gardening tools or ornaments for the garden, and a lot of them have been putting nice notes in with their gifts too, to cheer (the recipient) up,” said Kohl.

Some fairies are even dressing up to keep the mystery alive, donning wings or stepping into inflatable dinosaur costumes for an extra twist of fun. 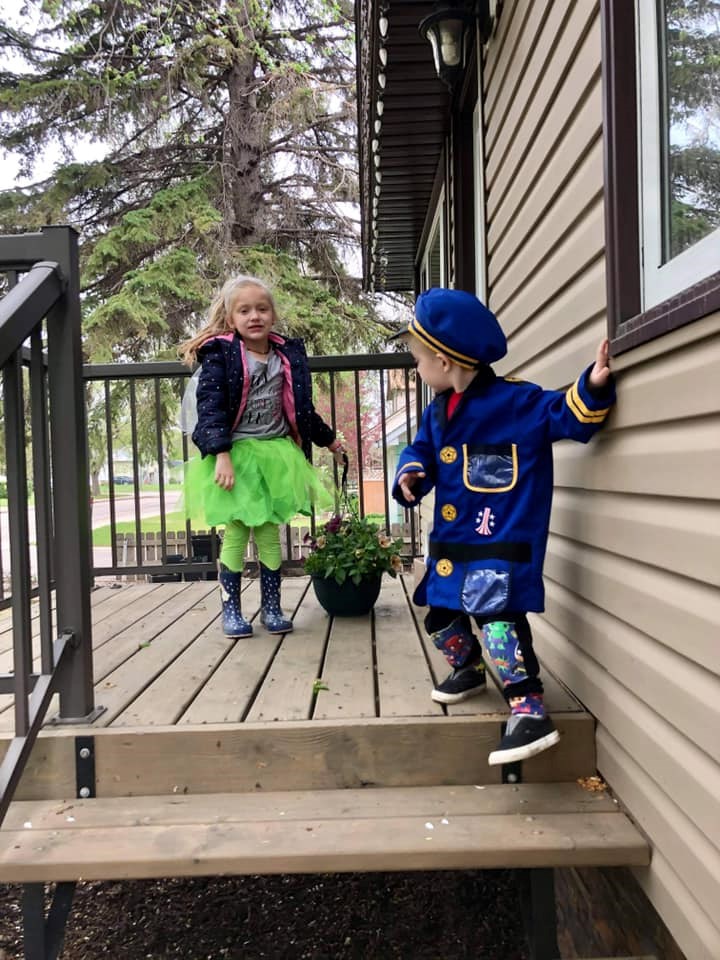 Some fairies are even dressing the part to deliver their gifts, like these two helpers. . By (supplied)
Kohl said that she had over 200 addresses sign up this year, and more than 400 members in the social media group, with everyone sharing positivity with every doorstep drop.

Some members even decided to only give gifts, said Kohl, and delivered to several addresses without asking to receive anything on their own porch.

The group exists almost completely on social media, but it’s still fostered a sense of community, said Kohl. In addition to its goal of spreading some joy, she thinks the Moose Jaw Plant Fairies has helped the local members connect with each other over something entirely wholesome.

“It’s been so great, to connect with these other women as they message and send their addresses and make their deliveries,” said Kohl. “We all share words of encouragement back and forth and that’s been really rewarding.”

She also feels it’s a good representation of how people are coping with the ongoing limitations the pandemic has put on everyone.

“I think that people are more focused on trying to help others [right now], and so I think a lot of people are looking for ways to put a smile on somebody’s face,” said Kohl. “And this is a really easy way to do that.”

She asks every recipient to send her a photo of their gift that she shares in the Facebook group, no names attached, and they almost always come with an uplifting thank you message.

“For a lot of (members), their favourite part is seeing what other people are getting, the different kinds of flowers,” said Kohl. “And then people get to see the reaction to what they’ve gifted too, which I know they’re liking as well.”

Although the group isn’t taking any more addresses for this year, Kohl said she feels confident there will be plenty of interest in continuing this new tradition in the future.

Would you dare visit the fourth-most haunted place in Saskatchewan?
Oct 26, 2021 4:00 PM
Comments