Montmartre family featured on a documentary series that focuses on life on family farms ahead of Canada’s Agriculture Day on Feb. 12
Feb 11, 2019 10:36 AM By: Matthew Gourlie 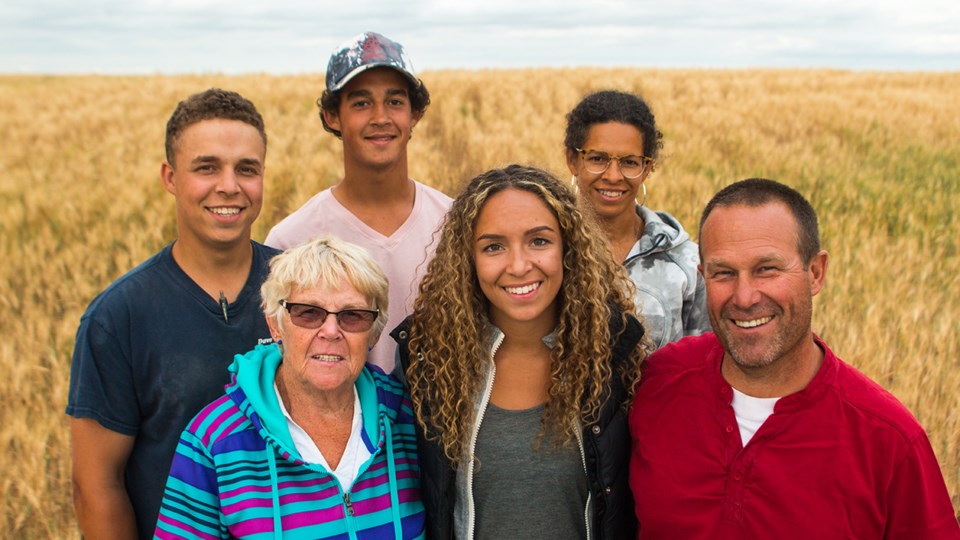 Saskatchewan has always been inextricably tied to the agriculture industry.

However, increasingly, the public is getting further distanced from what the agriculture industry does and what life on the farm is about.

The Canadian Centre for Food Integrity found that 93 per cent of Canadians surveyed said that they know little-to-nothing about farming.

Canada’s Agriculture Day on Feb. 12 is a chance for the ag industry to showcase the role farmers play in Canadian lives and the economy. To help share farmers' stories, a documentary web series called Real Farm Lives was filmed to give a glimpse into the daily lives of farm families in Ontario and Saskatchewan.

"It was pretty neat. It was interesting and now I don't regret it," said Norm Englot, whose family farms just outside of Montmartre, and was the Saskatchewan family featured in the series. "It was in my busy season a bit and I was sceptical. You always are off the start. Now we've made some really good friends out of it too."

The 52-year-old moved to their family's 'Costa Lotta Farms' when he was six and has lived there the rest of his life. He and his wife Loretta raised three kids on the farm: DJ, 22; Madison, 21 and Luc 19. Norm's mother Norma is also featured in the series.

One of the focuses on the series is to dispel some myths about farming.

"The biggest thing is probably GMO and the use of chemicals," Englot said when asked about which misconception is most prevalent about farming. "We believe in keeping ourselves safe in what we do and so I think we're producing safe product. I would eat everything I grow on my farm, I'd have no trouble. That's what it boils down to I think."

Health Canada has a division called the Pest Management Regulatory Agency that regulates every pesticide in Canada.

One of the myths that the series tried to dispel is that there is an 'off-season' for farming. Even on a bitterly cold February day, Englot was still busy.

"I am loading semis today, so I am loading out grain. You pray that nothing goes wrong. You want the truck in and out of your yard as quick as you can and you don't want to fix in the cold," Englot said.

The Englots used to have cattle, but now Englot spends some of the winter in his heated shop repairing equipment. He also spends a lot of time learning about advancements in the industry.

"We might get away for a week to some place warm -- like everybody else in the world -- but we don't just take off an abandon everything," Englot said.  "You can market or you can take in some trade shows and learn. There's always something to learn."

As the margins between making and losing money continue to narrow in the agriculture industry, Englot says you can't rest too much on your laurels.

"It's very tight, that's why you have to keep learning. It is too bad that the margins are so tight for us, but with technology and other companies investing in technology -- whether its seed or machinery -- they are definitely helping us improve our bottom line in tight margins," he said.

Englot's father passed away a decade ago, but he was around for the advancement of autosteer on tractors, which was a game-changer.

"With GPS, we're still manning the tractors and we're sitting in them for countless hours and look around and watch your machines work and you don't have to steer, which is huge. At harvest time, with the dust conditions, you're very efficient. You're not worried about overlap or missing," Englot said. "That was probably the biggest thing, but now we're seeing the investment in seed. There's better seed. There's resistance to clubroot. There's all kinds of stuff that is really helping us too. Obviously, the yields have been improving and improving too."

Clubroot is a serious infectious disease that can significantly reduce crop quality and yield, and recently the provincial government confirmed clubroot was found in 43 commercial canola fields. Englot is currently studying the disease, attending seminars and looking for canola seeds with resistance in the hope that it will not spread to his farm.

Last year the Englots farmed 3,000 acres of canola, soybeans and durum wheat. Englot hasn't changed too far from the tried and true rotation that has worked for him over the years.

"I have a rotation that I stick with. I've probably been cheating on the canola a little bit too much like everyone else in the country," Englot said. "We keep it simple. Everything is straight combine. It makes for a lot less work for me at harvest time."

One in eight Canadian jobs are in the agriculture and agri-food industry.

Norm doesn't see himself changing his lifestyle, but he also isn't sure how many more years he has in running the farm. He said it's possible any of his children may want to take it over some day.

Daughter Madison is graduating from the University of Saskatchewan with an Agronomy degree and a job waiting for her at a chemical company. DJ runs the tire shop in town, but is still involved in the farm and Norm helps his son in the shop with some labour when he can. Luc is studying agriculture in university as well.

Englot started farming when he was 18 and said it's been a great way of life.

"I love what I'm doing. I'm my own boss," he said. "Right now I have a snowmobile sitting out front of the house, it's a little cold, but I'm going to go for a 10-mile round around some fields. I'll see what's out there for nature."

To celebrate Canada’s Agriculture Day on Tuesday, the Agriculture Knowledge Centre in Moose Jaw (45 Thatcher Dr. E) is hosting an open house from 10 a.m. to noon. Also, the film Before the Plate will be screened at the Moose Jaw Public Library at 1 p.m.

Life’s difficulties couldn’t stop CFLer LaRose from succeeding
Nov 30, 2020 10:00 AM
Comments
We welcome your feedback and encourage you to share your thoughts. We ask that you be respectful of others and their points of view, refrain from personal attacks and stay on topic. To learn about our commenting policies and how we moderate, please read our Community Guidelines.