The Moose Jaw Police Service wrapped up their Community Police Academy with a detailed look at what it takes to get into police work
Dec 3, 2019 12:00 PM By: Larissa Kurz 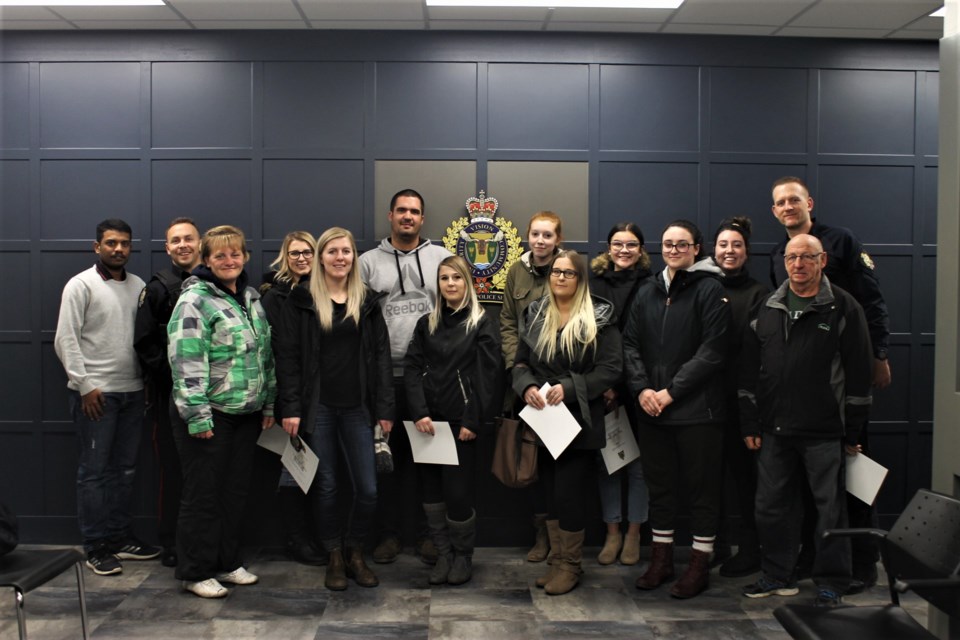 There are a number of ways to get involved with the field of policing, and Cst. Kyle Cunningham and Cst. Rod Zoerb shared what exactly the Moose Jaw Police Service look for when hiring new recruits.

The MJPS currently has 57 members, each of whom went through the same application and interview process — beginning with a lengthy application that includes a resume, educational transcripts, personal history, criminal record check, an ethics and integrity exam, and a long list of personal references.

Potential MJPS recruits also undergo a vision and hearing test, as well as a polygraph test — which, if failed, can seriously impede chances of being hired at any police service elsewhere.

Completed CPR and first aid certificates are a requirement, and all recruits must pass the Peace Officers Physical Abilities Test (POPAT) upon hiring.

The hiring process takes an extremely thorough and detailed look into a person’s past, and the qualities that the MJPS looks for currently may be slightly different than those on the list a decade ago.

Maturity and life experience are extremely important, with the service rarely hiring anyone younger than 22, and physicality doesn’t necessarily outrank the ability for quick critical thinking. Gender is also not a factor, although female applicants are often eliminated during the POPAT.

For the most part, the MJPS looks for someone who can answer the question of “why pursue a career in policing?”

“It's different for each person,” said Cunningham. “[And] if that one stumps you, the interview's over, because if that's not on the tip of your tongue as to why you want to do this, then maybe you're not quite ready.”

Potential constables must be adaptable and able to handle the many responsibilities of an officer, as well as be able to work as a team in a high-stress environment and still display good ethics and risk management.

“There's no individual glory or reward that you're looking for in this job and if you are, you're doing it for the wrong reasons,” said Zoerb.

Becoming a constable with the MJPS isn’t the only route into police work. Positions with the RCMP, the Canadian National Police Service, or the military offer similar opportunities, as does becoming a conservation officer, a corrections officer, or a security guard.

There are also a number of civilian positions within the police service, including dispatch, administration, Victim Services, the information management unit, speed enforcement, and more.

Policing as a field is in flux

Chief Rick Bourassa has expressed interest in hiring two more officers for the MJPS in 2020, due to an increase in calls over the past few years.

Although the MJPS has 57 members employed, Cunningham and Zoerb pointed out that rarely are all of those members available for duty — there are always officers sick, injured, or on various types of short-term and long-term leave.

Based on its size, Moose Jaw should have at least 70 officers and an increase in civilian positions to efficiently provide service to the city, especially as the job continues to evolve.

Two new officers could help alleviate some of the overtime work MJPS members are currently doing, as could the development of a second PACT team to respond to calls dealing with mental health and addictions.

Experiencing hands-on helps to understand the nature of policing

Police work is a unique career, and anyone considering applying for the career path has a lot to consider.

“People don't realize how rewarding our job can be, how satisfying it can be, but also how stressful it can be. It kind of pulls you in two completely different directions lots of days,” said Zoerb. “It's very polarizing and unique. There's no job like this, no matter what you're doing, it's not like police work."

The Community Police Academy is one way that curious civilians can learn more about what MJPS officers experience on the job every day, and one of this year’s attendees certainly felt like it was an eye-opening six weeks.

“I feel like people misunderstand what police officers do. . . They're here to work for you and protect you. You know how it is in the media, 'one bad cop' gets twisted into 'everyone's a bad cop,’” said Hana Giddings. “It is kind of just nice to see them as people rather than this figure that can't be touched, that you can't relate to.”

Giddings heard about the program through a personal connection, and as a student who has studied the legal side of the justice system, she felt that seeing this side of the process was informative.

“You don't learn it from a police officer [in the classroom], it's a professor, so this is kind of more like their real stories, their real experiences,” said Giddings.

Although Giddings enjoyed the program, she wasn’t quite swayed to policing as a career, but she did recommend the Community Police Academy to future attendees.

“It was really cool,” said Giddings. “It's only six weeks and it's a different thing every time: you get to shoot a gun, get to meet all the police dogs, get to go on a ride-along, so like those three things alone are [worth it].”

Details for this article were collected as part of the Moose Jaw Express’s attendance at the Community Police Academy.