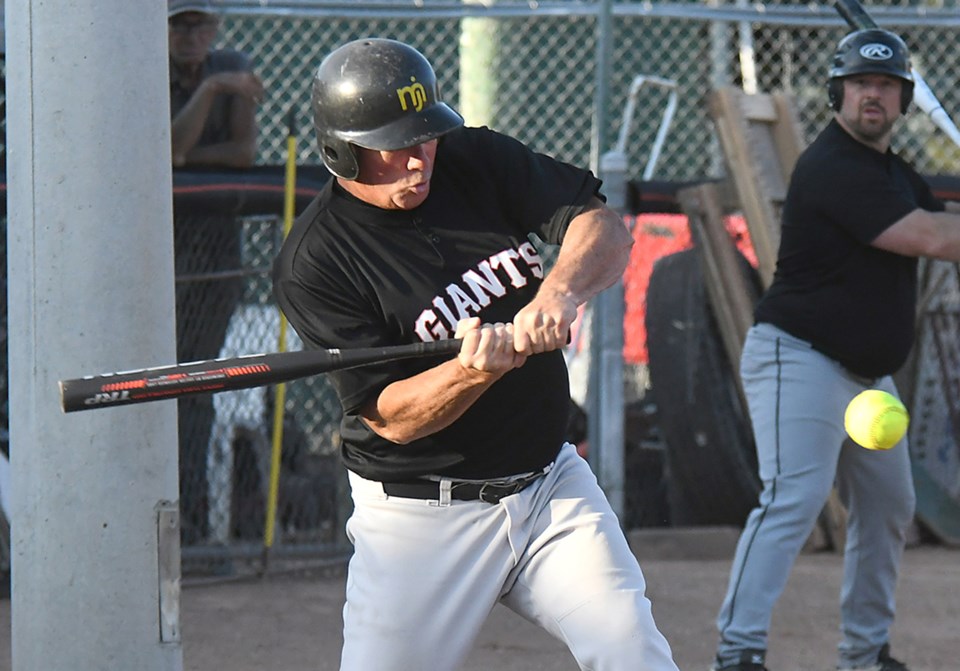 Darryl Callaghan hit a solo home run in the Giants' win over the Gold. | File photo
It could have been the kind of result the Park Hotel Giants put together back in their run of five-straight Memorial Field Fastball League championships in the mid-90s -- right down to the key players in the game.

Darryl Callaghan and Todd Whitehead each hit solo home runs and Dale Garthus tossed a three-hitter as the Giants took a 7-0 win over the Regina Gold in Rambler Park Fastball League action at Lyle Helland Ball Diamond on Tuesday night.

In the nightcap, the Earl Grey Rockets hit five home runs on their way to a 9-1 victory over the Canadians.

The Giants improved to 6-2-2 on the season and hold down second place in the six-team league, while the Canadians are now 5-4-1 and sit fourth.

The Canadians are back in action Friday when they take on the Little Black Bear Blues, while the Giants face the Blues on July 28. Both games are in Regina.

Garthus turned back the clock with his performance in the circle, as he didn’t allow a runner into scoring position until the fourth inning and even then would get a double play to escape the danger. He’d tack on four strikeouts in securing the shut-out win.

His teammates, meanwhile, gave him all the run support he’d need right off the hop, batting through the order and putting up four runs in the first inning. The Giants tacked on another in the fourth before Callaghan and Whitehead hit back-to-back solo home runs in the fifth to invoke the mercy rule.

Both veteran players finished the game with two runs scored, while Braden Konschuk also had a double and crossed the plate twice.

Rhett Sandercock, Brandon Bailey, Jordan Schultz and Dylan Fiessel all hit solo home runs for the Rockets before Justin Sievert capped off the round-tripper fest with a three-run shot in the seventh to close out scoring for Earl Grey.

Sievert also had a solid game in the circle, scattering four hits through the night. His only mistake came in the bottom of the fourth when Brad Reaney hit a solo home run of his own.

Reaney also drew a fifth-inning walk and along with Joel Jordison -- who walked twice -- were the only Canadians to reach base more than once.