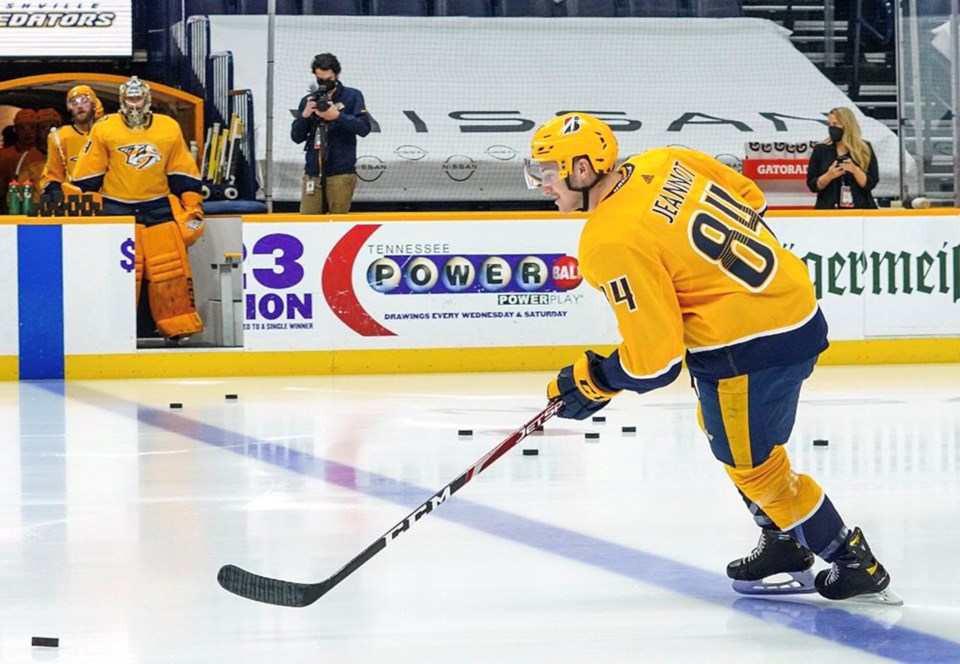 As it turns out, sometimes good, old-fashioned hard work does pay off.

And when it comes to putting in the effort both on and off the ice, you won’t find someone more dedicated than former Moose Jaw Warriors forward Tanner Jeannot.

That’s why the Nashville Predators signed him as a free agent after his 20-year-old season.

And that’s why the 23-year-old Oxbow product made his National Hockey League debut with the Predators on Tuesday night.

After receiving the traditional ‘rookie treatment’ and taking a few laps by himself during warm-up, Jeannot took the ice on the left wing alongside Colton Sissons and Mathieu Olivier.

All told, Jeannot would receive 6:28 in ice time and would block his first shot in the NHL.

“It’s been awesome, I’m sure everyone that gets the opportunity to play their first game in the NHL would say the same thing. It’s something you work for your whole life,” Jeannot said on NHL.com on Wednesday afternoon. “I can’t thank the people who helped get me here enough, my family drove me to the rink all those early mornings, coaches, friends, teammates, everybody is sharing in it with me and I’ve got lots of messages from people back home and all around, so it’s been really amazing.”

Tanner Jeannot looks back on his NHL debut and shares how his season has gone with the Chicago Wolves in the AHL. @Bridgestone | #Preds pic.twitter.com/ZS7GwoH4ag

Jeannot emerged as one of the Warriors’ heart-and-soul players through his four years with the WHL squad, and his hard-working style paid off in his overage season as Jeannot scored 40 goals and 80 points while taking the ice in all 72 games. He’d emerge as a critical piece of the team’s success as Warriors would go on to win the Scotty Munro Trophy with the best regular-season record in the WHL.

Jeannot signed with the Preds after that season and has spent most of the last two campaigns with the Milwaukee Admirals of the AHL, where he had 12 goals and 31 points in 92 games.

Jeannot started the 2020-21 campaign in style, though — first taking the ice with the Florida Everblades in the ECHL, where he had three goals and six points in five games. As soon as the American Hockey League opened their season, Jeannot was in the Chicago Wolves line-up and serving as an assistant captain. He’d scored three goals and eight points in six games before being called up to the Predators taxi squad on Feb. 26.