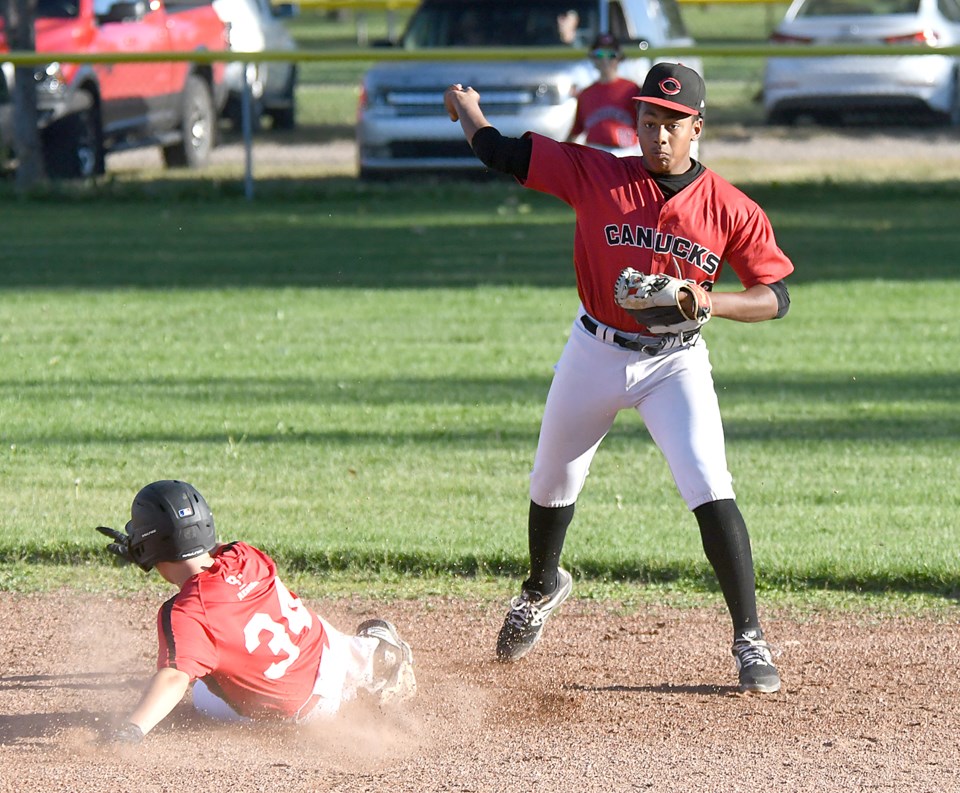 Canucks second baseman Javin Boynton turns a double play during action last season.
Anyone who followed the Moose Jaw Major All-Stars in their run to the Canadian Little League national championship tournament two summers ago will be very familiar with the majority of the Moose Jaw 15-and-under AAA Canucks.

A total of seven players from that crew took the field for their first contest of the Baseball Regina season on Monday night, and while the result wasn’t as lopsided as what the All-Stars put together in their run through Little League regionals in 2019, it was a win nonetheless.

Javin Boynton hit a three-run home run in the second inning as the Canucks roared out to an early 8-4 lead and never looked back on their way to an 11-10 victory over the Swift Current 57’s at Swarbrick Diamond.

“It was a pretty good start for sure and it was nice to get the win,” said Canucks head coach Daryl Pisio, who was also an assistant with the All-Stars back in the day. “The boys have been practicing a lot over the last several weeks and some of it showed just in regards to the lots of hits yesterday and some good plays in the field, and the pitching was good as well.

I think there was some nerves for the kids heading into the game yesterday, but after the first inning for each of them, they settled down nicely and were able to be successful. So it was nice.”

One thing that’s for certain is the Canucks will be more than familiar with one another -- the majority of the team has played together much of their young careers, creating a sense of team unity that Pisio hopes will lead to a solid season as things progress.

“So they’re meshing together well, so far so good, but there’s still lots of room for improvement,” he said. “We have to tighten some things up with errors and our timing was off a little bit with hitting, so I think we can hit the ball even better. But it’s the start of the season and we’ll take the win and get ready for what will be a tough weekend, for sure.”

Max Simmons finished the game 2-for-3 with two runs scored and an RBI, while Nathan Pisio was 2-for-3 with a run and two RBI. Owen Varjassy and Gerritt Gulutzan also had two hits apiece.

Owen Csada got the start on the mound and allowed three earned runs on four hits through three innings of work, Rylan Caplette-Tarrant surrendered four hits on five runs in two innnigs of relief and Boynton closed things out, giving up a run on two hits over the final two frames.

So far, so good, and ideally a sign of things to come not only this season, but well into the future.

“The idea is to create a four-year program (through 18U AAA) for them so they’re constantly improving and taking next steps to the next level, so eventually we end up with more kids from Moose Jaw playing with the Miller Express baseball team,” Pisio explained. “It’s small little steps every year to get to that level, so when the kids are in college or wherever they’re playing they’ll be able to come back home and play here in the summer.”

The Canucks have a busy weekend ahead of them, with a doubleheader on the road against the Alameda South East A’s on Saturday before hosting the Assiniboia Aces at Swarbrick on Sunday. Game time is 6 p.m.