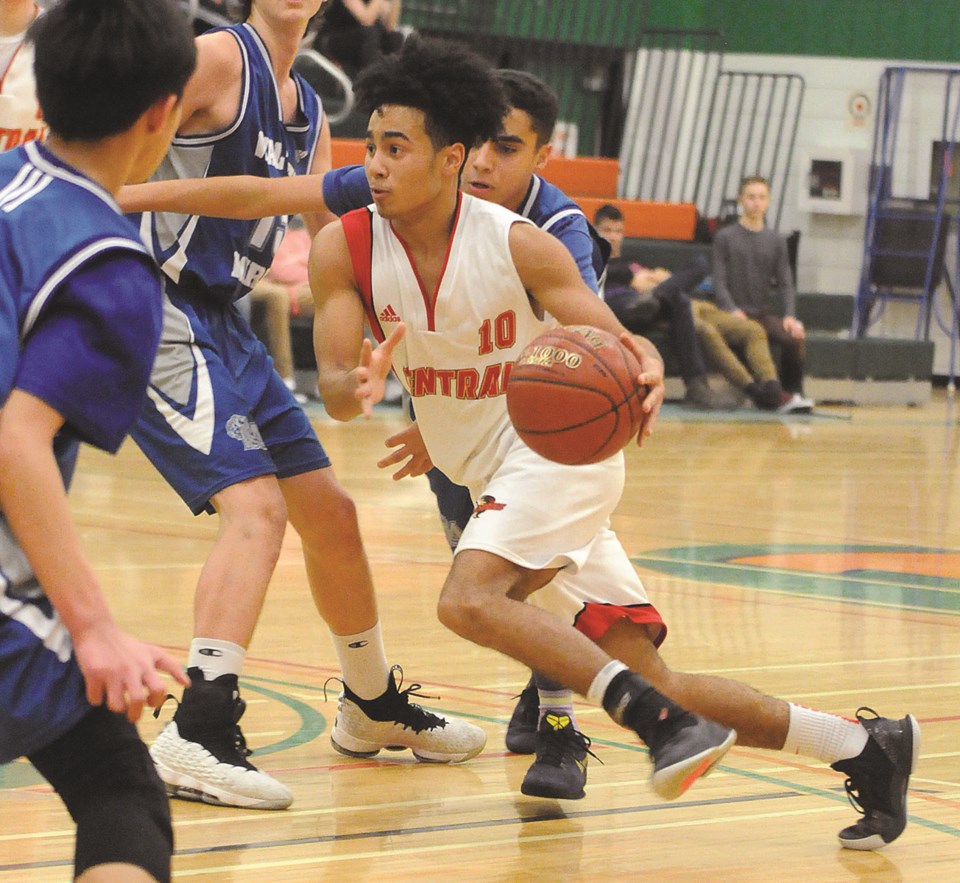 Quinton Ross and the Central Cyclones reached the bronze medal game in the highest division of the Bowlt Classic pre-season tournament.
If the Central Cyclones were looking for a test to start the defence of their provincial 4A boys basketball championship, they couldn’t have done much better than what they went through this past weekend.

The Cyclones posted a 2-2 record and lost in the bronze medal game at the Bowlt Classic pre-season tournament in Saskatoon over the weekend, which in and of itself is not a bad result.

But considering Central was playing in the Gold division and taking on some of the top 5A teams in the province in the process, the finish is actually rather exceptional.

Central won their opener 87-86 over Regina Campbell before dropping a 78-58 decision to eventual tournament champion Saskatoon St. Joseph and battling past Saskatoon Walter Murray 109-99 in overtime. That sent the Cyclones into the bronze medal game, where they’d fall 81-48 to Saskatoon Holy Cross.

“They’d beat Knoll the night before to become the second-best team in Regina, so we knew that was going to be a really good test,” said Cyclones head coach Ryan Boughen. “We only ended up winning by one but it was one of those things where they hit two or three threes in 30 seconds, so it was more like a 10-point game. But we managed to hang on and get through that one.”

The Guardians are one of the early favourites to win the Saskatoon league, and it showed on the court as the Cyclones struggled to keep pace with the veteran squad.

“They’re the top team in Saskatoon right now and it was a good game, they just played better than us and right now they’re just ahead of us,” coach Boughen said.

The Cyclones were able to put their offensive depth to good use, as three players cracked 20 points in the high-scoring contest – Boughen with 25, Jabeteh with 23 and Ross with 21. Amara Kamara came off the bench and scored 10 points.

“There were some really neat ebbs and flows, we were up by as much as 15 but we just couldn’t get over the hump and pull away,’ Boughen said. “But then in overtime we were able to keep it going and win by 10. That was a really exciting one, and a typical pre-season game where there were lots of turnovers and not real crisp play by either team.”

The bronze medal game offered a perfect example of one of the major differences between last year’s champions and this year’s younger squad.

After a first half where the Cyclones were able to keep touch with the Crusaders, a defensive switch after the break played havoc with the Central offence. By the time things were settled down, a six-point lead at half turned into a 20-point deficit.

“Last year, we had such an experienced team that you could tell them something or draw it up on a whiteboard and right away they’d be like ‘oh I remember that’,” Boughen said. “But this is a younger team, and they were like ‘what’s going on here,’ which is fair.

“Jonathan McLean is helping me coach this year and he had a great point where last year we could figure something out in a two or three time-outs over two or three minutes, this year we need 45 minutes of practice to sort it out. So that’s our reality right now. It’s just where we are, we’ll get there once we spend some time in practice.”

The Cyclones are right back on the court on Tuesday night as the Moose Jaw high school basketball league kicks off their new season. They’re at Vanier to take on the Vikings at 6:20 p.m., while Peacock hosts Assiniboia in the other boys contest at 6 p.m.