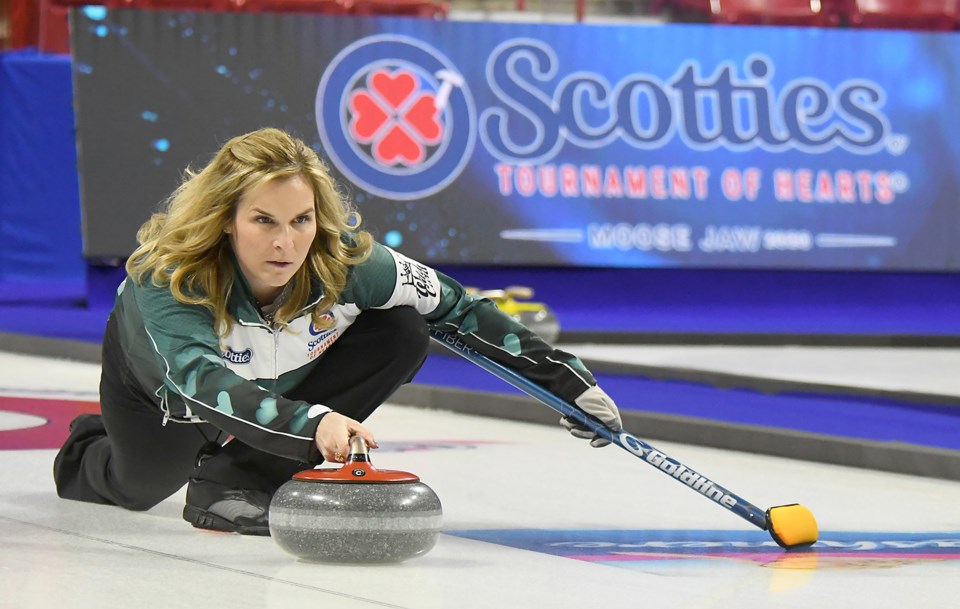 Jennifer Jones will once against represent Manitoba at the Scotties Tournament of Hearts after being selected for the spot due to the cancellation of provincials. | Randy Palmer
When the provincial governing body for curling in Saskatchewan announced in early December that the Viterra Scotties and SaskTel Tankard men’s and women’s qualifying tournaments in Estevan had been canceled, a lot of questions were raised.

And those questions remain, but for a very good reason.

Curl Sask continues to take a wait-and-see approach to naming their provincial representatives, holding out hope that some sort of qualifier event can be held to determine who will play for Saskatchewan at the national Scotties and Brier later this year in Calgary.

Both events are taking place in a quarantine bubble at the Markin McPhail Centre ice complex, with the Scotties running Feb. 20-28 and Brier from Mar. 6-14.

The 2020 Scotties Tournament of Hearts was held at Mosaic Place in Moose Jaw last February.

Alberta was the latest province to outright cancel their provincial championships, with that decision coming down on Friday. Their representatives will be determined in the near future following a decision by the Curling Alberta board of directors.

That decision followed similar moves earlier in the season from Northern Ontario, Ontario, Manitoba and B.C., all of which have opted to name their 2019-20 champions as their representatives for this year.

In Northern Ontario, that means Brad Jacobs and Krista McCarville would be their reps, but McCarville -- a teacher from Thunder Bay -- opted out due to COVID risks and her job. Runner-up Krysta Burns will replace McCarville.

Ontario will be represented by Rachel Homan and John Epping, Manitoba by Jennifer Jones and Jason Gunnlaugson. Jones finished third as the Wild Card entry in the 2020 Scotties, with Manitoba champion Kerri Einarson winning the event and playing as Team Canada in 2021.

Corryn Brown and former Saskatchewan standout Steve Laycock will represent B.C. after their provincials were cancelled on Thursday.

Curl Sask, meanwhile, announced back in late December that discussions had been held with regards to how the Viterra Scotties and SaskTel Tankard might be held in some form or another -- just not the provincial curling extravaganza that would have taken place in Estevan.

“Curl Sask has four scenarios to declare Saskatchewan’s representatives for the Tim Hortons Brier and Scotties Tournament of Hearts, these are focused on preserving elements of open entry and competition,” the provincial body said at the time, later adding that a number of scenarios had been approved and were awaiting the go-ahead. The final decision will revolve around the current public health measures in place until Jan. 15.

“We now await further word from the Government of Saskatchewan and the Public Health Measure that is set to expire on January 15, 2020,” Curl Sask said in a press release. “After this date, a further update will be provided.”

Matt Dunstone is the reigning provincial Tankard champion and finished third in 2020 in Kingston; Robyn Silvernagle represented the province at the 2020 Scotties and reached the playoff round before finishing fifth with a 6-5 record.