'“I know there will be some hardship during the time of construction, but I believe that administration and those people who did the work learned valuable lessons in the past,' said Coun. Heather Eby
Mar 24, 2020 4:30 PM By: Jason G. Antonio 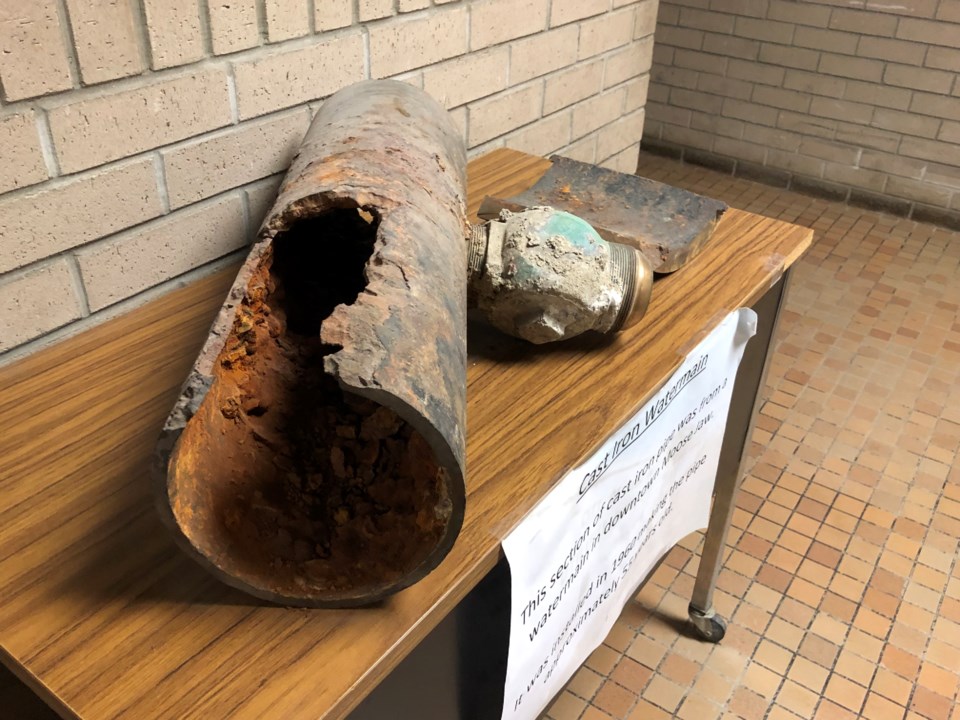 This 55-year-old section of cast iron pipe from a water main in downtown Moose Jaw is on display at city hall, giving resident an idea of the quality of some pipes underground. Photo by Jason G. Antonio

Although it will likely cause hardship to businesses on Fairford Street East and High Street West, the replacement of cast iron pipes on those streets will still proceed this construction season.

Council discussed the issue in-camera — behind closed doors — before re-opening its meeting and voting 6-1 to receive and file a report from city administration about the project. Coun. Brian Swanson was opposed.

Due to the pandemic and the order that two metres (six feet) need to be maintained between people, councillors Dawn Luhning, Heather Eby and Chris Warren participated in the meeting from home via technology. Mayor Fraser Tolmie and councillors Swanson, Crystal Froese and Scott McMann sat further away from each other.

After the vote, city clerk/solicitor Myron Gulka-Tiechko informed the three housebound councillors that the media had returned to council chambers. This prompted Eby to speak up and say she had been in favour — and was still in favour — of replacing the cast iron pipes on these two particular streets this season.

She didn’t want to see businesses on Fairford Street East or High Street West negatively affected, she said, but she wanted to see this work finished since it would complete the replacement.

“I know there will be some hardship during the time of construction, but I believe that administration and those people who did the work learned valuable lessons in the past … on High Street,” she continued. “In the long run, this will be the best thing for those businesses.”

There is still good access to businesses on High Street, especially with back alley entrances and parking lots, Eby remarked. It’s not ideal, but it will be ideal to complete the work and have long sections of cast iron pipes replaced. This will also lead to fewer rampant pipe breaks in the future.

The next executive committee meeting is set for Monday, April 13.