BANGKOK — Pro-democracy activists in Thailand staged a fourth straight day of high-profile protests in the capital on Saturday, thwarting efforts by the authorities to stop them, including a shutdown of the city's mass transit systems.
Oct 17, 2020 12:24 PM By: Canadian Press 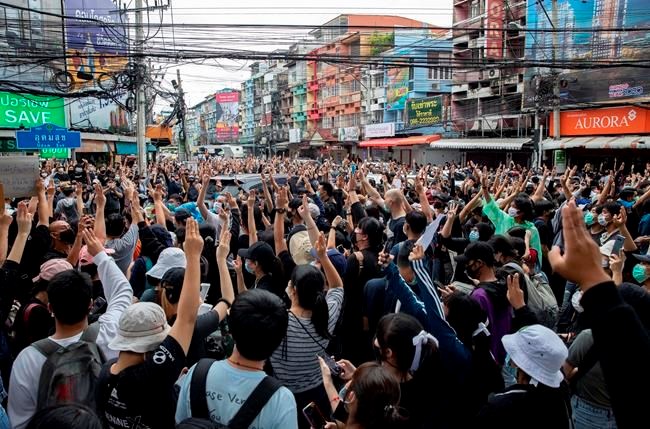 BANGKOK — Pro-democracy activists in Thailand staged a fourth straight day of high-profile protests in the capital on Saturday, thwarting efforts by the authorities to stop them, including a shutdown of the city's mass transit systems.

Unlike protests a day earlier, in which police used a water cannon to disperse protesters, Saturday's demonstrations were peaceful, with no reports of any clashes by the time participants started heading home in the evening.

The protesters are calling for Prime Minister Prayuth Chan-ocha to leave office, the constitution to be amended to make it more democratic and the nation’s monarchy to undergo reform.

All stations of Bangkok’s elevated Skytrain transit system were closed Saturday afternoon to try to keep protesters from gathering. The underground MRT system was also shut, and police blocked off several roads.

Protesters met anyway as planned at the Skytrain stations, where they held small impromptu rallies, in effect establishing a temporary but active presence across the city.

The organizers then issued a fresh advisory for followers to gather at three stations outside the city’s central area, where access was easier. Once that was announced, money was pooled by participants so they could take taxis to get around the transit shutdown.

“Right now we can do nothing much,” said a 26-year-old hotel worker who asked to be called only Veronica. “What we can do right now is only show our power to let the outside see."

Several thousand people gathered in multiple locations, with some taking turns airing their views over a megaphone. By the evening, police had not disturbed them, even when some groups took to marching in the street. Protesters began dispersing at 8 p.m., the time organizers had said the protests would end.

The protesters acted despite a state of emergency imposed by Prayuth on Thursday that makes them all subject to arrest.

They also appeared not to be cowed by a crackdown on their rally in central Bangkok on Friday night, in which riot police backed up by water cannons cleared the streets in about an hour.

No major injuries were reported from that confrontation. It was the first time in three months of sporadic protests that the authorities have employed such forceful tactics against the student-led movement.

A 20-year-old student who used the name Ryo said Friday night’s events had hardened his resistance.

“I respect people’s political opinions, but after yesterday’s incident, I feel it was so harsh, perpetrating violence against unarmed people who had no weapons to fight back,” he said.

Protective gear such as goggles was distributed Saturday at some venues.

Friday night’s violent dispersal led the People’s Party, the protesters' umbrella organization, to declare in a statement that “the government and military have established themselves as the enemy of the people,” Most of the group’s top leaders have been arrested.

The protesters have been doing their best to elude the authorities, using social media to assemble followers before police have time to block them. The government has announced plans to take legal action against Twitter and Facebook accounts that announce the protests, but fresh calls to action were posted Saturday.

The protesters charge that Prayuth, who as army commander led a 2014 coup that toppled an elected government, was returned to power unfairly in last year’s general election because laws had been changed to a pro-military party. The protesters say a constitution promulgated under military rule and passed in a referendum in which campaigning against it was illegal is undemocratic.

The call by the protesters for reform of the monarchy has significantly raised the political temperature in Thailand, angering many older conservative Thais for whom any critical discussion of the royal family is tantamount to treason.

King Maha Vajiralongkorn and other key members of the royal family are protected by a lese majeste law that has regularly been used to silence critics who risk up to 15 years in prison if deemed to have insulted the institution.

Prayuth’s declaration of a state of emergency said the measure was necessary because “certain groups of perpetrators intended to instigate an untoward incident and movement in the Bangkok area by way of various methods and via different channels, including causing obstruction to the royal motorcade.”

He was referring to an incident Wednesday that showed some members of a small crowd heckling a motorcade carrying Queen Suthida and Prince Dipangkorn as it slowly passed.

On Friday, two activists were arrested under a law covering violence against the queen for their alleged part in the incident. They could face up to life in prison if convicted. They denied any wrongdoing.

Early vote total exceeds 2016; GOP chips at Dems' advantage
Oct 26, 2020 2:15 AM
Comments
We welcome your feedback and encourage you to share your thoughts. We ask that you be respectful of others and their points of view, refrain from personal attacks and stay on topic. To learn about our commenting policies and how we moderate, please read our Community Guidelines.