BOULDER, Colo. — Nearly 3,000 people were forced to flee from a fast-moving fire in north-central Colorado and authorities believe a large number of homes were destroyed.
Oct 18, 2020 6:36 PM By: Canadian Press 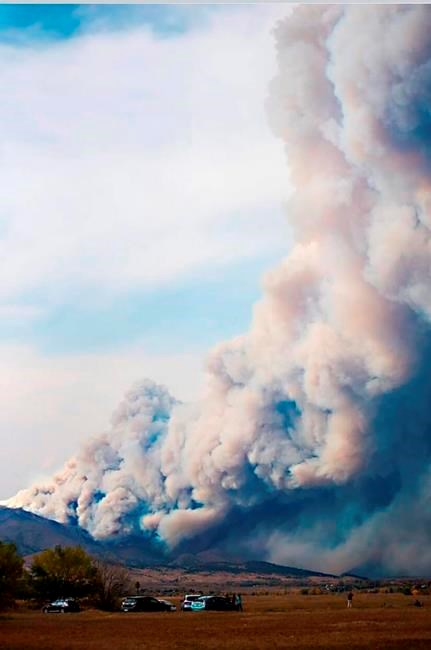 BOULDER, Colo. — Nearly 3,000 people were forced to flee from a fast-moving fire in north-central Colorado and authorities believe a large number of homes were destroyed.

The CalWood Fire started around noon Saturday near the Cal-Wood Education Center, which is about 17 miles (27 ) from downtown Boulder. It was pushed by strong winds. The National Center for Atmospheric Research's Mesa lab recorded gusts of 59 mph (95 kph) on Saturday.

More than 1,600 residences and nearly 3,000 people were under evacuation orders, including the small town of Jamestown, Boulder County officials said.

Based on the path of the fire, officials believe it is likely that many homes were lost, Mike Wagner, the Boulder County sheriff’s division chief, said Sunday.

Wagner said damage assessment teams haven't been able to get into the area to determine how many homes were lost. A news photographer for the Daily Camera later captured several images of what appeared to be burned homes.

Courtney Walsh was one of those who lost her home, she told The Denver Post.

She said she had about a 30-minute warning to gather up her children, animals and some belongings before sheriff's deputies urged her to leave the house on Saturday afternoon.

"We were just waiting and waiting, and you know there is Twitter and live feeds,” she said Sunday. “Then we saw a picture from the National Weather Service, and it focused on our house burning. So then we knew.

“There were baby books that I didn’t grab, and I’m regretting it,” Walsh said Sunday, fighting tears. “Those are the one thing I always thought, ‘I have to grab those if anything happens,’ and I just didn’t. I froze.”

Shannon Kiss said smoke from the CalWood fire started seeping into her condo near Gunbarrel on Friday night, so she and her 14-year-old daughter taped up the doors and placed towels and blankets on the floor.

“We went outside and the ash was hitting our face,” she told The Associated Press on Sunday. “The wind was blowing and it felt almost like a windy rain, but it was ash hitting our face.”

On Saturday, they prepared to evacuate.

“We saw the huge, billowing smoke coming from the foothills,” she said. “I’ve seen (fires) in the distance in the mountains, but never a populated area. Never this close.”

But by Saturday evening, it was clear the fire wouldn't force them from their home.

“Everyone is thrilled with the weather this morning,” Jennifer Bray, spokesperson with the Boulder County Emergency Operations Center told The Denver Post on Sunday. “And hoping that will be a big help in their efforts today.”

The plan for Sunday was for aerial crews to hit the fire “as hard as they can” before winds picked up later in the day, Wagner said.

A fire that started Sunday on private property about 20 miles (32 ) northwest of Boulder and grew to just over one-third of a square mile (1 square ) led to the evacuation of at least 145 homes, including the small town of Ward, which has about 150 residents, Boulder County officials said.

Meanwhile, the Cameron Peak fire, which started in mid-August and is burning west of Fort Collins, has grown to 318 square miles (823 square ) and was 62% contained on Sunday. More than 1,500 firefighters are working the blaze, which is the largest fire in Colorado history.

A spot fire east of the main Cameron Peak fire burned homes overnight Friday and into Saturday, Larimer County Sheriff Justin Smith said in a Facebook post Sunday morning. He said homes were lost in The Retreat in Glen Haven, but did not say how many. The sheriff's office will assess the damage and notify homeowners.

Winds were expected to be lighter on Sunday and some precipitation was in the forecast allowing fire crews to more aggressively fight the fire, fire information officer Cass Cairns said.

Mexico broadcaster: Pope's civil union quote not broadcast
Oct 22, 2020 5:36 PM
Comments
We welcome your feedback and encourage you to share your thoughts. We ask that you be respectful of others and their points of view, refrain from personal attacks and stay on topic. To learn about our commenting policies and how we moderate, please read our Community Guidelines.