THE HAGUE, Netherlands — International Criminal Court appeals judges on Tuesday upheld the convictions and 30-year prison sentence of a Congolese warlord known as “The Terminator” who was found guilty of crimes including murder, rape and sexual slave
Mar 30, 2021 12:10 PM By: Canadian Press 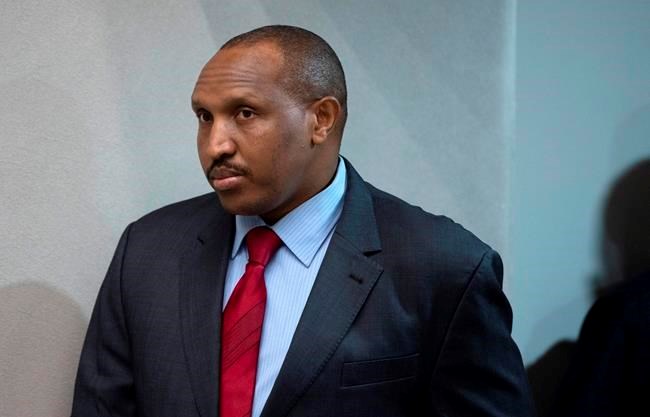 THE HAGUE, Netherlands — International Criminal Court appeals judges on Tuesday upheld the convictions and 30-year prison sentence of a Congolese warlord known as “The Terminator” who was found guilty of crimes including murder, rape and sexual slavery.

Bosco Ntaganda was convicted in July 2019 for his role as a commander of rebels responsible for atrocities committed during a brutal ethnic conflict in a mineral-rich region of Congo in 2002-2003.

The global court found him guilty of a total of 18 counts of crimes against humanity and war crimes.

On Tuesday, a five-judge appeals panel rejected all 15 of Ntaganda’s challenges to the convictions and also upheld his sentence.

The judges also rejected an appeal by prosecutors challenging a legal point in the original trial decision.

“The appeals chamber confirms by a majority the conviction decision and rejects the appeal lodged by Mr Ntaganda and the prosecutor,” Presiding Judge Howard Morrison said.

Ntaganda, wearing a face mask for the hearing, sat impassively as Morrison read out a lengthy summary of the appeals chamber’s findings.

Ntaganda became a symbol for impunity in Africa in the years between his indictment and his surrender to the court in 2013. He has always insisted he was innocent.

Judges at his trial disagreed, saying he was guilty as a direct perpetrator of a murder and as an indirect co-perpetrator of crimes committed by his rebel militia forces including murders, rapes of men and women, a massacre in a banana field and of enlisting and using child soldiers.

The group Physicians for Human Rights welcomed the confirmation of Ntaganda's convictions for crimes committed in the Ituri region of the African nation formally known as Democratic Republic of Congo.

“Today’s decision is a milestone for international justice and a long-sought victory for survivors in Ituri, DRC, who have waited nearly two decades for Ntaganda to be held to account for terrorizing the country,” said Karen Naimer, the group's director of programs.

“The conviction is also an important step for the prosecution of rape and systematic sexual violence as a crime against humanity, which for far too long has been overlooked by courts around the world,” Naimer added.

Ntaganda himself used child soldiers as bodyguards in his position as deputy chief of staff and commander of operations for the Patriotic Forces for the Liberation of Congo rebel group. The force’s leader, Thomas Lubanga, was convicted by the ICC in 2012 of using child soldiers. He is serving a 14-year prison sentence.

Stephen J. Rapp, a former U.S. ambassador-at-large for global criminal justice, used the case to call for an end to sanctions on International Criminal Court staff, including its chief prosecutor, that were imposed by the Trump administration. Rapp U.S. efforts — including offering a reward for Ntaganda’s capture — that ultimately led to the warlord’s surrender and transfer to the court.

“Today’s historic victory for survivors of sexual violence is an example of what can be achieved when the United States works with the ICC, and should cause the Biden administration to act now to withdraw the Trump administration’s anti-ICC sanctions that obstruct the pathway to justice for survivors of mass atrocities,” Rapp said in a statement released by Physicians for Human Rights.