El Salvador's next US envoy met Trump at Miss Universe

SAN SALVADOR, El Salvador — El Salvador's next ambassador to Washington is someone President Donald Trump might remember from his days as a beauty pageant boss.
Sep 26, 2020 12:32 PM By: Canadian Press 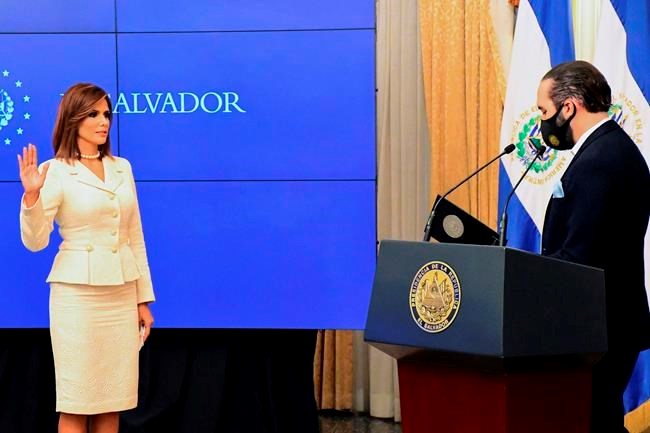 SAN SALVADOR, El Salvador — El Salvador's next ambassador to Washington is someone President Donald Trump might remember from his days as a beauty pageant boss.

A photo circulating on social media Friday showed a smiling Trump locking arms with Milena Mayorga and two other contestants - Miss USA and Miss Guatemala - on the sidelines of the 1996 Miss Universe pageant, where she was a top 10 finalist. Trump at the time was owner of the pageant.

Mayorga, 44, was appointed Thursday night by President Nayib Bukele as El Salvador's next ambassador to the U.S.

She's a political neophyte with no previous diplomatic experience, having been elected to congress for the first time in 2018.

But she's well known to Salvadorans for years as a popular TV host.

Mayorga garnered the president's attention after denouncing corruption in her conservative ARENA party, which as the dominant force in congress has blocked Bukele's agenda. She later quit the party.

As ambassador, she'll face an uphill battle trying to repair deteriorating relations with Republicans and Democrats in Congress who have increasingly voiced concern that Bukele, although highly popular, is overstepping his authority and threatening checks and balances in the small Central American country.

While Bukele has endeared himself to Trump by backing his hardline immigration policies, he's faced criticism among human rights and pro-democracy activists for defying El Salvador's supreme court and congress.

On Thursday, six Republican congressmen led by David Royce of Ohio and Mario Diaz Balart of Miami wrote a letter to Bukele expressing concern about what they called El Salvador's “slow but sure departure from the rule of law and norms of democracy that our hemisphere has fought so hard to preserve.”

The letter provoked an angry response on national TV from Bukele, who dismissed the letter - which followed similar complaints by Democrats - as the work of a small group of lawmakers that don't represent even 3% of the entire U.S. Congress.

“Getting congressmen to write a letter is the easiest thing in the world,” Bukele said.

Criticism of Bukele stems from his repeated defiance of congress and the supreme court.

In February, he sent heavily armed soldiers to surround the congress to pressure lawmakers into approving a loan to fund a fight against gangs. Then in April, Bukele ignored several rulings by El Salvador’s supreme court striking down strict measures that led to the detention in crowded quarantine of hundreds of people accused of breaking the coronavirus lockdown rules.

He also recently attacked one of Central America's most independent investigative news outlets, El Faro, after it uncovered evidence that the government had been secretly negotiating with jailed members of MS-13, which is considered a terrorist group in El Salvador.

Throughout the confrontation, he's maintained strong support from the Trump administration and U.S. Ambassador Ronald Johnson. Bukele last year signed a bilateral agreement that would allow the U.S. to send asylum seekers from other countries to El Salvador. The policy had not been implemented before the pandemic.

In August, his government signed a $450,000 contrac t with a well-connected Washington lobbyist, according to U.S. Department of Justice filings. Bukele claims to have annulled the contract with the Sonoran Policy Group without having disbursed any funds.

Mayorga has generated controversy inside El Salvador for on social media the deceased military commander behind the 1981 raid on the village of El Mozote, a gruesome low point during the country's long civil war. Almost 1,000 people, including farmers and children, were killed by U.S.-trained counterinsurgency troops during a hunt for leftist guerrillas.

“Some people never die, they just convert into myths and legends,” she wrote in a 2018 tribute to army Col. Domingo Monterrosa on the anniversary of the commander's birth. Monterrosa was later killed when a guerrilla bomb destroyed the helicopter he was in.

Mayorga was a top 10 finalist at the 1996 Miss Universe won by Alicia Machado, a former Miss Venezuela who campaigned against Trump in the 2016 campaign. Machado accused Trump of labeling her with a sexist nickname — “Miss Piggy” — that caused her shame and humiliation after she was crowned Miss Universe.

Early vote total exceeds 2016; GOP chips at Dems' advantage
Oct 26, 2020 2:15 AM
Comments
We welcome your feedback and encourage you to share your thoughts. We ask that you be respectful of others and their points of view, refrain from personal attacks and stay on topic. To learn about our commenting policies and how we moderate, please read our Community Guidelines.