CARACAS, Venezuela — The glowing face of one of Venezuela’s greatest athletes seems to invigorate a corner of the country’s decaying capital, a splash of colour and inspiration for increasingly grim times.
Jan 14, 2021 10:08 AM By: Canadian Press 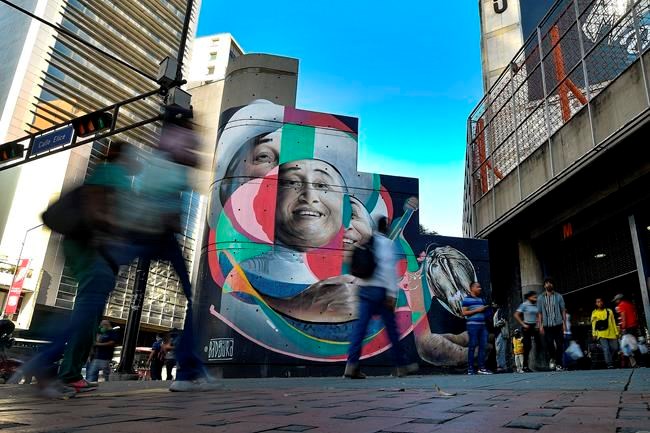 CARACAS, Venezuela — The glowing face of one of Venezuela’s greatest athletes seems to invigorate a corner of the country’s decaying capital, a splash of and inspiration for increasingly grim times.

Elsewhere, swirls of patterns surround a realistic portrait of beloved singer and actor Simon Diaz, an immense image on a wall towering over a Caracas street.

Wolfgang Salazar has gained increasing fame for his spray-painted murals of Venezuelans — heroes and everyday folk alike — at a time when the pandemic and economic hardship weigh upon his fellow citizens.

“I want people to smile for a moment,” said the 30-year-old Salazar. “I want them to go home with a different kind of story to tell.”

His most recent work, commissioned by a Caracas restaurant, triple-jump indoor world record setter Yulimar Rojas, the first Venezuelan as athlete of the year by World Athletics.

Salazar said he painted Rojas because she embodies the potential of Venezuelan greatness.

Salazar uses the artistic name of Badsura, a play on the English “bad” and the Spanish word “basura,” for “garbage.” He says he’s part of a campaign to legitimize the street art of graffiti and has been invited to several countries in Latin America and Europe to paint murals.

His work also alludes to tough times in a country suffering hyperinflation and hardships that have led at least 5 million to flee abroad.

One mural at Venezuela’s Central University in Caracas shows a man shouldering a natural gas canister — something hard to find of late despite the country’s oil wealth — next to a grandmother holding up candle.

“The main goal is that people see a reflection of themselves,” said Salazar, who added that he hopes people will see the murals and say: “I exist. What happens to me exists. I’m real. I feel identified.”