I will be the first to admit that I jumped on the Toronto Raptors bandwagon, but I wasn’t alone — I had millions of other Canadians along for the ride. I will also admit that I received an education in b-ball or, as regular folks say, basketball from my six game, one series exposure to “bouncy ball.” I am now an expert. I am sure the NBA Champions, Toronto Raptors, appreciated my support for their most important series ever and I am convinced it was my support and not Drake’s that was the final piece of the basketball championship puzzle. 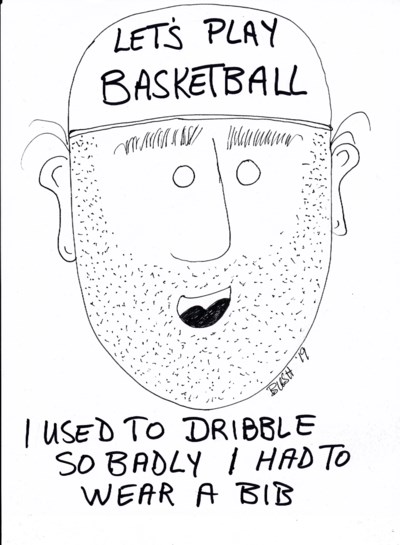 Art by Dale "bushy" Bush
I was never a fan of basketball, a game I rarely played, and I am sure that for the most part that might be because I am…well…a Canadian. There, I said it!  As bad as that may sound, it just might be the truth. Like most Canadian kids, I played hockey during the winter and hardly ever played basketball, mostly because the two sports have identical seasons. While there seemed to be a hockey rink at every community center, the floor space for basketball was restricted to gymnasiums during the winter. That is not to say there weren’t any leagues, but instead of bouncing a ball during the winter, I was getting bounced playing hockey…and loving it. I played b-ball (poorly) during gym class.  You would have thought I might have inherited a few bouncy-ball skills from my mother who was a huge fan of the game.

My Mom played basketball as a schoolgirl. Her story might have a familiar ring to it, for other opportunity-challenged female athletes. There was no such thing as girls and lady’s hockey, and ringette wasn’t ringing yet, so if you wanted to participate in a winter “women’s sport” you either figure-skated, which was not exactly a team sport, or you played basketball, which is.

Mom was vertically challenged with a height of 5 feet 3 inches. The 10-foot height of the basket must have seemed like it was miles away, but she had some moderate success in high school basketball and had a cherished team photo of “the Gals” with a pretty impressive trophy. Mom went on to organize and coach in a girl’s basketball league in Calgary, which gave my sisters and many other female athletes the chance to play in a winter team sport.

It was a lady’s basketball team that put Canada on the world basketball map long before the Raptors had their impressive NBA victory. More than a century ago, there was a girl’s high school basketball team from Edmonton, the Grads, that achieved the most successful winning percentage streak — a mere 95 per cent — for a sports team…ever! That impressive feat has yet to be beaten, but it did take the Grads almost 25 years of whupping their opponents to have had their success streak ended with the start of WW2. With an estimated win/loss record of 522 wins and 20 losses, the record will probably stand for eons. Most pro teams today would give the world for a modicum of that success.

Now that Canada (Toronto) has tasted the champagne of the National Basketball Association’s 2019 championship, there seems to be the likelihood of the sport gaining in popularity, and why not? There is little equipment required and with modest athletic skills almost anyone can enjoy the game of bouncy-shooty. It seems that basketball appeals to Canadians from all walks of life and from all heritages.

I think my Mom would just be tickled to witness this rise in popularity of “her” game. I predict that all over Canada, vertically-challenged ball-bouncers will be dribbling all over the place…I hope they clean up after themselves.