Last fall we had some new neighbours move into their newly built house, a few doors down the block. They have kids, so there have been some changes in da hood. Those changes are mostly related to noise.

While some grouchy old neighbours grumble, I for one welcome the sound of three children playing in their yard. It is far more appealing than another neighbour who insists on playing Creedence Clearwater Revival when she gardens, although I don’t mind some classic rock and roll.  As a musician, I am okay with folks who enjoy music, but I believe she has only one CCR recording and when she plays it over and over I worry about the plants in her garden and how they will be affected. 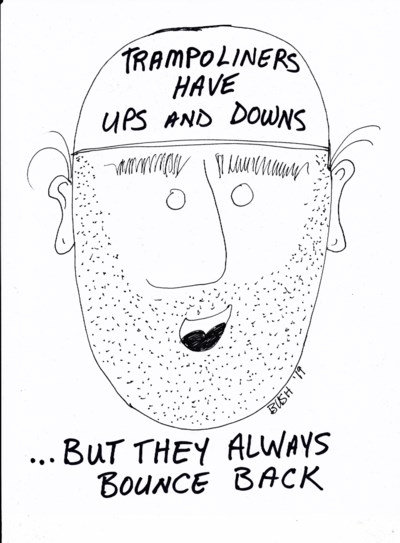 Art by Dale "bushy" Bush
These beautifully noisy kids range in age from about nine (the oldest brother) to the youngest brother (about four) with a sister in between. They do spend a great amount of time in their yard. That seems to buck the trend of children spending more time with computers and video games than with the great outdoors, but that requires outdoor toys and equipment for those diversions. Computers and video games can cost a fortune but so can modern outdoor toys.

There is no shortage of new ways for modern kids to be distracted. I think that the perfect outdoor children’s toy should be economical, easy to use and maybe most importantly…no batteries required. There seems to be a standard piece of backyard equipment that satisfies all that criteria, but it can be expensive…and dangerous, which makes it a perfect kid’s toy. A trampoline gets bouncy high marks for entertainment, ease of operation and maybe most importantly many diverse uses.

The trampoline was developed in the 1930s as a training device for gymnastics. It wasn’t long before bouncing became popular as recreation and then its own sport. The spring-loaded contraption was popularized in the early '60s with the development of bounce parks which was a place where you could go hurt yourself and maybe lose some teeth — after you signed a waiver of course. The high cost of dental repairs might have been a reason tramp parks became less popular in the '70s, but with better healthcare these days those old outdoor bounce parks are regaining acceptance and moving indoors. You still have to sign a waiver, which should endear the sport to daredevils, but you can now risk your life in the comfort of you own backyard as manufacturers adapt the trampoline to the consumer’s needs.

My beautiful bride has her own trampoline that she/we can exercise on in the basement called a rebounder.  I have to admit, it is an exercise tool that really does get the blood coursing through the veins. After about 10 minutes of bouncing I am a pooped puppy and ready for a recovery nap, but Mrs. B can bounce for what seems to be an eternity; she is a fit, dedicated bouncer. The kids down the street must be in Olympic athlete condition because they are constantly on the bounce for hours.

Kid’s trampolines now come with safety netting which has reduced the danger factor and has given mothers peace of mind for a few reasons, safety of course. With some modifications (locks and feeding/watering slots) that netting can be used as a nice kids’ cage which allows a parent to always be aware of where the kids are. With regular feeding and watering, they will continue to grow and mom can get her housework completed.

The trampoline has been around for decades with its popularity coming and going, but one thing for sure…it has had its ups and downs and will continue to bounce back.