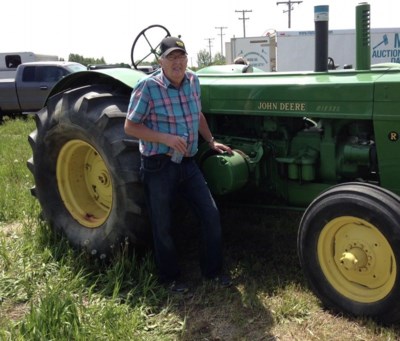 Eric was raised on the family farm near Marquis, SK, until he later moved into Regina, SK after meeting Marlene and started a family with the birth of Randy. Eric worked as a welder for numerous years before the calling of the family farm brought him back. The birth of Rhonda and Michelle followed soon. Eric was a passionate farmer with a love of the land and animals. He was always there to give a helping hand to neighbors and friends. Eric volunteered numerous hours at the Tuxford Rink between making and maintaining curling ice and helping with the numerous bonspiels. After retirement, Eric and Marlene enjoyed the winters in Mesa, Arizona where they played cards and had the occasional happy hour. Eric took great pride in his vehicles, whether it was his John Deere tractors or his GM truck.

Eric will be missed by the people he leaves behind and the lives that he touched. Special thanks to the staff of Chez Nous for all the great care, support and lunchtime meals.

In keeping with Eric’s wishes, a Private Family Graveside Service will be held at a later date.