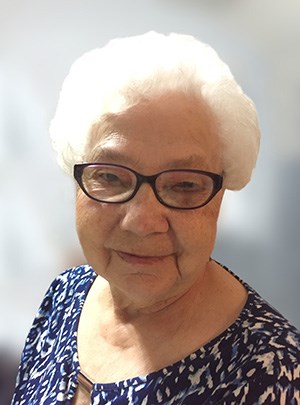 It is with profound sadness that the family of Margaret Lydia Thronberg announce her peaceful passing on Thursday August 29, 2019, in her 89th year.  Mom passed away at home surrounding by her loving family.

Margaret was born on February 15, 1930, in Briercrest, Saskatchewan, one of 13 children of Christian and Bertha Huber.  Early years were spent growing up in the Spring Valley District, eventually coming to Moose Jaw and working at the Providence Hospital.

Over the years, while the family was growing, Margaret worked as a cashier at Loblaws and Safeway’s to name a few.  Family was of greatest importance and the achievements of her children made her very proud.  Mom’s favourite things were organizing and having Christmas gatherings and B-B-Q’s with her family including her sister’s and brother’s.  When travelling, “I love to look up at the sky, there are lovely pictures up there if you use your imagination”.  Mom enjoyed many trips with dad to Ontario to visit “the eastern family” – Uncle Dave, Aunt Frieda and their family the latest in May of 2019, for her nieces wedding.

Margaret was a long-time member of the Eastend Social Club, #9 Cubs and Scouts and the #9 Brownies and Girl Guides.  If there was an opportunity to dance, mom could be found on the dancefloor enjoying a two-step, polka, square dance and many more.

The Funeral Service will be held at Emmanuel Lutheran Church, 15 Paul Drive in Moose Jaw, Saskatchewan on Thursday September 5, 2019 at 11:00 a.m.  Reverend John Kreutzwieser will offiate.  A time of Visitation for Family and Friends will be held on Wednesday, September 4, 2019 from 7:30 to 8:30 p.m. at Moose Jaw Funeral Home.

The family thanks the many caregivers who came to provide care to Mom during her last months and to Dr. J. Vermaak for his professionalism and outstanding care and commitment. In lieu of flowers, donations in Margaret’s name may be made to a charity of one’s choice.   Arrangements are entrusted to Moose Jaw Funeral Home, 268 Mulberry Lane.  Gary McDowell, Funeral Director 306-693-4550 www.moosejawfuneralhome.com

“God saw you getting tired, your work on earth was done; He put His arms around you, and whispered ‘Come with me”.  He took you to his garden, and laid you there to rest, God’s garden must be beautiful, for he only take the best”.