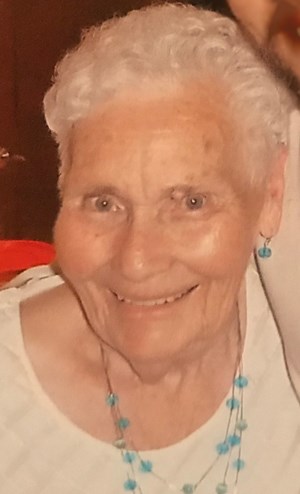 It is with great sadness that we announce the passing of Audrey Johnson (Hartell) on July 3, 2019 at the age of 85.  Audrey was born to John and Lily Pope (Tapp) at Fort Qu’Appelle, Saskatchewan.  Audrey resided on the family farm south east of Tugaske with her parents and siblings.  Audrey had great memories of her life growing up on the family farm.  Upon completing school Audrey moved to Moose Jaw and worked at a confectionary in Moose Jaw.   Audrey married Nelson Hartell October 17, 1953 and they made their home in Tugaske.  Audrey and Nelson were blessed with 3 children – Ken, Faye and Joan.

Nelson and Audrey celebrated their 40th   Anniversary surrounded by family October of 1993.  Nelson passed away March 1994.  Audrey married Roy Johnson in 1996 and moved to Moose Jaw.  Roy and Audrey enjoyed 12 years together till Roy’s passing in 2008.

A devoted loving Mom, Grandma and homemaker Audrey was a fabulous cook and enjoyed preparing meals, delicious deserts and treats to share with anyone who happened to drop in.  Coffee was always on and Audrey’s kitchen was the hub for socialization and hospitality.    Being a farm girl at heart, gardening was also a passion – canning and preserving vegetables and fruit to be enjoyed throughout the year.  Audrey was also always ready for a good card game - always striving for that “29 Hand!”

“Mom’s hold their children’s hands for a while …their hearts forever. “

In keeping with Audrey’s wishes, a Private Family Celebration of her Life will be held at the Tugaske Cemetary.  As an expression of sympathy, donations in Audrey’s name may be made to the Tugaske Cemetery, Box 62, Tugaske,, SK S0H 4B0. The family would like to give thanks and appreciation to the staff at West Park Crossing for the kindness and care that they gave to Audrey during her time there.  Arrangements are entrusted to Moose Jaw Funeral Home, 268 Mulberry Lane.  Gary McDowell, Funeral Director 306-693-4550 www.moosejawfuneralhome.com