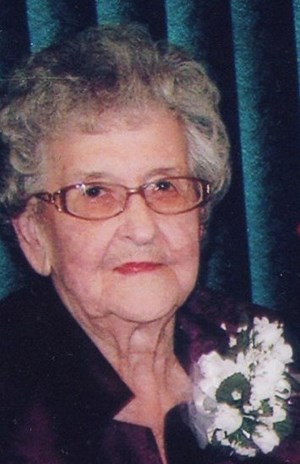 Gertrude Mary Hicke (Wostradowski) passed away peacefully on Friday July 26th, 2019.  Gertie was born on March 7th, 1925 in Bayard, where she was raised and received her education.  She married Zack on April 10th, 1944 at St. Joseph’s Church in Moose Jaw.  They were married for 67 years until Zack’s passing in 2011.  They farmed in Spring Valley and south of Moose Jaw until retiring to Moose Jaw in 1985.  Gertie was a wonderful mother to her four sons.  She was a great cook and especially liked to make desserts for Zack.  Gertie was the best mother-in-law and respected her boys and daughter-in-law’s.  She tended to gardening and many farm duties.  She was a very fussy house keeper and the boys were not allowed to go into their drawers for fear of “messing up” neatly folded and ironed clothes.  Gertie is survived by her sons: Jerry (Leona), Glen (Rosanna), Ralph (Lorna) and Kelvin (Jo-Anne); eight grandchildren, ten great grandchildren; sister in law, Lillian Wostradowski and many nieces and nephews.  The Funeral Service will be held on Tuesday, August 6th, 2019 at 11:00 AM in Moose Jaw Funeral Home.  Al Rossler will officiate.  A private family burial will take place at a later date. Flowers are gratefully declined.  As an expression of sympathy, donations in Gertie’s name may be made to a charity of one’s choice.  The family would like to thank Crescent Park Villa staff for their many years of care and especially the staff at Extendicare for their dedicated care in her final years.  Arrangements are entrusted to Moose Jaw Funeral Home, 268 Mulberry Lane.  Michelle Surtees, Funeral Director 306-693-4550 www.moosejawfuneralhome.com