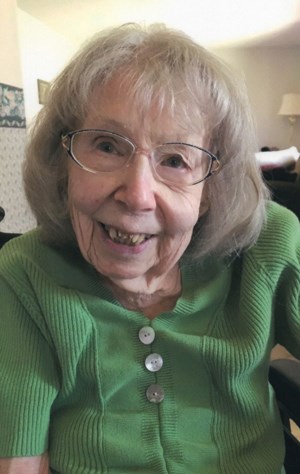 It is with heavy hearts that we announce the passing of Amy Ruth Hartell on Monday, July 1st, 2019 at the age of 95 years.

Ruth was born on her Uncle Dick Greenfield’s homestead northeast of Tugaske, SK on October 30th, 1923 to Noel and Amy (Greenfield) Chamberlain. Two weeks later the family moved into town when her Dad became postmaster. Ruth attended school in Tugaske and upon completion she joined the Royal Canadian Air Force, Women’s Division. After two months of basic training in Ottawa and a two month course as a clerk general she was posted to No. 3 Wireless School in Winnipeg as a time keeper. Ruth later re-mustered as a postal clerk, completing her duties in Trenton and being discharged in September of 1945. Ruth began training at the Providence Hospital in Moose Jaw, graduating in 1950 as a Registered Nurse. Her nursing duties took her to Central Butte, Outlook and Regina General. In November of 1954 Ruth married Lorne Hartell and resumed her life back in Tugaske, where they raised their family and built their “retirement home”. Ruth remained in Tugaske until seven weeks prior to her passing when she took up residence in the Regency Manor Care Home in Central Butte, SK.

She was predeceased by her husband of 32 years, Lorne; her parents, Noel and Amy Chamberlain; father and mother-in-law, Wilson and Florence Hartell; sister-in-law, Iris (Jack) McKee; and brothers-in-law, Nelson Hartell, Leslie Hartell, Frank Hunter, Al McKinnon, and Roy Johnson. Ruth is survived by her sons, Allan (Donna) and Gary (Mavis); daughter, Dianne; and three grandchildren: Breanne (Andrew) Couperthwaite, Logan and Tyson. She is also survived by her brother, Bert (Jessie)

Chamberlain; sisters-in-law: Dorothy McKinnon, Audrey Johnson, and Lorraine Hartell; and by numerous nieces and nephews. Ruth was a member of St. Andrew’s United Church, Tugaske. As a family we feel so blessed to have had her with us for such a long time. Her light and love will remain in our hearts for eternity. “Goodnight Mum, God Bless”.

A Celebration of Ruth’s Life will be held on Monday, July 8th, 2019 at 2:00 p.m. in the Tugaske Community Center. Sandra Fowler will officiate and interment will take place in the Tugaske Cemetery. The family wishes to thank Shasta Zeeman, NP and all of the caring staff at Regency Manor for all of the love and kindness that they showered upon our Mum during her brief stay with them. In lieu of flowers memorial donations may be made to the Moose Jaw Humane Society, Box 1658 Stn Main, Moose Jaw, SK S6H 7K7 or Central Butte Regency Manor Auxiliary, Box 361, Central Butte, SK S0H 0T0. Arrangements are entrusted to Moose Jaw Funeral Home, 268 Mulberry Lane. James Murdock, Funeral Director 306-693-4550 www.moosejawfuneralhome.com