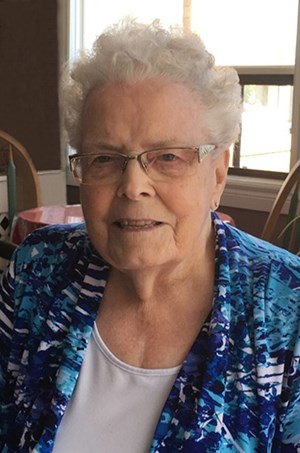 Doris Mary Hall, aged 94 years of Moose Jaw, SK passed away peacefully at Extendicare on Thursday, August 1st, 2019, after a lengthy battle with dementia.  Born February 18th, 1925 on the family farm south of Mortlach, SK, she later moved to Moose Jaw where she attended Business College.  After graduating she worked for numerous doctors’ offices in Moose Jaw.  She married the love of her life, William Eric Hall, and they worked and travelled for many years before starting a family.  She was predeceased by her husband, Eric; parents, Charles and Florence Redshaw; brothers, Art (Pat) and Ralph Redshaw; sisters and brothers-in-law: Frank (Nora) Hall, Enid (Ernie) Meadows, Gerald (Doris) Hall, and Claire (Fred) Fairburn.  Doris leaves to mourn: her sister, Anne Panser and her special friend, Dale Perry; son, Dale; daughter, Joan (Doug) Kutcher; grandsons, Max (Jessica) Kutcher and Brodie Kutcher (Hailey Deibert); granddaughter, Allison Hall (Aaron Crosbie); as well as numerous nieces, nephews and friends.  Doris especially loved her time with the great-grandchildren, as brief as it may have been.  Those special loves of her life are Aria, Ivy and Eve.  Thank you to everyone who cared for Doris through every stage of her health care journey.  It was much appreciated by the family.  In keeping with Doris’ wishes, a Private Family Interment will be held at a later date.  Flowers are gratefully declined.  As an expression of sympathy, donations in Doris’ name may be made to the charity of one’s choice.  Arrangements are entrusted to Moose Jaw Funeral Home, 268 Mulberry Lane.  Calvin Gammel, Funeral Director 306-693-4550 www.moosejawfuneralhome.com