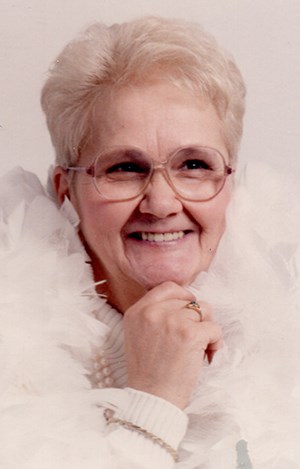 At the Dr. F.H. Wigmore Regional Hospital on Wednesday, August 7th, 2019, Ruth Evelyn Cormier passed away peacefully.  Ruth was born in Danby, Quebec on December 13th, 1931.  She was predeceased by eight of her siblings of the late Ernest and Lillian Picken: Howard (Leona), Mac (Vera), Calvin (Thelma), Marion (Norman Whiteman), Jean (Clinton French), Anna (Alton Ward) and Hazel (Roy Fleck).  Ruth was a devoted and loving mother to her 3 children: Judy (Simon) Preston of Devon, England, Wayne (Tricia) of Swift Current, SK, and Howie of Moose Jaw, SK.  Ruth was also the proud grandmother of 5 beautiful grandchildren: Kier (Sophie), Maya and Asher, Trista and Preston.  As well as being a kind and loving grandmother, Ruth was also blessed with a great-grandson, Joshua.  Ruth had a humble upbringing where she was raised on a small farm in Danby, Quebec.  As a young adult, she left the Eastern Townships to pursue nurses training at the Catherine Booth Hospital in Montreal, where she nursed unwed mothers and helped to deliver their children.  Following this, Ruth moved back to the Townships where she worked in the maternity ward at the Sherbrooke Hospital.  Ruth married Cedric Cormier in October 1955, where they settled in Lennoxville, Quebec for several years.  Cedric passed away on December 23rd, 2009.  Though times were hard, Ruth always had an ability as a mother to make a little go a long way.  Never afraid of hard work, she worked long hours as a waitress, cook and caregiver.  Ruth found the energy to set up her own Nursing Home in Lennoxville, where she was known for her kind heart and boundless energy.  In 1981, Ruth and her sons made their way to the prairies, where she found herself running a successful Children’s Day Care Centre for several years.  At age 70, Ruth retired only to find herself taking on the role of a volunteer at Providence Place in Moose Jaw, where she remained active, dedicated and highly valued.  Though Ruth’s final years of life were challenged by her Rheumatoid Arthritis, she continued to enjoy socializing with others in the apartment building where she resided, or when running errands at her local bank and pharmacy.  Everyone seemed to know Ruth - a chatty, interesting and enjoyable character of a certain age.  Ruth Cormier will be missed by her loving family, relatives, friends and acquaintances.  Rest in peace Mom, Grammie Ruth.  A Celebration of Ruth’s Life will be held on Friday, August 16th, 2019 at 11:00 a.m. in Moose Jaw Funeral Home with Dave Foley officiating.  Flowers are gratefully declined.  As an expression of sympathy, donations in Ruth’s name may be made to the Providence Place Resident’s Council, 100 – 2nd Ave NE, Moose Jaw, SK S6H 1B8.  Arrangements are entrusted to Moose Jaw Funeral Home, 268 Mulberry Lane.  Todd Sjoberg, Funeral Director 306-693-4550 www.moosejawfuneralhome.com