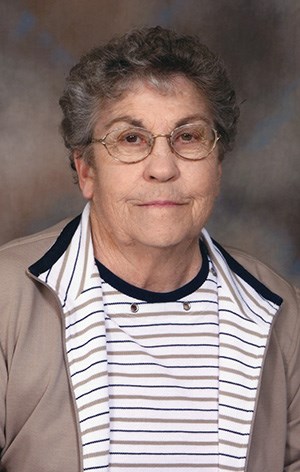 Maxine Cannon, aged 87 years of Moose Jaw, SK passed away on Monday, August 19th, 2019.  Maxine was born on March 1st, 1932 in Keystown, SK, the only child of Bert and Ruth Shropshire.  She was predeceased by her father, Bert in 1952; husband, Bernard in 1985; and mother, Ruth in 2003.  Maxine is survived by her children: Cathy (Martin Tendler) and their children Daris (Briana), Brian (Jacey), and their children Blake and Anne, Dani (Zack) and Trey (Hunter); Jim (Judy) and their children Ryan (Emily) and Riley; Patti (Kevin Wilson) and their children Stephen, Kyle, and Kaleb (Madison).  Maxine spent the first 10 years of her life in Keystown and Boharm, SK and then in 1942, she moved with her mother and father to Marquis, SK.  After her graduation, Maxine attended Business College in Regina, SK and then got a job in the administration offices of the Hotel Saskatchewan.  Maxine married Bernard Cannon on November 10th, 1953 and they moved to the Teare farm at Marquis to begin life on the farm.  In 1962 a new baby, Cathy, prompted better accommodation, and Bernard’s brother Ken supervised and built a house in Marquis.  Farming continued, but that meant that hot meals were hauled out of Marquis.  Maxine and Bernard were very active in their church and the community.  Curling, playing ball, and dancing were just a few of their activities.  Jim was born in 1965 and Patti followed in 1969, and so began many more activities.  Maxine was active in the Marquis 4H club and in 2006 she was inducted into the District 8 4H Hall of Fame.  She enjoyed her children’s activities and sat through many ball games, hockey games, curling games, and horse shows.  Maxine worked part time at the Marquis Credit Union to supplement the farm.  Due to Bernard’s health, they retired from farming in 1981 and Maxine took over the post master job in Marquis.  She held that position until 1997 at which point she moved into a house in Moose Jaw.  In 2010, she moved into Victoria Towers and made many new friends.  Maxine was very active in the Moose Jaw Warriors Booster Club and was a season ticket holder for many years.  She continued to listen to the games on the radio after she was unable to attend the games.  In 1989, Maxine’s life changed again and grandchildren started arriving.  This meant more sporting activities and more ball diamonds, and more hockey rinks.  Maxine received her 60 year pin of being a member of the CWL 2 years ago and this past June, she attended a CWL anniversary in Marquis and spent a pleasant day catching up with old acquaintances.  Maxine never had the best health, but thankfully she maintained her independence until July 2019 when ill health forced her to make changes.  Her wit, humour, and sassiness never left her.  Maxine will be greatly missed at all of our family functions by her children, grandchildren, and great-grandchildren.  The family would like to thank the caring staff at Pioneer Lodge and the Dr. F.H. Wigmore Regional Hospital.  The Funeral Mass will be celebrated on Monday, August 26th, 2019 at 11:00 a.m. in St. Joseph’s Roman Catholic Church, 1064 3rd Ave NW, Moose Jaw, SK.  Father George Thattuparampil will be the presiding celebrant and interment will take place at St. John’s Cemetery in Marquis, SK.  A Prayer Service will be held on Sunday, August 25th, 2019 at 7:00 p.m. in Moose Jaw Funeral Home.  As an expression of sympathy, donations in Maxine’s name may be made to the St. John’s Cemetery Fund, Box 54, Marquis, SK S0H 2X0.  Arrangements are entrusted to Moose Jaw Funeral Home, 268 Mulberry Lane.  Gary McDowell, Funeral Director 306-693-4550 www.moosejawfuneralhome.com