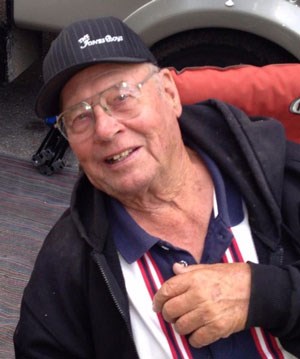 Calvin was born in Tuxford, SK on July 15th, 1927. He was a successful entrepreneur in the farming industry, and a man who never took no for an answer. He lied about his age to enlist in World War II but luckily for his wife, he did not go to the front lines. Calvin married Audrey Allison in October 1949. To diversify, he crop dusted and flew a little yellow plane over the Saskatchewan fields, and raised thousands of turkeys. He never complained, not ever.

His favourite pastimes were hunting, fishing, and spending time in Arizona. Before solving a problem, his grandkids would say WWCBD “what would Cal Barry do?”. The man was a legend. May we all take a note from Cal’s book. Ask for what you want, don’t take crumbs, and appreciate life. Cal had a special bond with his sons-in-law and the joke was they were the sons Audrey could not give him.

Calvin is survived by his wife, Audrey; daughters, Deb and Patti and their families – 4 grandchildren and 6 great-grandchildren; brother Wray; sister-in-law, Helen; as well as many nieces and nephews, cousins and friends.

In keeping with Calvin’s wishes, a Private Family Service will be held at a later date. In lieu of flowers, donations in Calvin’s name may be made to the WaWa Patient Travel Fund, 2065 Hamilton St, Regina, SK S4P 2E1.