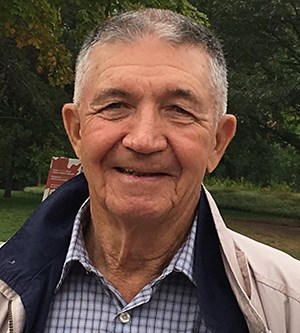 It is with great sadness that the family of Dick Allen announce his passing August 3 2019.

Born in Davidson, SK and the youngest of three children born to Stan and Theresa Allen (Webber), Dick’s family moved to Regina from their Davidson-area farm when he was in grade school, then later to Moose Jaw where Dick finished high school, graduating from Peacock Technical Institute.  After a short stint working with the railway, Dick began what would become a 35 year career with Sask-Tel.  Dick enjoyed the social aspects of his job as much as the technical work; he made life-long connections with people across the city and throughout the province.  Dick was also very proud of the several years he spent working as a part time soldier with the Saskatchewan Dragoons. Following his time with the Dragoons he remained connected with the military through many years as a member of the Royal Canadian Legion.

Dick married Moira Marlene Geddes in 1958 and together they raised three children: Pat, Jim and Donna.

As a passionate outdoorsman, Dick spent many years enjoying hunting and fishing in Saskatchewan and beyond.  He shared his love of the outdoors with his family; in the early years summer holidays were spent camping and later at the family cottage.  After retirement Dick and Moira took the opportunity to explore destinations beyond the confines of Saskatchewan including Bali, Mexico, Hawaii, Barbados and Arizona.

Dick was innovative and a “jack-of-all-trades”; there were few projects he thought to be too big to tackle.  Money may have factored into some decisions but Dick often chose to fabricate items rather than purchasing new, tackling many challenging projects including a boat, canoe, boatlift and a tent trailer.  He was exceptionally proud to work with his entire family in the construction of the cabin of his dreams at Buffalo Pound Lake.  The cabin remains a legacy of his skill, vision and dedication to his family.

A celebration of Dick’s life will be held at 4pm August 16, 2019 at the Masonic Temple, 1755 Main St N Moose Jaw.  In lieu of flowers, the family requests that donations be made to the Saskatchewan Wildlife Federation, Moose Jaw Branch.