TORONTO — Different team, different city, same scenario for Henoc Muamba. The veteran linebacker is in his first training camp with the Toronto Argonauts after signing with them in March.
Jul 22, 2021 3:54 PM By: Canadian Press 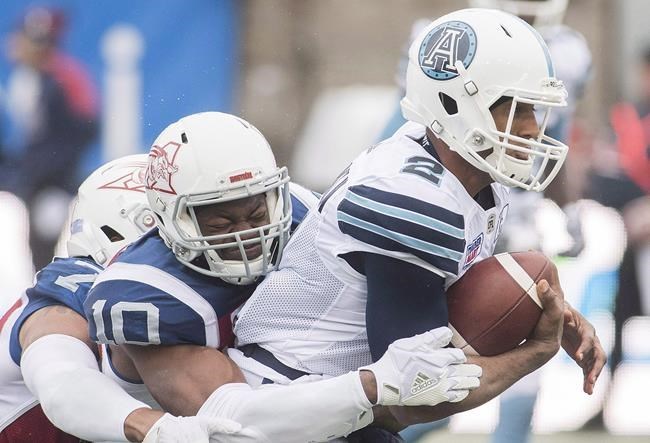 The veteran linebacker is in his first training camp with the Toronto Argonauts after signing with them in March. But change is nothing new for the 32-year-old, who's preparing to suit up for a sixth different team as he enters his 10th pro season.

"It's not my first time being in a new environment, new system, new defence and new city," Muamba said. "But it's been amazing.

"There's a lot of familiar faces regardless of the fact that it's a new team I haven't played for in the past."

There are many new faces at the University of Guelph with the Argos, who posted a 4-14 record in 2019, the last time the CFL played. Since then, the franchise has added new general manager Michael Clemons and head coach Ryan Dinwiddie as it looks to return to the playoffs for the first time since winning the '17 Grey Cup.

The six-foot, 230-pound Muamba was the CFL's top Canadian in 2019 and a league all-star after recording 93 tackles (second-most in the league), two forced fumbles and a sack with the Montreal Alouettes. A native of the Democratic Republic of Congo, Muamba grew up in Mississauga, Ont., before attending St. Francis Xavier University, where he was Canadian college football's top defensive player in 2010.

Winnipeg took Muamba first overall in the '11 CFL draft and he played three seasons in Manitoba before spending the '14 campaign with the NFL's Indianapolis Colts. Muamba returned to Canada in 2015, signing with Montreal before returning south with the Dallas Cowboys in 2016.

After being released by Dallas, Muamba signed with the Saskatchewan Roughriders and remained with them through the 2017 season before being let go. He rejoined the Alouettes before the 2018 campaign before becoming a free agent in February.

In 2019, Toronto finished ranked last overall in offensive points allowed (29.9 per game), rushing yards (118.6), TD passes (36), points off turnovers (39), tied for last in offensive TDs allowed (58) and seventh against the pass (314.6 yards per game). So it was no surprise the Argos added the likes of Muamba, rush ends Charleston Hughes, Shane Ray (former NFL first-round pick) and Canadian Cameron Judge, linebacker Dexter McCoil as well as defensive linemen Cordarro Law and Drake Nevis in preparation for the '21 season.

Dinwiddie said adjusting to new systems and schemes can be challenging for players. However, veterans like Muamba who've played for multiple teams can have the advantage of experience.

"They pick up a few different systems so they can see a new system in a new light," Dinwiddie said. "A guy who's been in one system his whole career is used to that and it takes a while to retrain themselves to learn some different schemes and different techniques."

Dinwiddie, in his first head-coaching post, has been impressed with Muamba in camp.

"Our linebacking corps is flying around ... those guys are good at everything. Glen (new Argos defensive coordinator Glen Young) has brought many new things that these guys haven't done and they've really bought in and I think it's going to elevate their game."

"He keeps telling us the type of defence we're trying to build is one that's intimidating, that's scary, that offences don't want to come and play against," Muamba said. "By the looks of it right now, we're looking pretty good ... we're not where we want to be yet but we're working toward that.

"But I'll tell you what, the style of defence we're going to play is exciting. There's a lot of guys that I think are really going to be surprises for a lot of people."

And while the abundance of new faces on Toronto's defence will need time to mesh, Muamba has been impressed with the players' work ethic in camp.

"The spirit of the team is amazing, the guys here really want to work," he said.

"It's really exciting to be around so many guys that have accomplished so much but yet still are eager and willing to work hard ... I really like what we have in the locker room right now."

This report by The Canadian Press was first published July 22, 2021.