Toronto FC took former New England Revolution forward Juan Agudelo in Stage 2 of the MLS re-entry draft on Tuesday. But whether the U.S. international ever pulls on a Toronto jersey remains to be seen.
Dec 3, 2019 4:58 PM By: Canadian Press 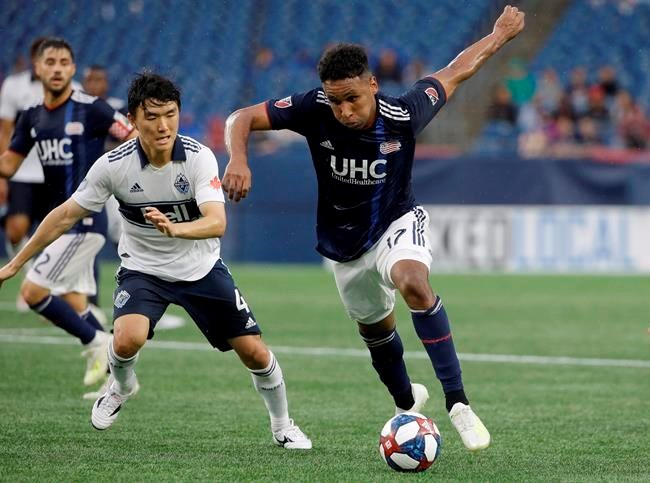 But whether the U.S. international ever pulls on a Toronto jersey remains to be seen.

At US$605,000 last season, Agudelo was the fourth-highest paid member of the Revs, who declined the option on his contract last month. In acquiring his rights, Toronto will be able to renegotiate his deal but may not be able to meet Agudelo's demands.

Toronto has stated a desire to add to its attack, which currently focuses around star striker Jozy Altidore and Spanish playmaker Alejandro Pozuelo.

Most observers thought the extra offence would come in the form of a new designated player with captain Michael Bradley, whose $39-million, six-year contract is expiring, agreeing to a lesser contract using targeted allocation money — freeing up a third DP spot.

Agudelo adds a twist to the mix. While his salary is likely too rich for Toronto, there is no cost to GM Ali Curtis testing the waters.

"Juan is a talented veteran player that we believe would add depth to our group of strikers," Curtis said in a statement. "Selecting Juan in Stage 2 doesn't ensure that he will be with us next year. Selecting him effectively gives us the right to have a conversation and try to negotiate a contract. If we do not reach an agreement with Juan, then he will be made available to other MLS clubs."

The 27-year-old Agudelo, who has won 28 caps with three goals for the U.S., made headlines as a teenager but is coming off an unspectacular season that saw him play in a variety of positions for New England.

Agudelo scored on his national team debut at 17 in a 1-1 over South Africa in the final of the 2010 Nelson Mandela Challenge in Cape Town. Six days shy of his 18th birthday, he became the youngest player in U.S. men's national team history to score.

In March 2011, he scored in his second senior game — coming off the bench to record the tying goal in a 1-1 tie with Argentina in East Rutherford, N.J.

Agudelo signed a deal with England's Stoke City in August 2013 but did not receive a work permit. He spent time with FC Utrecht in the Netherlands before returning to New England.

The only other player taken Tuesday was former Seattle defender Saad Abdul-Salaam, selected by FC Cincinnati.

Those players are now available to all teams on a first-come, first-served basis.

In other league news Tuesday, MLS proved it had a long memory by fining Toronto striker Jozy Altidore for unflattering post-game comments about the MLS Cup final officiating Nov. 10.

Altidore and other members of Toronto FC were irate that a foul was not called against the Sounders in the buildup to the opening goal of the final, won 3-1 by Seattle.

"There's a foul on Osorio before but we know that, we know the standard of MLS refereeing is next to horrible," Altidore told reporters after the match. "So you can't count on them bailing you out on anything.''

The league also fined Whitecaps head coach Marc Dos Santos for comments regarding the league in a interview published Nov. 4.

The league did not detail the size of the fines.

MLS, meanwhile, has opted to have Inter Miami CF join the Eastern Conference while fellow expansion side Nashville SC plays in the West.

The split means both conferences will have 13 clubs in 2020.

Each club will continue to play a 34-game regular season with 17 home matches and 17 away matches. Teams will play clubs within their conference home and away with the other 10 regular-season matches coming against the opposite conference.

This report by The Canadian Press was first published Dec. 3, 2019.