Toronto FC striker Jozy Altidore made the ultimate sacrifice for Game 7 of the Raptors' Eastern Conference semifinal against Philadelphia.
May 15, 2019 6:00 AM By: Canadian Press 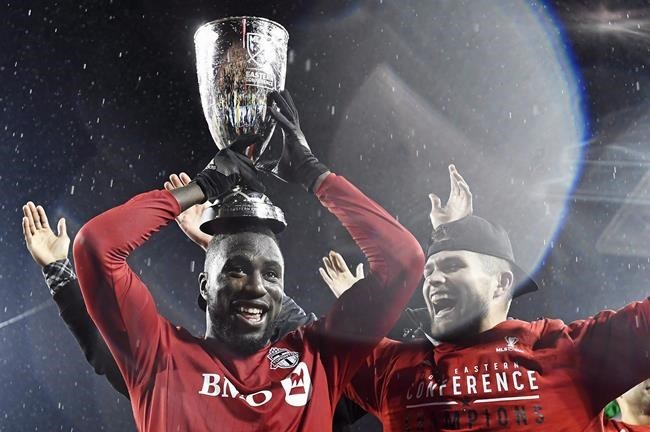 Toronto FC striker Jozy Altidore made the ultimate sacrifice for Game 7 of the Raptors' Eastern Conference semifinal against Philadelphia.

A huge fan of "Game of Thrones," Altidore and Toronto teammate Eriq Zavaleta put the penultimate episode of the hit TV show on pause to watch the Raptors finale.

"What can you say, man? We were yelling and going crazy just like everybody else," Altidore said. "I'm just so pleased for the Raptors, for the fans in Toronto.

"I just can't wait for Game 1 (of the Eastern final against Milwaukee on Wednesday) ... I hope everybody gets out there and supports them because they need it and there's something special there.

"Hopefully they can make a run to the (NBA) finals because the city would go nuts, It would be crazy."

Altidore is also a fan of Raptors star Kawhi Leonard, who stepped up with Sunday's buzzer-beater.

"Kawhi's the man, bro ... He moves so effortlessly around the court," said Altidore, no stranger to clutch performances himself. "There's not one thing he's bad at really, in my opinion."

"He reminds me a little of MJ (Michael Jordan) and Kobe (Bryant) in the way he plays and his killer mentality."

"My kids were in bed and supposed to be sleeping at the time," he recalled. "And the ball comes in and (Leonard) gets the shot and it just hung on the rim. As soon as it dropped I screamed so loud that my wife looked back at me like 'Are you crazy?'

"The kids came running down from upstairs ... (saying) 'What happened, what happened?' Then we relived it five more times.

"Look I'm ecstatic for the Raptors, for (co-owner) Larry (Tanenbaum) and the ownership group, for the fans. Because sometimes you need those moments to take you out of this feeling like 'It's never going to be us' to 'Why not us?'

"I think there are epiphany moments in sports where sometimes as fans or as an organization you need those little transitions ... I think that was one of those moments where the ball falls your way in the biggest of situations. Hopefully the club, the team, everybody, the city feels like 'Why not the Raptors?' and 'Why not this year?' and can just jump on that and support them through it."

Vanney pointed to Will Johnson's 95th-minute goal in the return leg of the 2016 Canadian Championship final against Vancouver as one such moment for TFC. The series ended in a 2-2 draw with Toronto hoisting the Voyageurs Cup on the away goals rule.

He also cited the October 2015 Sebastian Giovinco goal against the New York Red Bulls that put Toronto into the playoffs for the first time and the comeback win over the Montreal Impact in the 2016 Eastern Conference final.

"It was like this epic series that when you get over the top of that you kind of believe you can do anything ... I think it just kind of shifted the whole mentality of the group in a way that we didn't look back for a long time," Vanney said. "And I think we're not going to look back."