ANAHEIM, Calif. — Mikael Backlund and Mark Jankowski scored two goals apiece, and Cam Talbot made a career-high 44 saves for his 21st career shutout in the Flames' 6-0 victory over the Anaheim Ducks on Thursday night.
Feb 14, 2020 12:32 AM By: Canadian Press 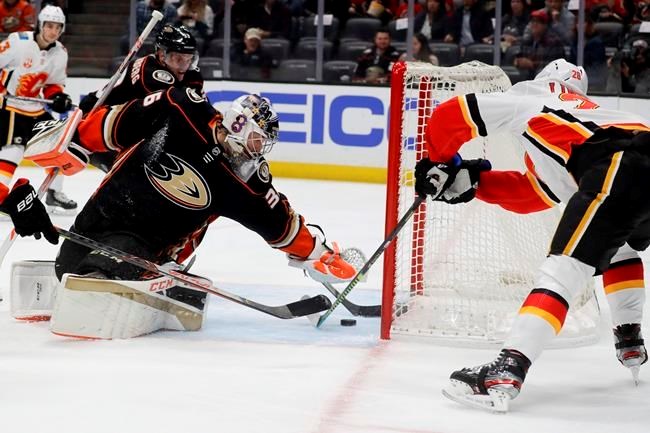 ANAHEIM, Calif. — Mikael Backlund and Mark Jankowski scored two goals apiece, and Cam Talbot made a career-high 44 saves for his 21st career shutout in the Flames' 6-0 victory over the Anaheim Ducks on Thursday night.

The Ducks gave up four goals in the first period of their first game since since their game against St. Louis was called off Tuesday night when Blues Jay Bouwmeester collapsed on the Honda Center bench during the first period.

Talbot was superb in his first shutout for the Flames and his first victory since Jan. 11, making 18 saves in the second period alone.

“I felt like I controlled the game the best I could,” Talbot said. “I didn’t leave too much laying around for them to bang in. A lot of their shots came from the outside, makes it easy for me to control it.”

Elias Lindholm, Oliver Kylington, Backlund and Jankowski all scored for Calgary during that one-sided opening period. Lindholm extended his scoring streak to nine games, one shy of his career high, with his 25th goal.

“We got some timely scoring early,” Calgary coach Geoff Ward said. “I liked the response of our guys. We talked about how important it was to come out and play a solid first period, get into the game early. I thought the guys did a good job of that.”

John Gibson stopped 12 shots in Anaheim's awful first period before Ryan Miller replaced him to start the second. The Ducks' season-best streak of five straight games with a point ended with just their second regulation loss in eight games.

“We learn from these,” Ducks coach Dallas Eakins said. “As much as you want to keep point streaks going, I think a kick in the rear end is good for you every once and a while.”

Backlund got a short-handed goal in the second period for his 14th career multi-goal game, his first since March 10.

Calgary finished its four-game road trip with three wins in the first of two games between the Pacific Division rivals in five days.

Lindholm opened the scoring moments after a power play expired in the first period, finishing a scramble near the Ducks' net by stuffing the puck past Gibson's short side.

“We had breakdowns,” Ducks forward Troy Terry said. “This really goes for myself, but we need to score on our chances. ... We need to have more jam than that. It was one of those nights where we just couldn’t figure it out.”

Lindholm, who isn't related to Ducks Hampus Lindholm, is already approaching the career high of 27 goals last season with Calgary after spending his first five NHL campaigns with Carolina. He scored two goals Wednesday during Calgary's loss to the last-place Los Angeles Kings.

Backlund extended his scoring streak to five games by converting a pass from Andrew Mangiapane. Just 1:29 later, Kylington beat Gibson high to the glove side for the 22-year-old Swede's second goal of the season and fifth of his NHL career.

Jankowski then put an unobstructed shot past Gibson's glove while skating up the middle during an odd-man rush 55 seconds before the first period ended.

Backlund got his short-handed goal late in the second, and Jankowski added another goal off his own rebound in the third. He has scored five goals in his last seven games after failing to score in his first 38 this season.

“I think ever since I got that first one in Ottawa, the weight was lifted off my shoulders,” Jankowski said. “I was able to play a little bit more freely. It definitely feels good."

NOTES: The Flames lost 25 consecutive regular-season games in Anaheim between January 2004 and October 2017, but they have won in both of their trips to Honda Center this season. ... The teams meet again Monday in Calgary. ... The Ducks and Blues still haven't settled on a rescheduled date for their postponed game, but Honda Center fans will be allowed to use their tickets from Tuesday for admission. ... Calgary captain Mark Giordano missed his fifth straight game with a hamstring injury. ... F Sam Bennett returned to the Flames' lineup, and Tobias Rieder was scratched.