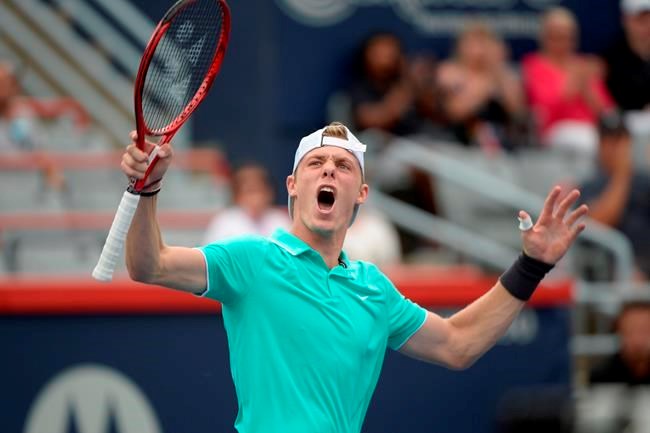 CINCINNATI — Canada's Denis Shapovalov roared back from a bad first set to post a 2-6, 6-3, 6-2 win over lucky loser Joao Sousa of Portugal in first-round action Tuesday at the Western & Southern Masters 1000 tennis tournament.

Shapovalov, from Richmond Hill, Ont., won on his first match point when his forehand was sent into the net by Sousa.

It was the second tournament in a row that Shapovalov, ranked 34th in the world, won his first match. He had five-match losing streak — part of a  2-9 run dating back to March —heading into last week's Rogers Cup men's tournament in Montreal. He beat France's Pierre-Hugues Herbert in the first round in Montreal to end his run of futility before falling to world No. 4 Dominic Thiem.

It looked like Shapovalov's struggles might continue against world No. 43 Sousa, who beat the Canadian in the only other meeting between the players — a 6-4, 4-6, 6-4 win in Auckland, New Zealand, back in January.

Sousa broke Shapovalov in the match's first game and looked to be in complete control as he cruised to a 6-2 first-set win.

Shapovalov got back into the match with a confident second set. He won the first game with an ace, then broke Sousa to go up 2-0. He went up 3-0 after a nervy hold that went to deuce twice, and then held the rest of the way to even the match at one set apiece.

The Canadian continued to apply pressure, breaking Sousa to open the third set. He broke Sousa again to go up 4-1, then won wile serving for the match in the eighth game of the set.

Shapovalov hit 28 winners compared to seven for Sousa, who advanced into the main draw in Cincinnati after 10th seed Fabio Fognini of Italy withdrew. However, Shapovalov also had 31 unforced errors — many of them coming in his error-prone opening set, to just 19 for Sousa. The inconsistency could also be seen in Shapovalov's serve. He had five aces, but also hit into six double-faults.

Next up for Shapovalov id Frenchman Lucas Pouille, who advanced with a 6-3, 7-6 (6) win over American qualifier Denis Kudla.