BRISBANE, Australia — Canada's Milos Raonic advanced to the quarterfinals at the Brisbane International on Wednesday by downing Miomir Kecmanovic of Serbia 6-3, 7-6 (2).
0
Jan 2, 2019 8:24 AM By: Canadian Press 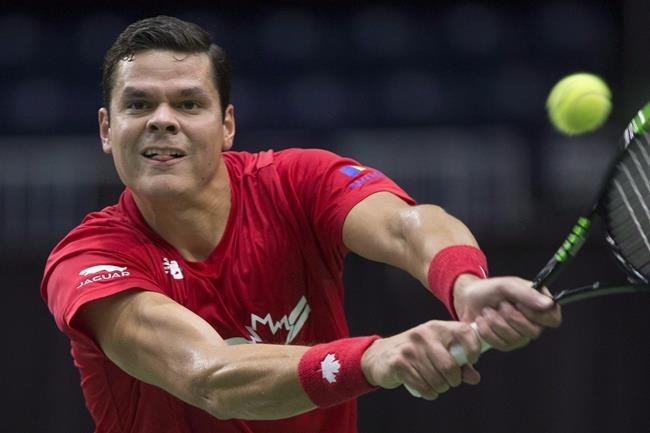 BRISBANE, Australia — Canada's Milos Raonic advanced to the quarterfinals at the Brisbane International on Wednesday by downing Miomir Kecmanovic of Serbia 6-3, 7-6 (2).

The 28-year-old Raonic will face fourth-seeded Daniil Medvedev of Russia in the quarters.

Raonic recorded a mini break on Kecmanovic's first serve in the second-set tiebreak, then did that again twice more to go up 6-2 and 7-2 to win the match.

The Thornhill, Ont., product and former world No. 3 is starting the 2019 tennis season ranked No. 18 in the world after battling injuries over the last two years.

Raonic, Canada's top-ranked player, has done well in Brisbane in the past. He captured the title there in 2016 after stunning Swiss superstar Roger Federer in the final and was a runner-up at the event in 2015. He also reached the semifinals twice.

Raonic downed Aljaz Bedene 6-0 6-3 in the first round on Monday to advance to the Wednesday's second-round matchup at the ATP 250 event.

Wednesday's match was the first career meeting between Raonic and his 131st-ranked opponent.

He overpowered the 19-year-old Kecmanovic with his powerful serve in a quick first set that lasted just 27 minutes, firing seven aces and winning 13-of-18 first-service points.

Raonic broke Kecmanovic to go up 4-2 in the first set and easily held on from there.

The Canadian had 21 aces in total to Kecmanovic's three.

Raonic is 0-1 against Medvedev, losing in Tokyo on a hard court last year.