MONTREAL — The owner of Montreal's Major League Soccer Club knows change won't be easy for fans. After 28 years as the Montreal Impact, the team announced Thursday that it is rebranding as Club de Foot Montreal — or CF Montreal.
Jan 14, 2021 5:32 PM By: Canadian Press 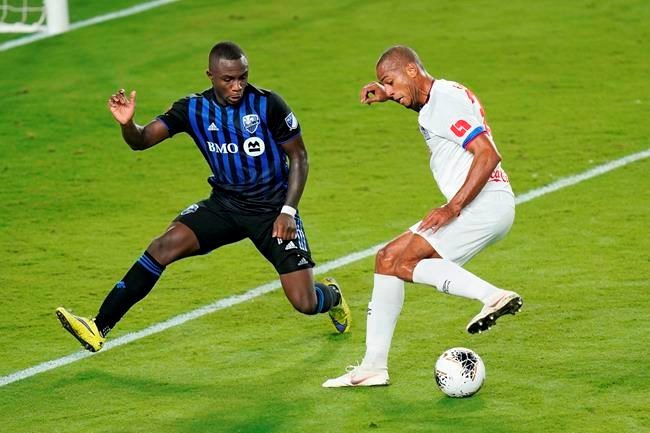 After 28 years as the Montreal Impact, the team announced Thursday that it is rebranding as Club de Foot Montreal — or CF Montreal.

“I understand how you feel. I love the Impact," owner Joey Saputo said in a virtual press conference. "It’s hard to let go of things you love. But here’s the reality — to make an impact, we need to retire the Impact.”

Along with the new name, the club has replaced the Impact's shield logo with a round black badge rimmed with blue and featuring a grey snowflake.

Designer Justin Kingsley said the creative team wanted to hearken back to some key Montreal moments with their work, including the 1976 Montreal Olympics and Expo 67.

He knows there will be naysayers who will see the snowflake as a weakness and use it as a criticism of the club's on-field performance.

"Go ahead and underestimate our team," Kingsley said. "We are all individuals and we are all unique. But when we come together, we form that impenetrable wall. Good luck to you defeating our storm, our blizzard.”

The team also has a new slogan: "droit devant or," in English, "always forward."

The rebranding is about building a collective, Saputo said.

“We’re telling a story about the way Montrealers live, the way we are, who we are, here on our island," he said.

Some fans were quick to express their displeasure with the new identity.

"Is this all a joke?" one post read in French.

The change had been controversial even before the new name and look were unveiled, with more than 2,000 soccer fans signing an online petition calling for the Impact to keep its name. The petition said the change will cause a "rift" between the team and its fanbase.

One of the club's key players said he approves of the rebrand.

“I think it’s great. I think it was time for my club to have a different impact," midfielder Samuel Piette said Thursday from Bradenton, Fla., where he's training with the Canadian national team.

A lot of research and work went into the new identity, said Piette, who grew up in Le Gardeur, Que., outside of Montreal and has played four seasons with the Impact.

"What we see is the logo but I think everything behind it has been very well done," he said. "I know there’ll be some critics … but at the end of the day, it’s all about representing the city.”

The club has been known as the Impact since it joined the American Professional Soccer League in 1992 following the dissolution of its predecessor, the Montreal Supra.

Saputo chose the name because he wanted the franchise to make an impact on the city and local soccer community.

The rebrand reflects how the club's position in the community has changed, said Kevin Gilmore, the team's president.

“We’ve gone from having an impact to assuming a responsibility as a professional sports team of representing our city and our people," he said Thursday.

Gilmore acknowledged that some people won't agree, while others will be upset or even hurt by the change.

He hopes the Montreal-centric approach that the club has taken will help.

"We hope that resonates with people and that eventually they will be as passionate, if not more passionate, about our club and ultimately our brand, as they are now," he said.

Montreal made its MLS debut in 2012. In 2015, the team finished a franchise-best third place in the Eastern Division before being ousted from the playoffs in the quarterfinals by the Columbus Crew.

Montreal reached the conference final in 2016 but lost to Toronto FC.

Then, ahead of the 2020 season, the club hired former Belgian goalkeeper Olivier Renard as sporting director and famed French striker Thierry Henry as head coach.

“The fact that we brought in Olivier and Thierry isn’t an coincidence," Gilmore said. "That gives us visibility on a stage far greater than this city and this province. And this rebrand does that as well.”

Last season, the club finished ninth in the East with an 8-13-2 record after COVID-19 restrictions forced all three Canadian MLS squads to relocate south of the border in mid-September.

The New England Revolution eliminated Montreal from the playoffs in the qualifying round.

It's been a busy off-season for the club, with Renard bringing in several emerging players from around the globe. Montreal announced its latest acquisition Wednesday, signing 18-year-old Nigerian striker Sunusi Ibrahim.

“I’m very excited to see some of the youngsters that we brought into the club and see where they can bring us," Henry said from his home in London on Thursday. "Hopefully we will have less stops this year in order to carry momentum in terms of what we want to do on the field.”

MLS commissioner Don Garber has said the league is targeting mid-March to start the 2021 campaign.

Bob Foose, head of the MLS Players Association, said this week that the "best solution" for Canadian teams would be delaying the start of the season since the Canada-U. S. border remains closed.

Montreal is already looking at different plans for the 2021 season, Gilmore said.

“2021 has its challenges," he said. "There’s light at the end of the tunnel, I just don’t know how long the tunnel is.

"We know that at some point the combination of safety measures and vaccines will allow us to get back to normal, we hope sooner than later. But in the meantime, we just have to be prepared for multiple scenarios.”

This report by The Canadian Press was first published Jan. 14, 2021.