Montreal Impact coach Remi Garde insists he's not too concerned by his team's lack of scoring, despite being mired in the worst offensive slump in Major League Soccer.
Apr 23, 2019 11:04 AM By: Canadian Press 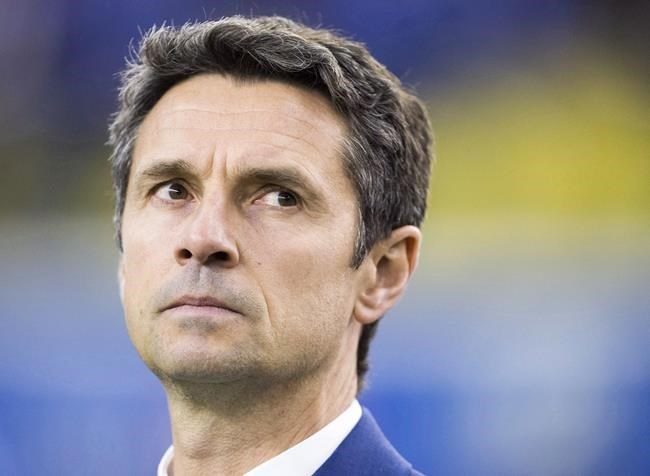 Montreal Impact coach Remi Garde insists he's not too concerned by his team's lack of scoring, despite being mired in the worst offensive slump in Major League Soccer.

The Impact (3-3-2) will look to jump-start their offence when they face the New England Revolution (2-5-1) on Wednesday —  Montreal's eighth road game of the season.

Garde's men have scored two goals in the last five games, all without star midfielder Ignacio Piatti (right knee injury), who will remain sidelined on Wednesday.

"I'm not losing sleep because I know we can do better," Garde said after training on Monday. "Let's not forget our best player is absent. If you take away any team's best player, with so many games on the road, I'm not sure they would fare much better.

"This is a special situation to deal with. It requires mental toughness. It's asking a lot of my players."

Montreal's current scoring slump is tied for worst in the league with the Vancouver Whitecaps.

The Impact are coming off a 3-0 defeat in Philadelphia last Saturday when the visitors managed just one shot on target.

"If it was simple to explain, we would have an answer," defender Bacary Sagna said of the team's scoring woes. "(In Philadelphia), we lacked cohesion. Not just offensively. The whole team needs to be more creative. Maybe we need to take more risks offensively, send more players up front."

No player has managed to take charge of Montreal's offence in Piatti's absence.

Striker Maximiliano Urruti has yet to score this season, though he leads the club with three assists. Midfielders Harry Novillo and Orji Okwonkwo have each scored one goal.

"(Urruti) is too isolated on the pitch at times," said Garde, the former Lyon and Aston Villa coach. "The supporting players aren't getting there fast enough. But when we start playing home games, and we have more possession in the attacking half, he'll have better attacking options.”

Designated player Saphir Taider leads the team with three goals (tied with Piatti) but the Algerian international is questionable for the game in New England. Taider suffered an injury against the Union over the weekend and did not play the second half. The 27-year-old, on loan from Bologna, trained apart from his teammates this week.

That means expectations are high for newly signed Panamanian attacking midfielder Omar Browne, who is eligible to make his Impact debut. The 24-year-old did not play in Philadelphia because he did not have the appropriate paperwork. The Impact sorted that issue out this week.

Browne previously spent his entire career in Panama's first division, scoring 19 goals in 88 appearances. Garde would not reveal if he would start the match or come off the bench.

Meanwhile, the Revolution are in a scoring skid of their own. New England has netted six goals all season, and three in the last five games. Only Atlanta has scored fewer goals this year.

The Revs, under second-year coach Brad Friedel, are coming off a well-deserved 1-0 win at home against the New York Red Bulls. Ecuadoran forward Cristian Penilla scored in the 73rd minute. It was New England’s first clean sheet of the season.

"We just have to keep working, try to keep giving the guys confidence in training," Friedel told the team’s website this week. "I'm sure the ball will start finding the back of the net soon because we're getting into a lot of really good positions."

GOT YOUR NUMBER: The Revolution have won six of the last seven meetings against Montreal. They've also won the last four matchups at home, outscoring the Impact 9-0 in the process.

HELPLESS AT HOME: New England has already lost three games at Gillette Stadium this season, all by a 2-0 score. They are 2-3-0 at home this year.

BUSY WEEK: Montreal is in a stretch of three games in eight days. The Impact played last Saturday in Philly. They play Wednesday in New England before hosting the Chicago Fire at Saputo Stadium on Sunday.

IN NEED OF GOALS: Both Montreal and New England have a minus-6 goal differential, tied for worst in the Eastern Conference.