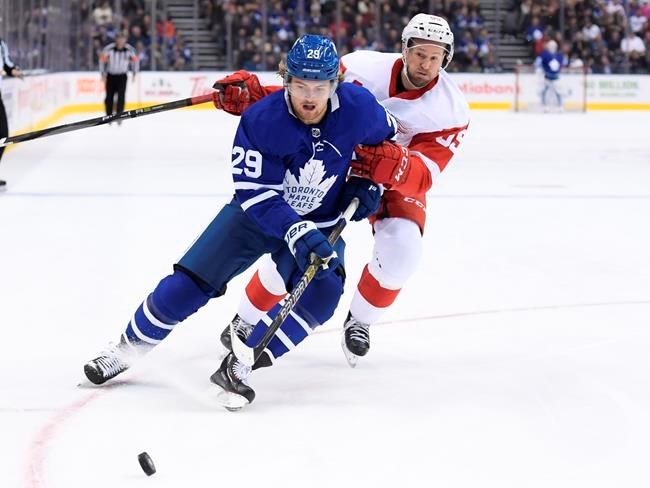 That was probably asking too much of a player making his season debut with exactly zero practice time since ending a prolonged contract impasse with Toronto just last weekend.

The rest of Babcock's team, which eventually showed signs life after a lacklustre opening 40 minutes, didn't really have an excuse.

Dylan Larkin scored at 2:48 of overtime as the Detroit Red Wings survived a blown three-goal lead in the third period to down the Leafs 5-4 and snap Toronto's five-game winning streak.

"They were just better than us," Babcock said. "They played harder."

Nylander agreed to a six-year, US$45-million deal minutes before Saturday's deadline for the restricted free agent to be eligible to play in the NHL this season.

He flew to Toronto on Sunday from Sweden, where he had been practising with a junior team, twice went through drills with a Leafs assistant coach and took part in Thursday's brief morning skate.

Coming off consecutive 61-point seasons, the 22-year-old finished with 12 minutes 29 seconds of ice time, but didn't see any action in the game's final 14:35.

"It has nothing to do with Willy, it has to do with me and trying to win the game," Babcock said of the benching. "Any time you've missed that amount of hockey, it's going to be hard."

Nylander, who got a mostly warm reception when he stepped on the ice for his first shift, started on a line with Auston Matthews and Patrick Marleau before sitting.

"It felt OK," Nylander said. "There's a lot of differences from practising by yourself."

After the Leafs stormed back with three goals in under nine minutes in the third to tie the game, Larkin moved in on a breakaway in the extra period off a pass over the top from Gustav Nyquist, who finished with a goal and two assists, and beat Garret Sparks on a deke.

"We were better than them for two periods," Detroit head coach Jeff Blashill said. "Our guys battled extremely hard and (I'm) proud of the way that they played."

Andreas Johnsson and Kasperi Kapanen, with a goal and an assist each, John Tavares and Zach Hyman replied for Toronto (20-8-1). Jake Gardiner chipped in with two assists.

Sparks made 27 saves for the Leafs as No. 1 goalie Frederik Andersen was given the night off after facing 40-plus shots in four straight starts.

"We were able to battle back and get a point and that's all kudos to the guys in front of me," Sparks said. "What happens from there ... got to make another save."

Toronto came to life in the third as Babcock shortened the bench and mixed his lines.

Tavares got the Leafs to within two when he ripped his 18th past Bernier at 2:38. Sparks, who had a shaky opening, made a nice pad stop on Larkin to keep his team within striking distance before Hyman potted his seventh on a rebound at 8:50 to get Toronto within one.

Johnsson then chipped his sixth over Bernier from in tight at 11:36 to make it 4-4 and send Scotiabank Arena into a frenzy.

Toronto's Connor Brown was stopped on a partial breakaway in the final minute before Nick Jensen hit both posts on a point shot that somehow stayed out at the other end with under 10 seconds to play.

The Leafs went up 1-0 at 4:50 of the first when Kapanen finished off a pretty passing play for his 11th, but the Wings struck back in quick succession to grab a 2-1 lead thanks to goals on two of their first three shots.

Ericsson floated his second from the point through a screen that Sparks could only wave at with the glove at 5:23 before Glendening fired upstairs for his fourth just 1:05 later for a Wings team that came in 2-3-2 over its last seven.

The Leafs didn't really threaten Bernier, who played three seasons in Toronto from 2013 to 2016, until Nazem Kadri rang a shot off iron from a sharp angle following two failed power-play attempts.

Nyquist then made it 3-1 with his seventh, and third in the last two games, on a delayed penalty with 12.2 seconds remaining before in the intermission.

Sparks settled down to make a desperation toe save on Andreas Athanasiou after the speedy centre blew past Ron Hainsey early in the second, but misplayed Green's third on another point shot at 11:07.

Matthews, who was playing his fourth game back following 14 spent on the shelf with a shoulder injury, took an awkward hit from Niklas Kronwall later in the second, but got up on his own before Toronto's third-period comeback.

"We did a real good job to get ourselves a point, but they were the team that deserved the two," Babcock said. "We didn't have enough hands on deck."

Notes: Members of the Humbolt Broncos and their families were in attendance. ... Kronwall played the 900th game of his career. ... Toronto opens a five-game road trip Saturday in Boston.