It wasn't quite the 21st birthday RJ Barrett envisioned. Instead of celebrating out on the town with friends and family, the New York Knicks guard marked the milestone in a hotel room in Tampa, Fla.
Jun 17, 2021 2:33 PM By: Canadian Press 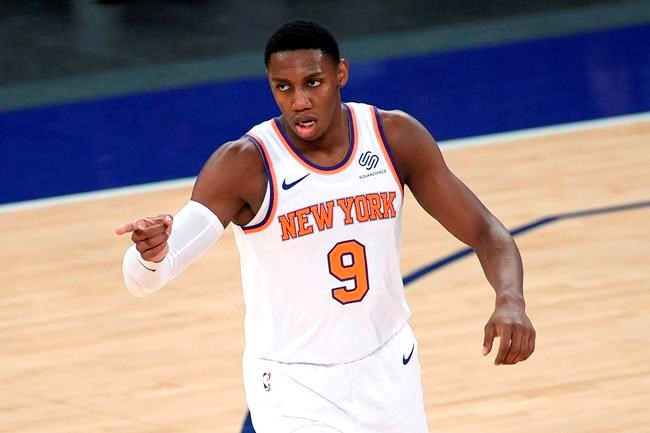 It wasn't quite the 21st birthday RJ Barrett envisioned.

Instead of celebrating out on the town with friends and family, the New York Knicks guard marked the milestone in a hotel room in Tampa, Fla., on Monday, waiting to join his Canadian national men's basketball teammates as they push for a spot at the Tokyo Olympics.

“That was annoying,” Barrett said with a laugh Thursday. “No, it was cool. I was just on the phone with everybody, family and stuff. Everybody made me feel special so it wasn’t too bad.”

Training camp in Florida is the first chance Canada's head coach, Nick Nurse, has had to watch Barrett work. So far, he likes what he sees.

“He’s very smart. He’s picking up everything just like that. He’s got kind of an infectious energy that he practises with," said the Toronto Raptors head coach. “He’s been really active and energetic and focused, concentrated, and smart.”

Picked No. 3 overall in the 2019 draft, the six-foot-six, 214-pound Toronto product has quickly adapted to the requirements and expectations placed on an NBA player, from training and maintaining his body to handling media and fans, he noted.

Barrett averaged 17.6 points, 5.8 rebounds and three assists over 72 regular-season games with New York this year, and 14.4 points in the playoffs before the Atlanta Hawks ousted the Knicks in a five-game first-round series.

“He’s playing in a major market at (a) very young (age) and he just kept plugging away at it," Nurse said. “I just keep saying ‘He’s 21.’ Anything’s possible for this guy where he’s at right now. I don’t know. But I say he made a huge leap this year. And that takes some getting used to. There’s some pretty good grown men playing in the league that he’s playing in. So to make a leap like that says a lot about him.”

Being back with the national team is big for Barrett, who led Canada to gold at the U19 World Cup in Egypt in 2017.

He calls the experience "the most special" of his basketball life.

In order to secure a spot in Tokyo, Canada will first need to win a six-team qualifying tournament taking place in Victoria, starting on June 29. The other countries in the competition include Greece, China, the Czech Republic, Turkey and Uruguay.

There are some minor rule changes and on the international stage, teams tend to be bigger, stronger and more physical, he explained.

"It's going to be different," he said. "In the NBA, you drive in the lane and a hand goes on you and it’s a call. Sometimes you might play pinball with a couple bodies in FIBA and there is no call. Just that part of it, I think, is the biggest thing.”

Barrett feels he's always played an international style of basketball, so he doesn't expect to make any major adjustments to his game this summer.

His time with the Knicks, though, has helped him take his game to another level as Canada looks to lock up an Olympic berth for the first time since the Sydney Games in 2000.

With a mix of nine NBA players and ample young talent, the Canadian squad is shaping up well, Barrett said.

“Everybody that steps on the court for us is a really good basketball player. I think this is perfect timing, I think everything’s shaping up well," he said, noting that veterans are in their prime and well versed in the game, while some of the more junior players bring their own experience.

"And I think when you put that together, along with the staff that we have, I think we’ll be good."

This report by The Canadian Press was first published June 17, 2021.