In The Rings: Gushue says talks with Curling Canada have been going well

TORONTO — Veteran skip Brad Gushue said recent talks with Curling Canada have been going well and he's hopeful that progress on a few areas of concern can be made by the summer.
Apr 23, 2019 3:02 PM By: Canadian Press 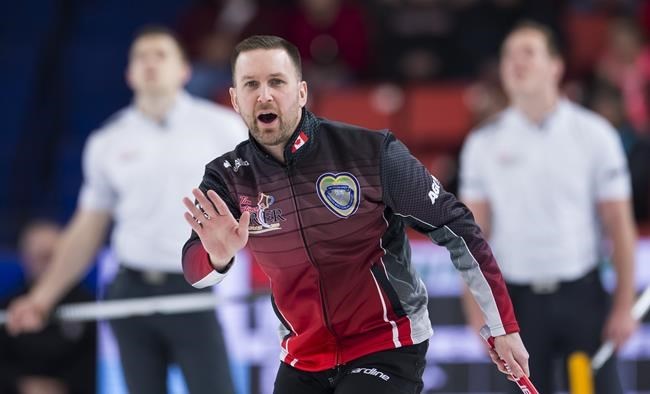 TORONTO — Veteran skip Brad Gushue said recent talks with Curling Canada have been going well and he's hopeful that progress on a few areas of concern can be made by the summer.

"I think they've been really good so far," Gushue said of the discussions. "We haven't got anything formal yet so I don't know if we're going to succeed in what we're attempting to do. But certainly they're receptive of what we've brought to their attention.

"They've got a lot of stuff to figure out on their end before they can get to what we want to. We're going to be patient as well and work with them."

Elite curlers do not have a formal players' association so athletes have to take concerns directly to the federation or competition organizers.

"Pay equity and cresting I think are the biggest (issues)," Gushue said. "There's no reason the women shouldn't be getting the same for winning the national championship as we do."

Most top-tier domestic curling events offer equal payouts. However, the winning team at the Tim Hortons Brier receives over two times the prize money given to the Scotties Tournament of Hearts champions.

Gushue also said that for teams to get to the point where they're truly professional, they need to have the right to wear their own cresting regardless of who is sponsoring an event.

"We're being forced right now to potentially wear companies that are competitors to our main sponsors, which is unheard of in most other sports," Gushue said in a recent interview. "So that needs to change."

In an email, a Curling Canada spokesman said that dialogue with the players would resume in the off-season and that dates have yet to be finalized.

Gushue said he helped get an informal group of top curlers together to raise concerns with federation brass. He'd eventually like to see the creation of a formal association to handle future relations, but a few hurdles remain.

"There's so much legwork into getting that done and also money to get it up and going," he said. "We have to find someone that has the time, the energy and the skillset to get that going for us. It's going to cost us money.

"Really we have to get all the top teams, all the teams that are here playing in the Slams to be on board with that."

Ben Hebert, who plays lead for Team Kevin Koe, has also been involved in talks. He agreed that a formal players' association would be a good addition.

"I do think we need one," he said. "We're discussing possibly doing one up. We'll see if we can get there."

The season concludes at the May 8-12 World Cup Grand Final in Beijing. The 2019-20 season will begin in late summer.

"It would be nice if we had someone maybe that wasn't full-time playing and training and practising to dig some teeth into some issues that maybe we want to fix," Hebert said. "But we're getting closer. Curling Canada did a good job this year. The Grand Slams are always open to player suggestions. We definitely need (a PA), I'm just not the guy to say exactly how that's going to go.

Fry is joining Epping's team at third next season with Mat Camm moving to second and Brent Laing shifting to lead. Marc Kennedy will take over at third on the Jacobs rink.

Epping's team, currently ranked sixth in the world, won the Masters this season but struggled with inconsistency.

"We were great sometimes and then we played like a junior team sometimes," Savill said. "So it was tough and it wasn't just one person. It was all the way down the line."

TICK TICK BOOM: A no-tick rule is being tested at the Champions Cup.

Players will not be allowed to make tick shots on rocks sitting on the centre line in the eighth or extra ends this week. The goal is to make the final ends less predictable.

There are several one-time lineups for the Grand Slam season finale.

Colton Lott is filling in for Brett Gallant on Team Brad Gushue while Lori Olson-Johns is subbing for Jocelyn Peterman on Team Jennifer Jones. Gallant and Peterman are representing Canada at the world mixed doubles championship in Norway.