In a season of uncertainty, Moore-Towers, Marinaro excited to get back on ice

Since the world championships were wiped out a year ago by COVID-19, it's been a stop-and-start season of cancellations and uncertainty for Canadian figure skaters.
Mar 16, 2021 2:47 PM By: Canadian Press 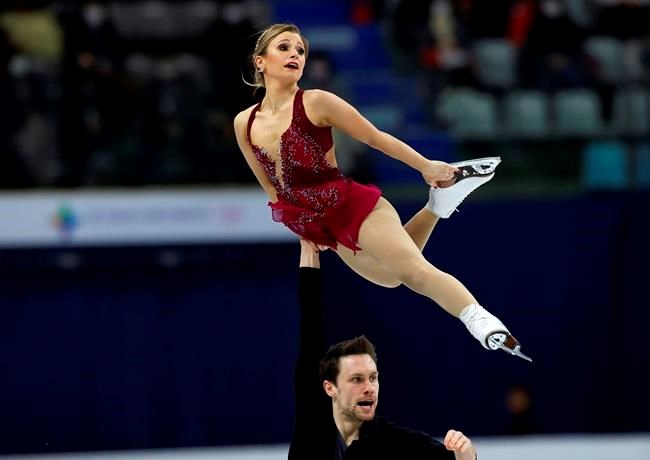 Since the world championships were wiped out a year ago by COVID-19, it's been a stop-and-start season of cancellations and uncertainty for Canadian figure skaters.

How crazy has it been? The world championships next week in Stockholm will be the first live competition for the Canadian team in more than a year.

"That's definitely the hardest part of the season," said Kirsten Moore-Towers. "There's a lot to be said for how much mental preparation — never mind physical — but how much mental stress goes into each event, so it has been extremely difficult to continue to mentally prepare yourself with things continue to get cancelled."

The 28-year-old from St. Catharines, Ont., and pairs partner Michael Marinaro of Sarnia, Ont., are part of Canada's team for the world championships, which begin next Monday and run through March 28.

They were coming off a pair of Grand Prix silver medals last season and had their hopes set on a podium finish at the worlds when the Montreal event was cancelled. The wave of cancellations swept through this season, erasing both Skate Canada International in Ottawa and the Canadian championships in Vancouver.

In a crucial pre-Olympic season, Skate Canada Challenge is the closest thing they've had to a competition. And it was a virtual event of pre-recorded programs completed on skaters' home rinks.

Up until a couple of weeks ago, there were no guarantees that next week's worlds in Stockholm would even happen. Moore-Towers and Marino half thought their season was already over.

"We understand the cancellations, but that doesn't necessarily make it any easier on the athletes who are trying to get their head wrapped around going to these events," Moore-Towers said.

"And we did not believe that worlds would take place. We didn't expect to have another competition."

Moore-Towers said they prepared as if there would be a worlds, but it wasn't until the International Skating Union announced that Stockholm would still be a key Olympic qualifying event that they decided they needed to be there.

The number of entries a country has in the Beijing Olympics is determined by the placings in Stockholm. If Canada has two athletes or teams with results that add up to 13 or less — so a sixth and seventh-place, for example — Canada can enter three in that event in Beijing. Two spots are reserved for countries whose skaters' results add up to 28 or less.

Moore-Towers said she and Marinaro owe their spot on the Pyeongchang Olympic team to this rule — and the Canadian teams that finished sixth and seventh at the 2017 worlds in Helsinki.

"Once we knew it was an Olympic qualifier, we knew for sure that we were going to do it," Moore-Towers said. "Now that I'm in a position where I have the ability to help a Canadian team earn a spot (for Beijing), I want to do that.

"We obviously are so grateful for those at the (2017) worlds because it allowed us to have our Olympic experience. So, it's an opportunity to pay it forward."

The global pandemic hit the pairs team hard off the ice as well. Marinaro's grandmother Charlotte Jones died of COVID-19 during an outbreak in her long-term care home in Sarnia last April. She was 88.

Now days away from boarding a flight to Sweden, the two said they're excited to get back on the competitive ice finally.

"I'm super excited to get out there on the competition ice again, it's been a long hiatus from those competition jitters that I'm extremely looking forward to," said Marinaro, 29.

"Before the pandemic, skating had become a little bit of a job for us and became a little bit monotonous, and having that layoff and that step away from competition just has rekindled the love for the sport."

Moore-Towers said they've been "pleasantly surprised" by how excited they are to compete.

"And of course there's a little bit of anxiousness over the unknown," Moore-Towers said. "Obviously, there are a lot of countries coming together. But we know that we'll do everything in our power to be safe."

Sweden has opted not to implement tight restrictions such as restaurant and school closures throughout the pandemic, despite cases climbing sharply again since the fall.

Moore-Towers said they'll be tested four times before competing. But critics had called on quarantining and a tighter bubble for the event — a petition to that effect has just under 3,000 signatures.

The two will have to quarantine for 14 days upon return in keeping with Canada's travel restrictions. They're not arguing.

"Over the past year with all the gym closures, the home gym has been added to and is looking pretty sweet," Marinaro said with a laugh. "So we have all the tools and everything we need to stay active during those days."

Moore-Towers said she'll be looking forward to the forced down time.

"We may have underestimated how tired we will be . . . we have been training so, so hard," she said. "A couple of weeks ago, we kind of looked each other at the end of the weekend, and said this is the hardest training week of our career."

This report by The Canadian Press was first published March 16, 2021.